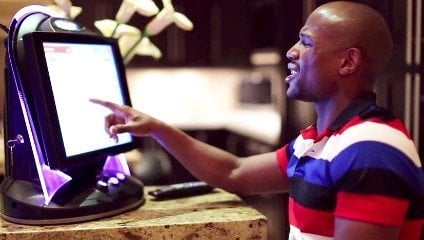 After the 37-year-old megastar has dealt with Maidana, it is possible British star Amir Khan could be next (assuming Khan gets past the dangerous and hungry Luis Collazo this coming Saturday on the under-card in Las Vegas). Khan could still be classed as a young gun himself, being just 27-years-old, but in comparison to Thurman (25) and Porter (26), Khan, who has been around at the highest level for some time, is something of a veteran.

But, assuming it is Khan for Floyd after Maidana, who will “Money” fight in his final two fights in his six-fight contract with Showtime? We know we can rule out Manny Pacquiao, that story grew old, old, old years ago, and Mayweather shows no inclination of making a potentially historic middleweight title challenger (many fans would love to see Floyd fight a guy with the initials/nickname “GGG.”) So it has to be a young gun next, right?

Mayweather taking on the likes of Thurman, Porter or Garcia would please the fans and the execs at Showtime, but will Floyd take a potentially risky assignment against a young and hungry warrior who simply doesn’t know how to lose? Porter, compared by some to a mini Mike Tyson, has impressed with wins over Devon Alexander and Paulie Malignaggi, while “One Time” Thurman has taken out good fighters Carlos Quintana, Jesus Soto Karass and Julio Diaz. The two seem destined to meet (although Porter’s mandatory and expected July foe Kell Brook will have something to say about that) and, by the time that fight has rolled around, the winner would perhaps be ready for the ultimate challenge: that of taking away Floyd’s perfect record.

Of course, many more fans feel it doesn’t matter who Mayweather fights in his remaining bouts before retiring, as he will walk away unbeaten anyway. But if any fighter is to have a chance of beating the master, it figures it will be a man much younger and hungrier than Floyd, and one who also possesses speed comparable to Mayweather’s. It could be argued that no fighter exists, but another growing thought is one that suggests Porter and Thurman might just fit such a lofty bill in another 12 months or so.