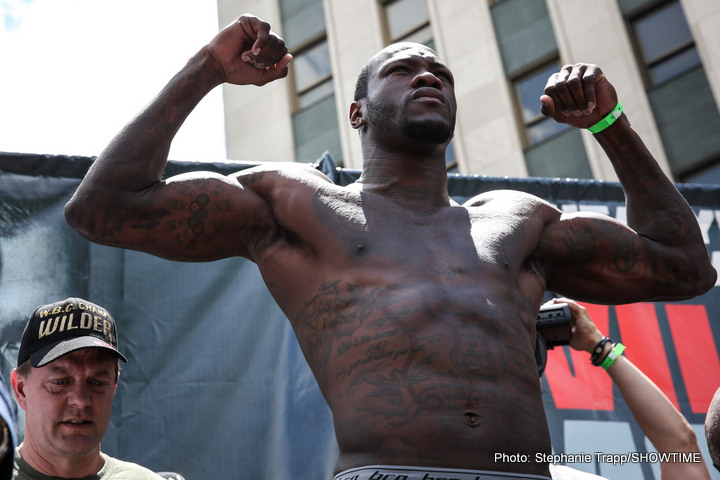 When Deontay Wilder steps through the ropes on Saturday to make the maiden defence of his WBC heavyweight title, those who follow boxing with a little bit more fervour than the man-in-the-street, will realize they are about to witness what should be nothing more than routine business for the big-punching Alabama born man.

Fighting in his home state, which will incidentally be hosting it’s first ever world title fight, “The Bronze Bomber” has promised his hometown fans that they will see a knockout performance from the man who has stopped all of his opponents – with the exception of Bermane Stiverne back in January.

Ever confident, and no doubt buoyed by the perceived easiness of the task in hand, Deontay got a little heated at the final presser this week, biting when elements of his unheralded opponent’s faction tried to rile him up – though clearly loving his moment behind the microphone and using it as any opportunity to try and sell the fight – which has been universally slammed by the majority of fans.

Speaking to media via Sky Sports, he promised that he is going to fulfill what’s expected and deliver in style;

“I’ve shown people what I can do and I can do it all – but I’m definitely known for my knock-out. I don’t have the highest knockout rate for nothing and I gotta get back at it.”

“I’ve definitely gotta knock him out.”

Molina has done his part of playing the opponent, which is all he can do I guess. He appears to know what he’s meant to say – attempting to draw comparisons with Oliver McCall stunning Lennox Lewis in 1994 and going as far as to promise Wilder there will be a rematch when he manages to upset the odds – yet it all just felt like paying lip service, with the Texan fighter’s tone having something of the resigned about it.

“I’m supposed to come in here and Wilder’s supposed to just run over me. (But) I’ve used it to motivate myself and I’ve never been stronger. I can punch just like he can punch and this is going to be an exciting heavyweight fight.”

Hopefully once this fight is out of the way, we then get to see Deontay in the mix with the elite guys and fighters in the top 10. His mandatory challenger is Russian Alexander Povetkin, who incidentally could may well secure home advantage for that one due to the deep pockets of his financiers.

After his dismantling of Mike Perez recently it appears he has regained his best form. With his only loss being a ruthless and one sided beating at the hands of Wladimir Klitschko – a fight it’s impossible to solely base his ability on – I’d say you’d have to fancy the former WBA (reg) champ to do the business against Wilder given that he has operated, and proven himself – at a level above .

Interestingly, the WBC have just revealed that they have installed Britain’s Anthony Joshua as #2, which while alarming to most people, is more a reflection of the path that Joshua is taking to a title rather than of the immediacy of him getting a shot.

However, one can’t help see that with such a high ranking, world titles are not too far away from Anthony Joshua’s sights – and a school of thought exists that whilst the experienced and dangerous Povetkin would be far too much for the Brit right now, a clash with Deontay Wilder is not an impossible ask – even tomorrow. In fact, it’s a fight Joshua has a very good chance of winning.

Pre-Stiverne, there is little to separate the two in terms of form, punch resistance, stamina etc.

But first Deontay must beat Molina on Saturday before we look farther ahead.

And everything tells us he will beat him.