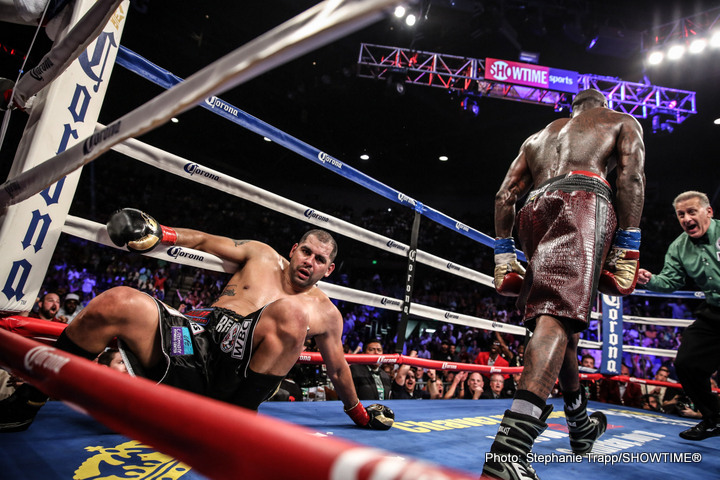 WBC heavyweight champion Deontay Wilder (34-0, 33 KOs) looked like a novice amateur tonight in having to work harder than expected to stop a very limited Eric Molina (23-3, 17 KOs) in the 9th round at the Bartow Arena in Birmingham, Alabama. Wilder took the 33-year-old Molina out with a chopping right hand to the head in the 9th.

This was one of four knockdowns that Wilder scored in the fight. Referee Jack Reiss stopped the fight at 1:03 of the 9th when it was clear that Molina was too hurt to get back to his feet.

Interestingly enough, the fight was actually competitive at times. Molina buzzed Wilder with a left hook to the head in the 3rd round, and he was in the position to finish Wilder off if he’d put some punches together after hurting him.

While that might seem like a good performance to some fans, you have to realize that Molina was a guy that would have likely been destroyed in one round by any halfway decent contender tonight.

The fact that it took Wilder nine rounds to finally get the 6’4″ Molina out is an indication of how truly poor Wilder was tonight. Wilder looked so bad that you have to wonder whether he’s going to be able to hold onto his WBC title for another fight. I think he’s coming to the end of his short title reign and I would be very surprised if he wins his next unless it’s against someone truly awful.