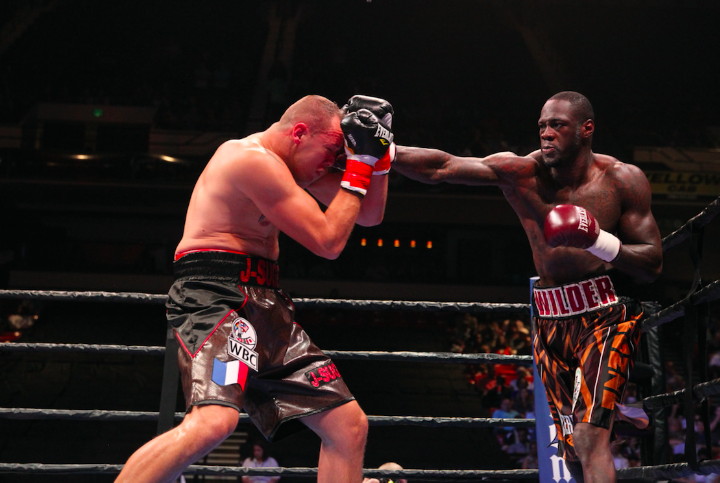 (Photo credit: Lucas Noonan/Premier Boxing Champions) WBC heavyweight champion Deontay Wilder (35-0, 34 KOs) registered his 34th knockout of his career against a very tough Johann Duhaupas (32-3, 20 KOs) in stopping him in the 11th round on Premier Boxing Champions on NBC from the Legacy Arena in Birmingham, Alabama. Wilder, 29, hurt Duhaupas with some brutally hard uppercuts in the 11th round.

Wilder then just kept throwing one devastating punch after another without stop until referee Jack Reiss jumped in between the two fighters and waived it off at 0:55 of the round. Duhaupas looked like he was going to keep fighting once Wilder stopped throwing punches, but the shots that Duhaupas was taking was just too brutal for the fight to have been allowed to continue.

Duhaupas should have considered halting the fight in the 10th round if not the 5th. Duhaupas took way too much punishment tonight for his own good, and he really wasn’t able to hurt Wilder with anything. The only problem Wilder had was a swollen eye, which gave Duhaupas at least a chance of a doctor stoppage.

In a robbery on the card, heavyweight prospect Dominic “Trouble” Breazeale (16-0, 14 KOs) won a 10 round unanimous decision victory over Fred Kassi (18-4-1, 10 KOs) in a fight that appeared to be a draw if not a victory for Kassi. The big 6’7″ Breazeale missed a lot of his punches during the fight, and he looked kind of sloppy and not all that powerful. Kassi clearly landed the harder and sharper shots.

I personally scored the fight a draw. I couldn’t give it to either guy. The judges’ scores were comical with them giving Breazeale the victory by the scores of 97-93, 98-92, and 100-90. None of those scores were valid. The fans at ringside booed the decision loudly, and they had no reason to care who won the fight because neither guy is from Alabama. They just felt that the wrong guy one the fight, or they thought it should have been a draw like I did.

Breazeale got the gift win, but he’s not going anywhere in my view. The controversial decision only is delaying the inevitable for Breazeale. He’s going to get beaten the first time he fights a decent heavyweight and when the judges actually score the fight correctly.