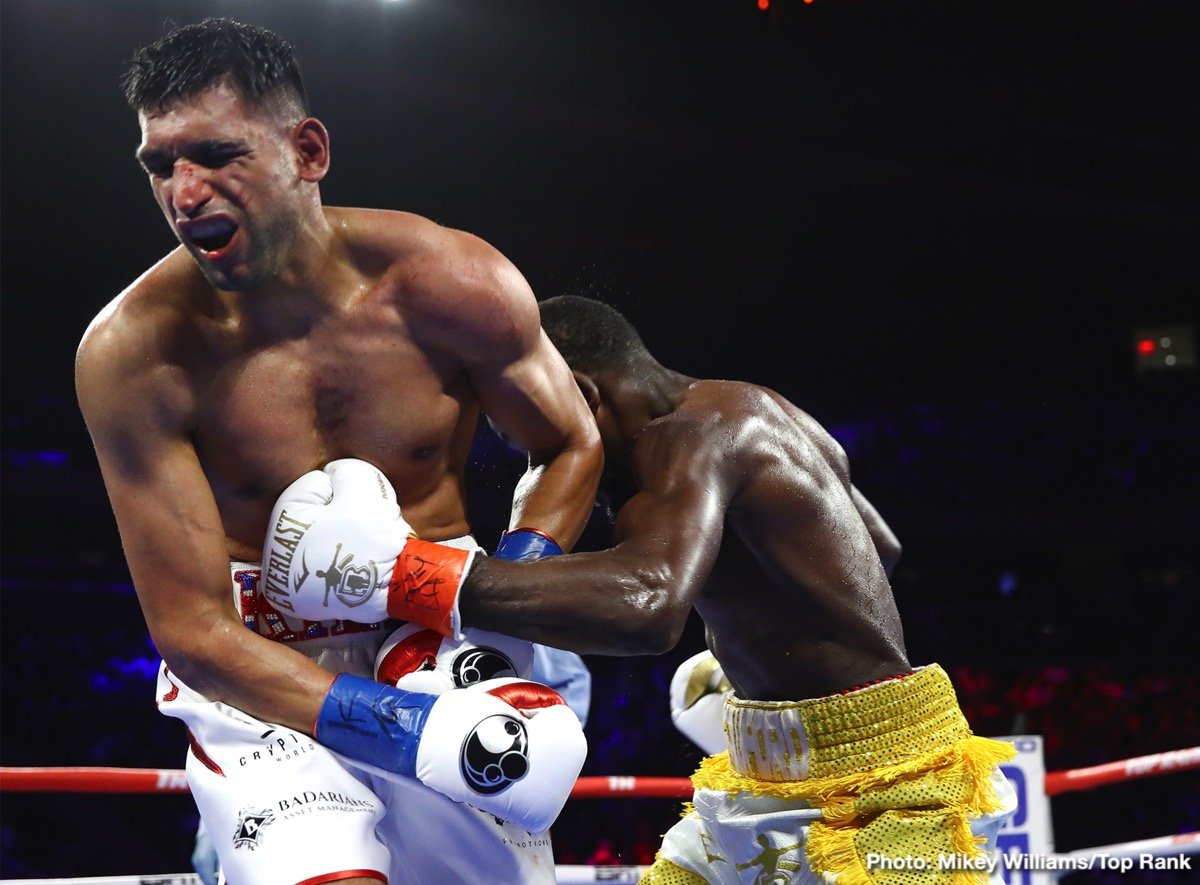 Did Amir Khan quit or not? This is the question people in boxing are asking themselves today after the quite odd ending that was witnessed in round six of Khan’s unsuccessful challenge of WBO welterweight champ Terence Crawford. And plenty of people think they have the answer: yes, Khan flat-out quit.

But Khan, a proven warrior, says he was in too much pain to go on after taking that hard and obvious low blow in the round in question, and his trainer Virgil Hunter agrees that Khan was “incapacitated” and was not looking for an easy way out. Let’s face it, capitulating is just not Khan’s style, never has been (look at all those brutal wars, fights in which Khan could so easily have quit but did not).

Still, the fact remains that Khan was getting seriously outclassed last night, as most if not all fans and experts felt would be the case going in. So what now? Is Khan done, or has he perhaps got one more fight left in him – with you know WHO, perhaps? Kell Brook, one of the many who says Khan did quit last night, would still make a good dance partner for his fellow Brit and the fight would still do good business here in the UK.

As a ‘loser must retire’ affair, with a big promotion – and perhaps a tag-line of ‘Better Late Than Never attached – Khan vs Brook would make money. And very possibly great entertainment. Fans have long since lost track on how long these two have been trading insult after insult and both men perhaps owe the public a fight.

Khan seems to have nowhere else on the big stage he could go, while Brook is in pretty much the same boat. If they want to carry on as they approach their mid-30s, Khan and Brook need each other. It’s far too early at this stage though for Khan to have any idea what he wants to do next. The former 140 pound champ may decide to call it a career after last night, his fifth defeat.

As for the unbeaten Crawford, his immediate future is clear in the collective minds of fight fans: a massive unification showdown with Errol Spence. Some people say Crawford has yet to face a truly elite operator at 147 pounds, that he has not yet been properly tested at the weight. This will change if and when Crawford gets it on with Spence.

Bob Arum said before last night’s fight that he would make endeavours to make the super-fight providing Crawford was victorious against Khan. Let’s all hope Arum is as good as his word and that he will get the ball rolling in a serious way regarding getting this potential classic made.

Fans need to see this one. Badly.