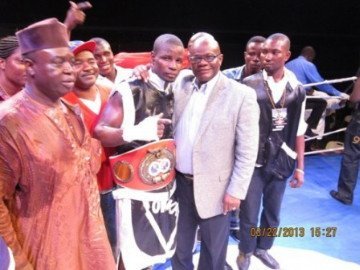 Getting opponents for Frederick Lawson, apparently is now a big ask, according to Alhaji Enusah but he remains defiant that Team Okumka will work very hard to push the boxer up to threshold of world title glory.

“We have a great plan for him but we have to be meticulous even though we fear no one inside the ring in world boxing. We know what we are doing, we are looking to make him a world champion and Insha Allah, he will be,” Alhaji Enusah told www.sportsinghana.com, confidently.

Alhaji Enusah who insists he is part of the managerial team of Lawson, maintains that the process of leading Okumka to world championship glory has to be well programmed involving all parties.

“It’s a complete team all working towards making him a world champion so I don’t take decisions alone. What is important is to instill in him the character of hard work and discipline. The so-called juju in boxing is discipline and we’ll make sure Frederick remains disciplined,” Alhaji Sally Enusah affirmed.