Teofimo Lopez and Pedro Campa both made weight on Friday at their weigh-in for Saturday’s main event fight on ESPN and ESPN+ at the Resorts World Las Vegas.

Teofimo (16-1, 12 KOs) is fighting for the firs time since losing his unified lightweight belts against George Kambosos Jr, and his promoters at Top Rank are going to be taking a close look at him to see where he’s at. 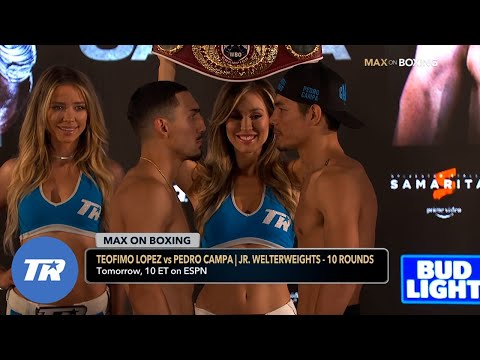 The way Teofimo fell apart mentally against Kambosos, some believe that he was never the fighter that Top Rank’s upper brass thought he was.

Although Teofimo beat Vasyl Lomachenko in 2020, he fought an injured fighter, and he had a huge size advantage. Teofimo was essentially a 140-pounder going up against an injured, one-armed 130-pounder.

“In our eyes and in his, do we look at the Kambosos results as a miscue, or is there something amiss with Teofimo?” said Top Rank president Todd Duboef to Fighthype.

“I think a lot of it is; how does he do at 140? How is his health, both physical, and we’ve heard some stories of mental health issues where he wasn’t so clear about where he was with his personal life? I think those are important things.

“Teofimo is going to have to have his A-game, and he’s going to have to work for it. This is like a true test, and when you have those types of fights, all of a sudden you change up on. Nobody saw that or projected that out. We’re going to see what he looks like,” said Duboef.