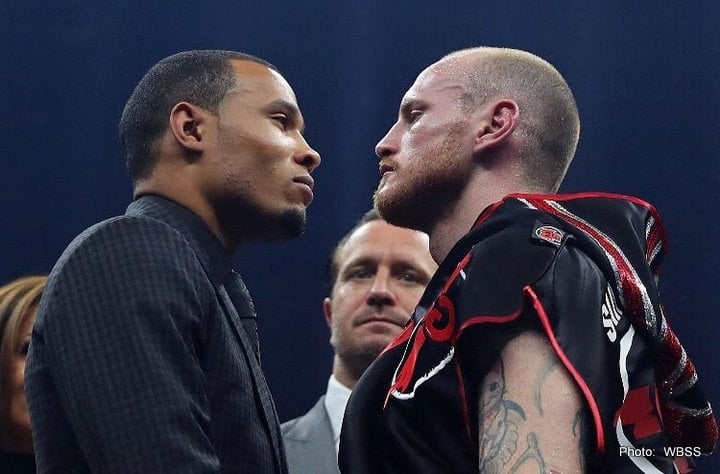 Simon Vallily has insisted that “Christmas is cancelled” as he focuses on his English title shot on the undercard of George Groves’ massive World Boxing Super Series clash against Chris Eubank Jr.

Sauerland Promotions have confirmed that MTK Global-managed cruiserweight Vallily will clash with defending English champion Arfan Iqbal on February 17 on a huge night for world boxing when Groves and Eubank meet in the WBSS super-middleweight semi-final at the Manchester Arena.

“It’s a brilliant opportunity for me, a good platform and a big stage for me to go out and show how good I really am,” said Vallily (12-1). “It’s good exposure and my first title shot as a professional. It will get my foot in the door and get me on the road to where I want to go.

“There’s no bigger card to be on next year, so it’s really exciting. I’ve got plenty of time to prepare, so I’ll be in the best shape I’ve ever been both physically and mentally,” continued the Middlesbrough man, who insists his Christmas dinner plans are cancelled as he prepares for his big shot.

“Christmas is cancelled this year! It’s not a problem for me because I’ve been waiting for an opportunity like this and I’ve got what I was wishing for – an early Christmas present. Now I just have to go out there and show what I’m all about when I’m physically and mentally switched on.

“I’ll be able to celebrate when I lift that belt. It’s exciting times and it’s given me a fire in my belly that I may have been lacking in the past.”

The 32-year-old Middlesbrough man is fully confident that he will overcome Derby’s undefeated Iqbal (12-0).

“I’ve never really come across him before, but I’m not too worried about what he’s going to bring to the table,” said Vallily.

“All I’m really focused on is myself. If I’m prepared and 100 per cent on my game, this kid will get taken to pieces,” added the Imran Naeem-trained fighter. “I’ll be in my best shape ever for this fight.”

The thrilling encounter will take place on the undercard of the World Boxing Super Series Super Middleweight Semi-Final clash between George Groves and Chris Eubank Jr.

Arfan Iqbal, the 26-year old current title holder from Derby, is delighted to be given a chance to showcase his skills on such a big show.

“I’ve been waiting for this opportunity my whole career,” said Iqbal.

“Vallily is a decent fighter. But you have to be a lot better than just ‘decent’ to beat me. He almost got stopped by a journeyman in his last fight, so just imagine what I will do to him.

I’ve knocked out opponents a lot stronger, more skillful and more experienced than Vallily before, so I predict that I’ll KO him early.”

“I’m so excited about this opportunity,” said Vallily.

“I’ve boxed on some big TV shows before but this is by far the biggest.

It will be a great honour to become English Champion, and it’s also a great stepping stone for me to go on and win bigger titles.

Iqbal and his team are a bit deluded, they’ve been deceived by my record and some of my performances. They’re in for a real shock come fight night! The best version of me will have no problems beating this guy.”

The Ali Trophy super middleweight semi-final between George Groves and Chris Eubank Jr. as well as the exciting undercard will be live on ITV Box Office on February 17.

Walsh vs. Lowe on Groves vs Eubank undercard in Manchester

“This is such a great platform for me to showcase my skills,” said 31-year-old Walsh.

“The Ali Trophy semi-final with Groves and Eubank is a mega fight, and I’m so happy that I am a part of this massive occasion.”

The intriguing match-up between Walsh and Lowe is more than just fight a between two skilled British featherweights. It is a genuine grudge match which began on social media:

“This is personal between me and Lowe. I’m going to make him pay for every stupid thing he has tweeted,” said Walsh, the defending British champion.

“Lowe is good, young talented and hungry fighter. But he seems to be a very angry person. If you tweet up, be prepared to get beat up. And that’s what I’m going to do. I’m going to beat him up and teach him a life lesson.”

Lowe revealed his delight to be boxing in his hometown of Manchester once again, and the 23-year old insists that the pair’s styles will gel perfectly to make a crowd-pleasing encounter.

“I’m so pleased to be boxing again in Manchester in front of all my own fans. I cannot wait to finally prove myself on this platform and make a massive statement. The fans better get their popcorn ready, because this has the potential to be the fight of the year!”

The Ali Trophy super middleweight semi-final between George Groves and Chris Eubank Jr. and Walsh vs. Lowe will be live on ITV Box Office on February 17.