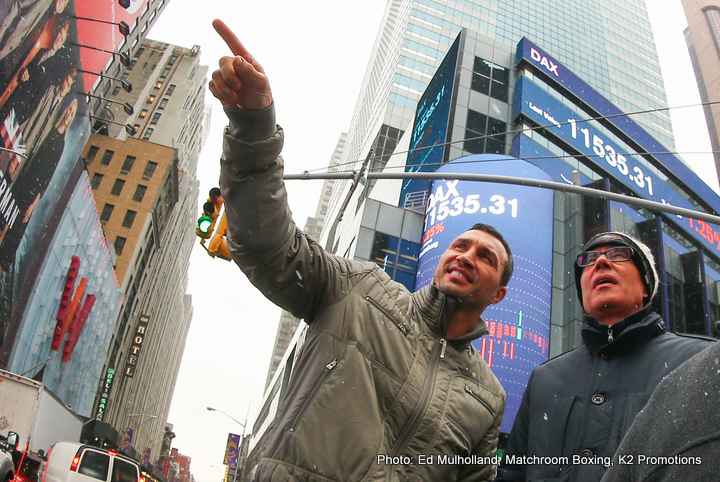 Vitali Klitschko, brother of course of Wladimir, is convinced his sibling will emerge victorious in his fast approaching April 29 clash with unbeaten star Anthony Joshua. Vitali – a great fighter in his own right, now heavily involved in politics in his native Ukraine – took some time out to speak with Sky Sports about the upcoming IBF/WBA title fight that will play out in front of a record breaking 90,000 crowd.

Vitali says his brother’s focus is truly concentrated and that Wladimir will win due to his enormous edge in experience.

“Many people think muscles are important in boxing,” Vitali stated. “It’s not. Everything is here, in the head. He’s much more focused now than many years ago. I hope he knows from his focus, from his concentration, that this fight depends a lot and that’s why everyone expects a great fight. Yes of course we expect a good performance from Wladimir and yes of course Wladimir has to be the winner on April 29. Wladimir has already [got] big experience of fighting in an arena. He’s used to fighting in a stadium, pressure from the crowd, from attention. It will be something new for Joshua and nothing special for Wladimir.”

Wholly encouraging words from Vitali, as would of course be expected, but will Wladimir have to put on a special performance to dethrone AJ? Joshua is reportedly punching wickedly hard in camp right now (even breaking certain gym machinery!) and the much younger man is being groomed for true international stardom and dominance. How much has Klitschko, now aged 41 and winless since April of 2015, got left? Can the former king come back in style from his humbling decision loss to Tyson Fury?

A 50/50 fight in the opinion of many top experts, Joshua-Klitschko is arguably the most eagerly anticipated and exciting heavyweight title fight since Lennox Lewis-Mike Tyson. Who wins? Vitali thinks he knows.

Will we see a great boxing comeback next month, or the ongoing emergence of a new superstar?