Vergil Ortiz Jr (18-0, 18 KOs) survived a shaky start to come back strong to knock out Egidijus ‘Mean Machine’ Kavaliauskas (22-2-1, 18 KOs) in the eighth round on Saturday night in their headliner on DAZN at The Ford Center at The Star in Frisco, Texas.

In the eighth, Ortiz Jr, 23, hurt Kavaliauskas with a stabbing left jab that caught him in the midsection while he was backed up against the ropes. When he got back to his feet, one could tell that he wasn’t going to be able to take any more body shots because he looked winded. 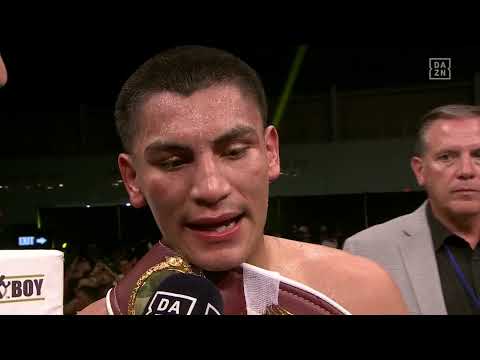 Vergil then pounced on the hurt ‘Mean Machine’ Kavaliauskas, hitting him with shots to the body and the head, and hurting him with everything he threw.

Kavaliauskas then went down for the second time in the round from a headshot. He stayed down longer for this knockdown than he had in the first one in the round.

When the action resumed, Vergil went after him and quickly put him down for the third and final time in the round.

The referee Lawrence Cole saw that this pattern would have continued had he allowed the fight to carry on, and it was obvious that the fight needed to be stopped. That’s when he pulled the plug on the fight to end the masscre.

Early on, things looked bad for Ortiz Jr after ‘Mean Machine’ Kavaliauskas caught him with a tremendous left uppercut in the second round.

The shot rocked Ortiz Jr from his boots, sending him retreating backward while being hit by a storm of vicious power shots from Kavaliauskas, who was intent on ending things.

In the third, Ortiz Jr looked like he wanted vengeance, as he went after the 33-year-old Kavaliauskas, hitting him with shots that had knockout written all over them.

Near the end of the round, Vergil Jr hit Kavaliauskas with a right followed by a stiff jab that sent him down for the first time in the round. The punch was thrown so fast that Kavaliauskas never saw it coming, so it bowled him over.

Of course, Crawford still has to get by Shawn Porter next in their WBO-ordered fight in October. But if Crawford wins that fight, him and Vergil can meet up in early 2022.