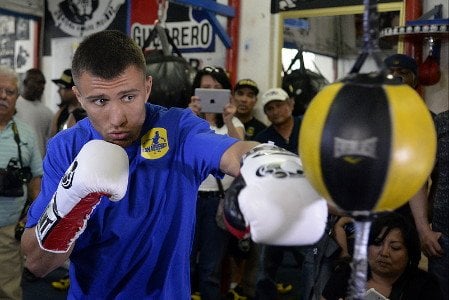 (Picture credit: Hogan Photos) The championship fight will take place on Saturday night at the Stub Hub Center in Carson, California (Showtime) and this will be Lomachenko’s second attempt at this trophy. He dropped a highly controversial decision last time out to the overweight veteran Orlando Salido who lost the title on the scales but was somehow fouled his way to an SD.

Garry Russel Jr. and Lomachenko are both slick southpaws who boxed all their lives. Both are trained by their fathers and both train in their fathers’ gyms. They bring a lot of boxing experience and expertise and the bout should be a feast for casual fans and pundits alike. Southpaws are awkward for everyone including for each other because the fight another southpaw as rarely as anyone and they are fine-tuned to fight orthodox opponents.

These two are technical and fast and would have generally avoided each other at this stage being managed by rival promoters – Top Rank and Golden Boy. This is a rare occasion of competing companies coming together to make what seems like a great match.

Garry Russell Jr. has three brothers called Garry as well, they are all National Golden Gloves champions and they are all named after their father and coach Garry Russell Sr. This particular Garry who will fight Lomachenko has been climbing rings since he was 5 years old and he was praised by the legend Sugar Ray Leonard who modestly compared Garry’s talent to his own. I think Leonard was far too kind but Garry is a special talent indeed. He is undefeated and this will be his 25th professional bout which makes him far more experienced than Lomachenko who has fought twice and lost once in the paid ranks.

Lomachenko’s skill set, conditioning and determination are beyond any doubt. He must have realized his two Olympic gold medals provide no immunity against the dark side of the pro game. He has no room for error any more and he will face a serious challenge. He will be his opponent’s toughest test so far as well. Vasyl Lomachenko is probably being rushed too soon and pushed too far but that’s the only way he wanted it, he even demanded a title fight on his debut. He is capable of becoming the champion; his one “loss” to Salido trumps Garry Russel’s 24 wins against whomever just as Olympic gold trumps Golden Gloves titles.