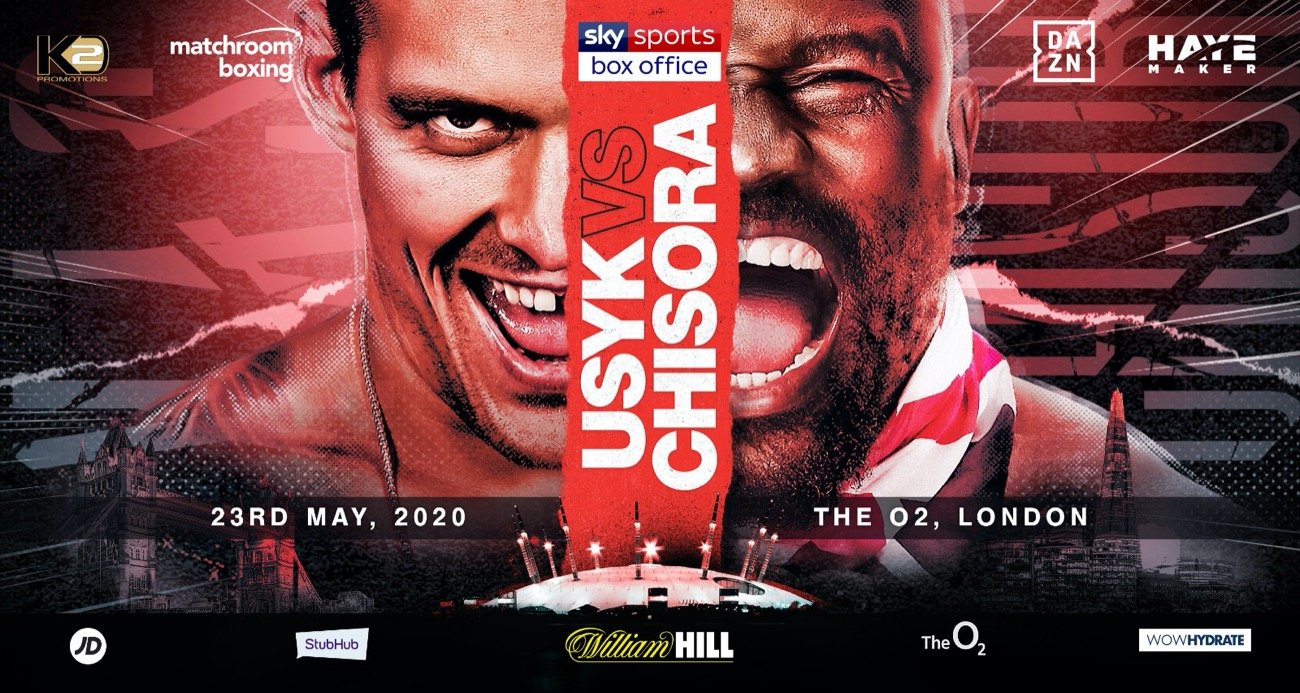 Oleksandr Usyk (17-0, 13 KOs) will be putting his WBO heavyweight mandatory spot at huge risk in two months from now on May 23 against Dereck Chisora (32-9, 23 KOs) on Sky Sports Box Office at the O2 Arena in London, England. While Usyk is supposed to win this fight, you can’t rule out a victory for the 36-year-old Chisora.

This fight can go a number of different ways:

If Usyk loses this fight, a lot of money will go down the drain for Matchroom. A fight between him and IBF/WBA/WBO heavyweight champion Anthony Joshua and the 2012 Olympic gold medalist Usyk is one that will interest a lot of Brtish boxing fans, and bring in huge money on pay-per-view.

Usyk’s options if he loses to Joshua

Eddie Hearn of Matchroom Boxing had Joshua-Usyk fight in mind when he first signed the Ukrainian Usky to his promotional company. And now that Hearn is about to realize his dream, it could go up in smoke with Chisora pulling off an upset.

A fight between Joshua and Chisora won’t do nearly as well on the domestic and international scene as a Joshua-Usyk fight. Chisora has too many losses for the worldwide boxing public to get excited bout seeing him and Joshua fight. That’s why it’s important that Usyk wins the fight because the only acceptable fight is him and Joshua.

The only obstacles that stand in the way of the Joshua-Usyk fight from taking place are the 36-year-old former heavyweight title challenger Chisora and Kubrat Pulev. Both guys are big undercards in their respective fights. Pulev (28-1, 14 KOs) is the IBF mandatory for Joshua, and he’ll be facing him on June 20 on Sky Box Office at the Tottenham Spurs Arena in London, England.

Read:  Joshua sparring partner: 'Usyk fights more like an amateur than a pro... expect a smart fight, not a war'

“As a cruiserweight, I reached the highest heights as undisputed champion and now I am following the same path as a heavyweight,” said Usyk.

It would be a real surprise if Usyk defeats Chisora, and then beats Joshua to become the new IBF, WBA and WBO heavyweight champion of the world. What would be a bigger shock is if Usyk then turns around and defeats the winner of the Tyon Fury vs. Deontay Wilder trilogy fight to become the undisputed champion.

“WAR is coming,” said Chisora. “Usyk reckons he can step up and survive with the big boys. He may be the undisputed cruiserweight champion of the world but on May 23rd he will find out what it feels like to be hit by a real heavyweight,” said Chisora.

The power that Chisora has going for him is going to be a problem. 38-year-old Chazz Witherspoon showed that he could land big glacially slow shots on Usyk, and find brief moments of success.

The added weight that Usyk has put on since moving up to heavyweight has made him slow, and easy to hit. That’s potentially bad news for Usyk if he can’t get out of the way of Chisora’s big power shots on May 23. The last thing he needs is to get hit by him on a consistent basis. Usyk was a good cruiserweight, but he looked pedestrian in his hardest fights in the division against Mairis Briedis and Tony Bellew.