We got a truly sensational fight last night in Las Vegas, as female warriors Mikaela Mayer and Maiva Hamadouche slugged it out for ten thrilling rounds in their WBO/IBF junior lightweight unification bout. It was truly breath-taking stuff, with Bob Arum being moved to say how last night’s fight was “one of the best fights of the year, male or female.” Arum is not wrong, but unfortunately, the official scoring was pretty much all wrong.

After ten sizzling sessions, Colorado’s Mayer, 16-0(5) got the win, the deserved win. But the scoring was terribly one-sided, with one judge giving Mayer everything at 100-90, and the other two officials also being off the mark in handing Mayer the win via 99-91 and 98-92 scores. Hamadouche, who gave her all last night and deserved much better from the judges sat in the privileged position that is ringside, falls to 22-2(18). 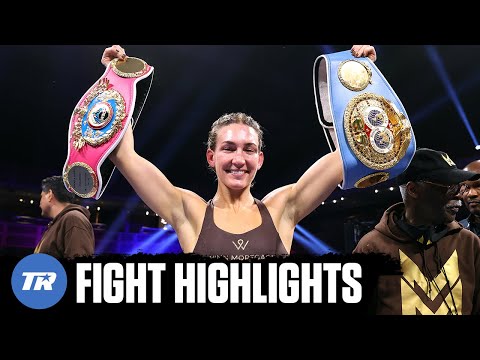 It was a great fight last night, yet Mayer-Hamadouche is the latest great fight that has been spoiled by crazy, unfathomable scoring. Imagine if you were Hamadouche and how you would be feeling right now. The courageous fighter from France was given practically nothing from the judges, despite the fact that she laid it all on the line. “Do these judges fill in their score-cards before the fight?” one enraged fight fan was implored to ask on social media. When we get a shut-out when one is in no way warranted, this question is one plenty of us are tempted to ask.

Unfortunately, there seems to be no end to bad scoring in the sport of boxing, this is just the way it is. No one can come up with a solution to the problem, therefore we will have to continue hearing how the scoring of a fight is “subjective.” But tell that to a great fighter who puts in the kind of gutsy effort Hamadouche put in last night and it’s zero consolation.

Congratulations go to both Mayer and Hamadouche. While nothing but criticism goes to the work of the three scoring officials.