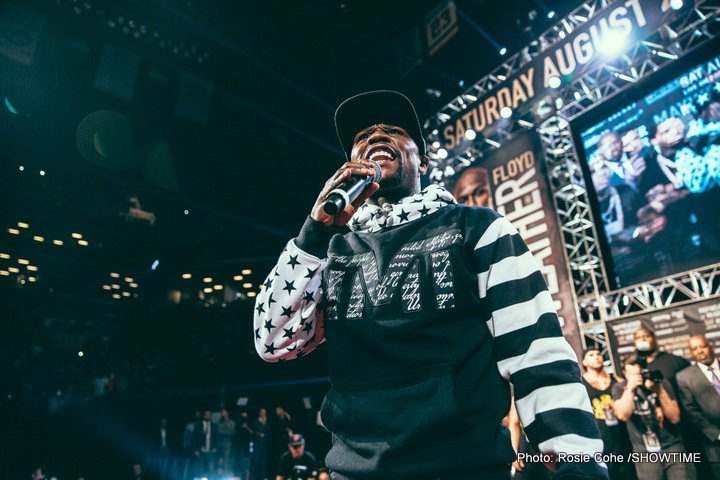 We are just one month away from the monstrously hyped Floyd Mayweather-Conor McGregor “Super Fight,” yet here in the UK there is still no confirmation regarding just who will televise the August showdown.

According to Eddie Hearn, who spoke with both IFL TV and Business Insider, the following have put in their respective undisclosed bids for the rights: Sky, Box Nation, ITV, BT Sport.

Hearn, when speaking about what the price tag may be, told IFL TV that Mayweather himself “wants it to be £100.” There seems to be no way UK fight fans would accept such a lofty payment fee, however. Hearn himself – who of course wants Sky to win the rights to Mayweather-McGregor as he has an exclusive deal with the cable giant – said that his “gut feeling” is that the price, should Sky get the rights, will be £19.95.

Sky Box Office boxing events normally go for £16.95, but the “Fight of The Century,” between Mayweather and Manny Pacquiao (which was snapped up by Sky) was priced at £19.95. Hearn said that if Sky get the upcoming mega-bout, sales can be expected to be up there with, or even over, the 1 million pay-per-view buys Mayweather-Pacquiao pulled in here in the UK.

And whoever bags the UK TV rights, this fight is absolutely guaranteed to generate a boatload of money. In the US, some boxing people suggest the pay-per-view record, currently held by Mayweather-Pacquiao, at 4.4 million buys, could even be broken.

Still, that $100 price tag (if you want the fight in high definition) may well turn off some US fans.