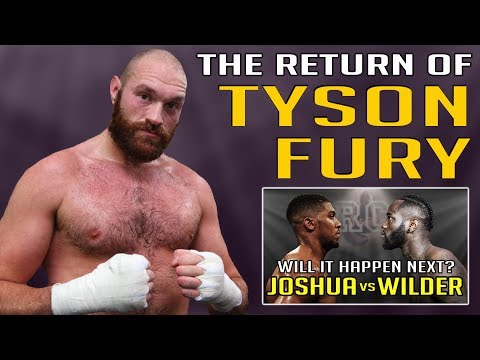 Deontay Wilder (40-0, 39 KOS) is the reigning WBC heavyweight world champion. He won his title against Bermane Stiverne back in January 2015, and has since defended his title seven times. In his most recent victory he overcame adversity against the highly regarded Luis Ortiz early last month.

Anthony Joshua (21-0, 20 KOs) is the reigning unified WBA/IBF/WBO heavyweight world champion. He won the IBF strap from Charles Martin in April 2016. In April 2017 he added the vacant WBA strap when he stopped Wladimir Klitschko. And just last month, he also added the WBO version of the title to his collection when he defeated Joseph Parker.

But the man who still holds a claim to the lineal heavyweight championship is Tyson Fury (25-0, 18 KOs). He defeated the man who had been a long reigning dominant champion, a man who hardly lost any rounds over the course of an entire decade – Wladimir Klitschko. That was back in November 2015, and Fury hasn’t fought since.

Fury finally announced his official return to the squared circle, and the big date is June 9, just a few short months away. With excitement already running rampant in the division with the possibility of Joshua vs Wilder this year, Tyson Fury making his return is a welcome addition to an already interesting heavyweight landscape.

This edition of Rummy’s Corner discusses the return of Tyson Fury, the possibility of Anthony Joshua vs Deontay Wilder happening next, and we also touch on the theme of a fight that is coming on it’s three year anniversary – Floyd Mayweather Jr vs Manny Pacquiao. Please watch and enjoy the video for one man’s take on the current heavyweight scene.