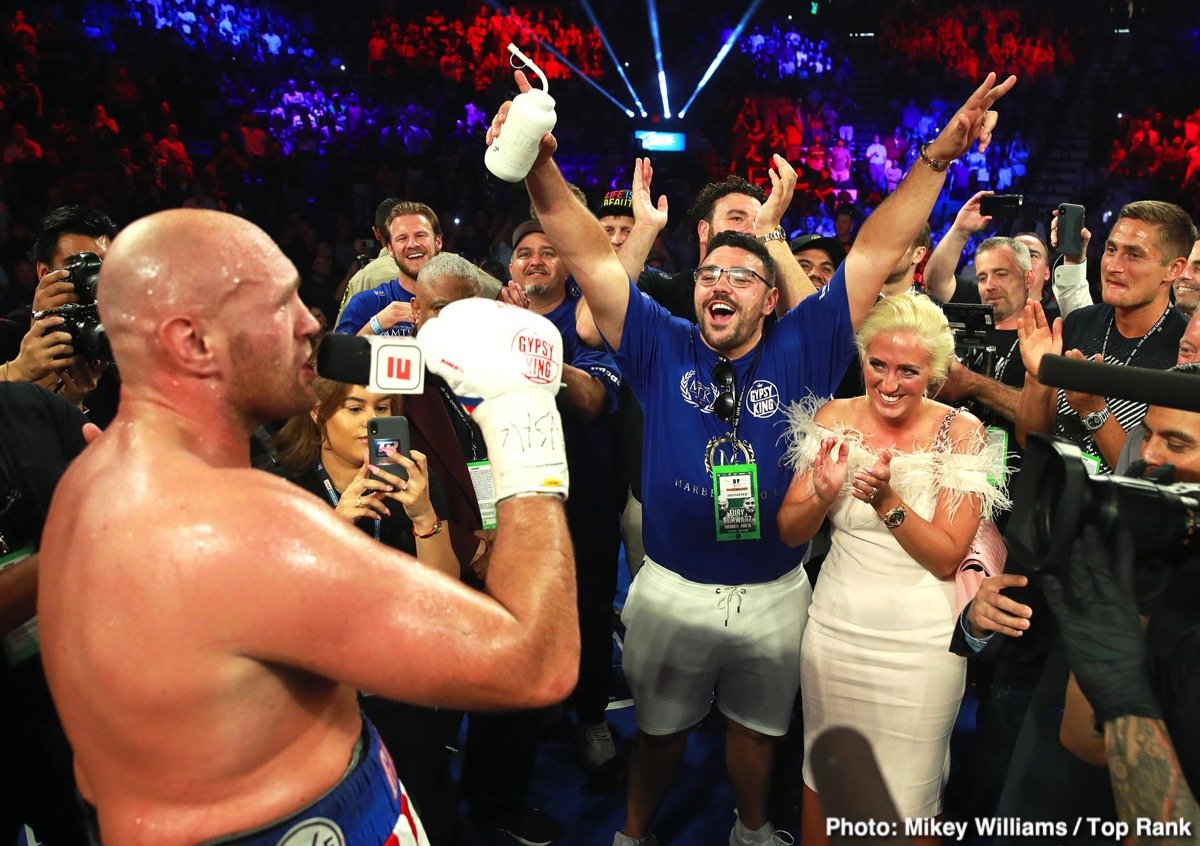 Tyson Fury did his job in beating Tom Schwarz by a second round knockout last Saturday night in a showcase fight for Top Rank at the MGM Grand Garden Arena in Las Vegas, Nevada. Fury (28-0-1, 20 KOs) impressed the casual boxing fans, who came out in high numbers after seeing all the advertisements for the fight on ESPN.

Fury’s next contest is targeted for October 5 at Madison Square Garden in New York.

Fury’s co-promoter Bob Arum of Top Rank Boxing hasn’t given out any names yet, but Kubrat Pulev is said to be one of the candidates for the fight. The 38-year-old Pulev (27-1, 14 KOs) is highly ranked at #1 with the IBF, and he’s currently the IBF mandatory for heavyweight champion Andy Ruiz Jr., who will be facing Anthony Joshua in a rematch in the fall.

If Top Rank wants the 6’4 1/2″ Pulev to face Fury, they’re likely going to need to offer him a lot of money, because he’s in a better situation if he waits to face the winner of the Joshua vs. Ruiz rematch.

If Joshua wins that fight, then Pulev can make life-changing money in a fight with him. Considering the small purse that Schwarz was said to have gotten for the Fury fight last weekend, it’s not worth it for Pulev to agree to that. The problem Top Rank has is Fury isn’t a pay-per-view fighter in the United States. If Top Rank attempts to put Fury vs. Pulev on ESPN PPV, it likely won’t do every well. That might be the only way the match can happen though. This will be interesting to see if Pulev choose to face Fury rather than sit tight and wait for the smoke to clear from the Joshua vs. Ruiz Jr. rematch. Pulev will make big money fighting Joshua. The money Pulev makes fighting Fury might be peanuts in comparison.

Here’s what Chris Mannix of Sports Illustrated said about Fury’s next fight:

“Kubrat Pulev is a candidate to face Tyson Fury in the fall, per source, as Top Rank continues to build Fury towards Wilder rematch. Pulev, TR waiting to see what the IBF will do regarding the Ruiz-Joshua rematch. Pulev is IBF mandatory.”

If the IBF chooses to order Ruiz Jr. to defend against Pulev next, then Andy will need to make a decision whether to keep the belt and defend against him or vacate the title in order to honor his rematch clause for his fight with Joshua. It’s a no brainer. Ruiz Jr. will vacate the IBF belt, and face Joshua in a huge money fight in the fall. Of course, if the IBF makes that move, they’ll be shooting themselves in the foot, because they’ll wind up with a less popular champion.

Pulev isn’t well known in the U.S. A lot of boxing fans know of Pulev for him kissing a female reporter recently after his win over Bogdan Dinu last March. However, the IBF might not care that they’ll wind up with a less popular champion. They might pull the trigger on that scenario anyway. If they do that, then Pulev will likely face the much smaller Agit Kabayel for the vacant IBF title. The IBF might as well give Pulev their belt because he’ll surely win it by beating Kabayel

Fury says he was stronger for Schwarz fight than for Wilder

“I felt like this was my coming out party,” said Fury. “You saw me fight in December of last year. I had to lose 147 pounds for that fight, so I wasn’t at my strongest. Maybe I shouldn’t have taken that fight as soon as I did but I did anyway. This time I had enough training time, I was strong, I was fit, I was ready to put on a show.”

There didn’t seem to be much difference in Fury’s power for the Schwarz fight compared to when he fought Wilder last December. Fury just looked a little fatter, and slower for the Schwarz fight. The power was the same. It’s all in Fury’s head with him continually saying he wasn’t at 100% for any given fight. This illusive 100% for Fury is always just around the corner, and it’s kind of disappointing that he can’t admit that he lacks the discipline to take the weight off.

If Fury had fought a good opponent last Saturday, he probably would have struggled, and looked bad. In that case, he’d blame it on his weight loss, and say he wasn’t 100%. At some point, Fury just needs to admit that he tried his best, and that’s all he was capable of doing.

“I’m ambidextrous,” said Fury in talking about him switching to southpaw during the Schwarz fight. “I can punch with the left as well as the right and I wanted to show a few things to the American public to introduce myself.”