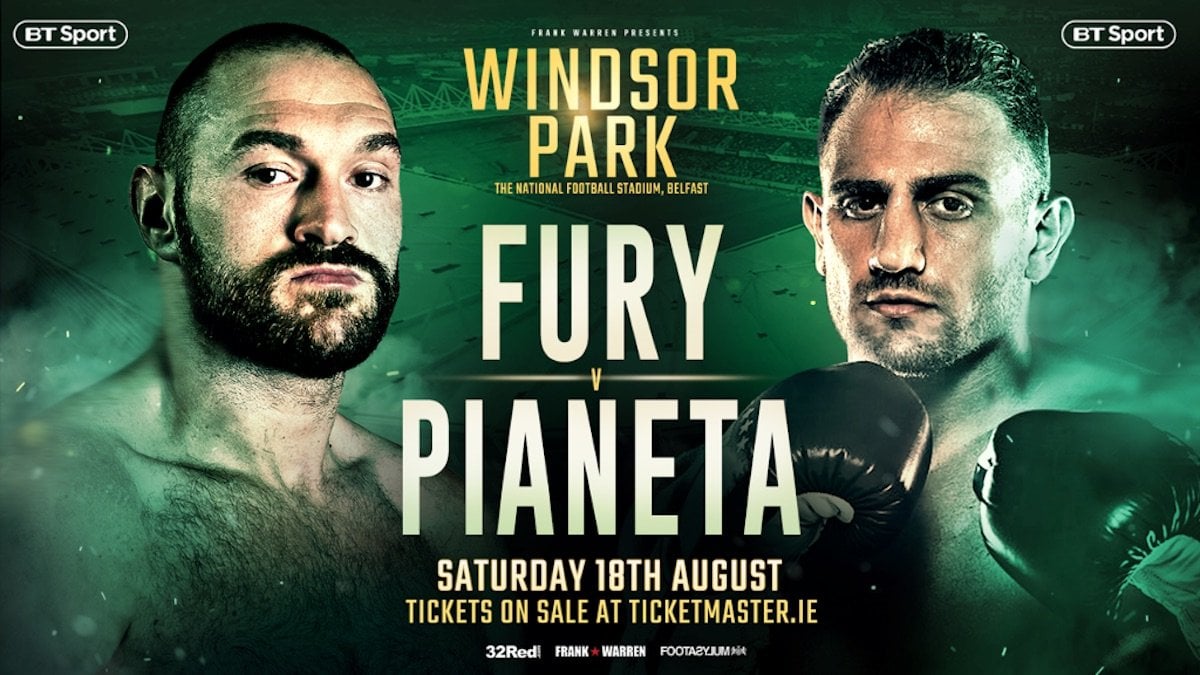 The lineal heavyweight champion will face the 6ft 5in Italian on Frank Warren’s blockbuster open air show at Belfast’s Windsor Park on Saturday August 18, which is live on BT Sport.

Fury, 29, ended a lay off of more than two and half years last month when Sefer Seferi retired on his stool after four rounds and southpaw Pianeta is a step up in class for the Manchester man.

German based Pianeta (35-4-1) has 21 knockout wins on his record, but fell short in world championship challenges against Wladimir Klitschko and Ruslan Chagaev.

Warren said: “The Seferi fight is history and Pianeta is a far better operator than him. His level of opposition tells you that.

“Tyson had been out of boxing for a long time and Pianeta is a good opponent for what is Tyson’s second fight back after his break.

“Tyson had a short rest after Seferi, but is back in full time camp ready for this challenge in Belfast.

“He needs rounds under his belt before moving on to the next level and this fight will do that and make him work for his win.”

Pianeta, 33, is a former WBO European and EBU EU champion and knows beating Fury will put him in line for another world title fight.

Hall of Fame promoter Warren added: “I am sure Pianeta will get into the Belfast ring desperate to upset Tyson.”

Fury (26-0) became the world’s premier heavyweight and Ring Magazine champion when he took the IBF, WBA and WBO belts from Wladimir Klitschko in November 2015 – becoming the first man to defeat the Ukrainian great in more than 11 years.

Fury (26-0-KO19) returned from two-and-a-half years out of the ring with a dominant stoppage of Sefer Seferi in Manchester on June 9 and will continue his march back towards the top against Pianeta (35-4-1-KO21).

Pianeta, who won the WBC world youth crown before picking up EBU and WBO European titles, has twice challenged for world honours – losing to Wladimir Klitschko in 2013 and to Ruslan Chagaev two years later.