Last night in New York, at the Vasyl Lomachenko-Richard Commey fight, rival heavyweight kings Tyson Fury (WBC) and Oleksandr Usyk (WBA/IBF/WBO) met and went face-to-face. And to the surprise of many of people – Fury included – the two men almost did go face-to-face.

Literally. For some time now, since before his ultimately successful challenge of Anthony Joshua, we’ve been hearing fans say former undisputed cruiserweight champ Usyk is “too small” for the heavyweights.

However, last night, the two men squared up (playfully) and it’s clear this is not a case of David and Goliath. Usyk did not appear to be that much shorter than Fury; he for sure didn’t look dwarfed.

Fury will enjoy height and reach advantages of course, but heavyweights from previous years have battled the greatest disadvantages in this area (see Evander Holyfield and the many bigger men he was able to overcome).

Usyk, with that amazing boxing brain, that speed and skill, that desire and complete lack of fear, might just be the man to give Fury fits if and when they fight. It’s easy to come up with an image in your mind, of Fury the colossus looking down on Usyk, making him look tiny in comparison.

At least it was easy to come up with such an image – not so much now, after seeing the two go (almost) face-to-face yesterday. Again, this fight is a tough one to pick, as well as it being a truly fascinating prospect.

But who will Usyk fight next? Who will Fury fight next? Asked by Fight Hype who he would prefer to fight next, Usyk first replied how “It all depends on how it turns out, it’s not up to me at this point.” 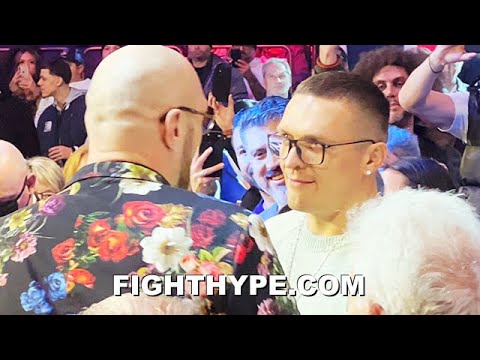 Usyk was referring to Joshua, will he/won’t he take step-aside money issue, which could in theory allow Fury to fight Usyk next (Fury has also been ordered to fight Dillian Whyte, as we know).

But when pressed, Usyk said he would prefer to fight Fury next. “Of course, it’s one step less, I could fight for the undisputed heavyweight title,” he said.

And Fury Vs. Usyk is the fight we all want to see. And in light of how reasonably closely the two men seem to match up physically, this fight is even more intriguing.