WBC heavyweight champion Tyson Fury insists that he will not take it easy on his old friend Derek Chisora this Saturday night when they meet for their trilogy fight on BT Sport Box Office PPV and ESPN+.

The two fighters have shown no hint of animosity whatsoever during the build-up for their third fight, and it’s understood that Fury (32-0-1, 23 KOs) chose to give the 38-year-old faded journeyman Chisora the title shot as a friendly gesture rather than him having earned it.

Chisora is 1-3 in his last four fights and one of the worst title challengers to come along in a long, long time.

This week, Fury has been pretty good about losing his temper when asked in interviews about his rationale for choosing Chisora to defend against instead of a more deserving contender.

Nevertheless, fans are still put off by Fury’s decision to face such a poor opponent to defend his WBC title. The WBC’s decision to give Chisora a top 15 ranking helped Fury make this fight because if he weren’t ranked in the top 15, this match wouldn’t be happening.

“While we’re in the ring, there is no friendship,” said Tyson Fury to Behind The Gloves, making it clear that he won’t take it easy on his old buddy Derek Chisora this Saturday night.

“After the fight, we can have a burger or a glass of beer or whatever. He hasn’t drunk in five years, and I respect that,” Fury continued about Chisora. “We can have a diet coke, he can, and I’ll have a Sprite.

“So we will give it to each other in the ring. Win, lose or draw on Saturday night; you’re going to see a good fight either way. A lot of people say I’m an overwhelming favorite. I’m only a man with a chin, and so is he. I could get knocked out, or he could get knocked out,” said Fury sounding more like a promoter than a fighter.

“One thing I know is he’s going to give a 100%, and so am I. When it comes to fighting, it’s not a business to me. It’s a business, but it’s got to be some sort of fight-warrior element as well,” said Fury sounding annoyed after being asked about his interest in fighting Anthony Joshua. 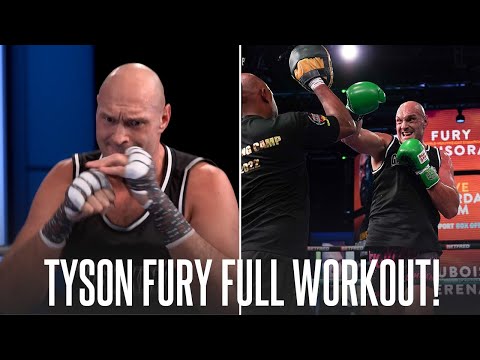 “When you’re dealing with businessmen, who don’t want to fight because of sponsorships or whatever, please don’t come into my arena because I don’t talk about that bull s**t. Let’s fight over there are in the car park.

“One thing I don’t want to do is go back and forth with he said, she said. It’s been five years in the making, and it hasn’t happened. I’ve never been optimistic about it. Just do the fight.

“I’d like to see that fight, but I don’t think AJ has the minerals to take that fight,” said Fury about Joshua vs. Deontay Wilder.

“I just don’t think he’ll fight anyone that will knock him out, and Wilder would definitely knock out Joshua. I’ll have a million quid on it with anybody. One million even money, no problem. Wilder knocks him out cold. Usyk’s a b***ch,” said Fury.