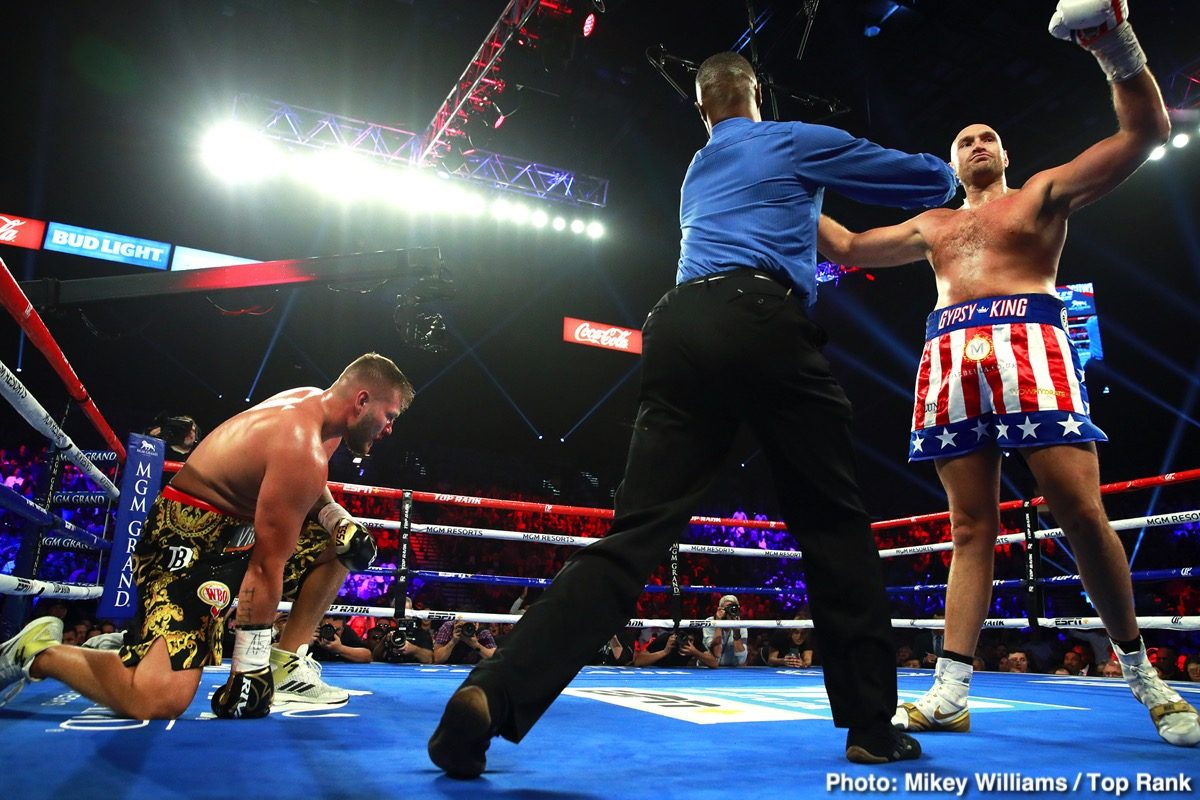 As predicted by many (though not all), Tyson Fury proved to be way too good for little-known German challenger Tom Schwarz. In his Las Vegas debut, the unbeaten lineal heavyweight champ scored a straightforward second-round TKO to improve his record to 28-0-1(20). Schwarz, who was woefully outclassed, lost for the first time in falling to 24-1(16).

Fury, having the first fight in his ESPN deal, promised us all a show and he delivered. Coming into the ring dressed like Apollo Creed, stars and stripes everywhere, the top hat included, Fury then took a leaf out of George Foreman’s book and stood between rounds, neglecting to take a seat. The fight didn’t last long at all but Fury did show off his defensive skills and his speed of hand and foot.

But fans need to see Fury in big fights, testing fights. The plan, as Bob Arum (who has compared Fury and his larger than life personality to Big George) has laid it down, is for Fury to fight again later this year, again in the U.S, before taking that massive (Arum says 2 million PPV buys massive) return fight with Deontay Wilder. Wilder must first come through against Luis Ortiz in another rematch (and ask yourself, who out of Wilder and Fury is taking on the more dangerous and formidable opposition?) but then, hopefully, it will be Fury-Wilder II early next year.

“The lineal champion is back,” a victorious Fury said. “I came here to put on a show for Las Vegas and I hope everyone enjoyed it as much as I did. Bob will tell you we have September 21 or October 5, then next year we are going to hold down Deontay Wilder to give me that green belt.”

We must now wait and see who is picked for Fury’s September/October fight. But don’t go expecting it to be anyone too dangerous. Fury feels he is the best and how he has nothing to prove to anyone. Fans, though, will be split on just who is the best heavyweight on the planet until Fury fights Wilder again, and maybe Andy Ruiz also.

With three, maybe four big men making the claim that they are the best, there really is no time, nor need, for mismatches the kind of which we saw last night.