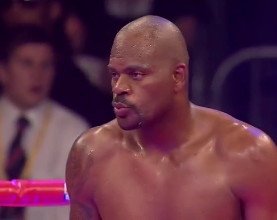 Veteran American heavyweight contender, Tony Thompson (40-5, 27ko), has claimed that he wants a WBC title clash with maligned champion, Deontay Wilder, using the green belt he hopes to win to entice Wladimir Klitschko into a 3rd and final clash.

Thompson fights 35 year old fringe contender, Malik Scott (37-2-1, 13ko) tomorrow on a PBC on Bounce TV card that is bizarrely being billed on fight posters as for the “World Heavyweight Championship” – a slogan that no doubt suggests we’ll be seeing those independent PBC titles established good and proper soon.

Yet Thompson, who has twice fought – and twice come up short against – Wladimir Klitschko, hasn’t lost sight of the ‘real prize,’ and for some reason feels he has a sound master-plan to become the undisputed heavyweight champ of the world at 44 years old.

“My plan is to knockout Deontay Wilder, take his belt, and use it as enticement to fight Klitschko for a third fight,” Thompson told fighthype.com. “I’m still not satisfied with the outcomes [of those 1st two fights, KO/11 TKO/6].

Thompson has boxed just the once this year, beating Odlanier Solis in their 2nd fight in February, five months before it was revealed he tested positive for a diuretic in his July 2013 rematch with David Price in Liverpool. It was a fight that for all intents and purposes ruined the British fighter for good when he was stopped by the wily old veteran for the second time in a row in front of his hometown fans.

The American appealed was banned by the BBBoC for 18 months, although it was only applicable in the UK.

WBC champ Wilder, has yet to announce an opponent for his next outing, although the fellow Al Haymon man had hoped to squeeze in another voluntary defence before he fights mandatory challenger, Alexander Povetkin early next year.