Tony Bellew believes Dillian Whyte can land one of his big shots to KO Tyson Fury in their fight next month on April 23rd.

Bellew says it would be foolish for anyone to overlook Dillian (28-2, 19 KOs) in this fight with the power he possesses, and also with Fury having been dropped twice in his last bout.

WBC heavyweight champion Fury (31-0-1, 22 KOs) is the favorite going into their match next month at Wembley Stadium in London. Dillian will be looking to take Fury’s head off with his left hook all night, and he might succeed in stopping him if he can put him down.

Whyte has the power in his left hook to upset the odds if he can land the shot on the button and put Fury down. Former WBC heavyweight champion Deontay Wilder had Fury down twice last October in their trilogy match in Las Vegas, but he lacked the stamina to finish him.

If Dillian is able to hurt Fury in a similar manner as Wilder did last October, he’s likely to have enough gas in his fuel tank to finish him off.

Poor Wilder, he had nothing left after the fourth round and looked completely exhausted.

To be sure, Fury was there to be knocked out in the fifth round, but Deontay had emptied the tank in the previous round and he never got his second wind.

“Dillian Whyte winning by knockout wouldn’t shock me whatsoever,” Bellew continued. “Dillian Whyte, and I’ve said this before, is a problem for any heavyweight in the world. He’s big, he’s brave, he can punch, and he’s durable,” said Bellew.

The way that Whyte looked in his last fight against Alexander Povetkin, he’s got a great chance of stopping Fury. Whyte looked impressive in that fight, and there aren’t too many heavyweights in the division that could have gone the distance with him that night.

What we don’t know is if Whyte will be able to perform at the same level as he did last time when he gets in with Fury because he was out of this world good that night.

If Whyte makes the mistake of overtraining, Fury will take advantage and bat him around the ring as he did against Deontay.

“He’s big, he’s brave, and Dillian is a problem. His Povetkin hiccup and I’ll say again, is a once-in-a-career punch that Povetkin did.

“He’s down twice, he’s on the verge of being stopped, and closes his eyes and throws a left uppercut hook from hell and it lands. That’s heavyweight boxing. Dillian Whyte can do the exact same thing to Tyson Fury.

“Body shots will be a factor, even though Dillian Whyte is a better body puncher than Tyson Fury, Tyson Fury’s inside work is really impressive and really good.

Fury’s movement will be a problem

“Ultimately, questions are going to be asked if him [Fury]. He’s going to have to get up off the floor again. I’m pretty sure of that. Can Dillian Whyte keep Tyson Fury on the floor? I’m not so sure.

“Will Dillian Whyte tire? That’s what I’m worried about. There’s so much on it going into this fight. I think the silence from him is brilliant, I think it’s a masterstroke because all the questions and all the problems are being thrown at Tyson Fury.

“It’s not his fault. What’s going to happen on the night is going to be an exciting and a brilliant fight to watch. It will not be easy, it will not be one-sided. I don’t care who’s saying it is. You’re wrong.

“This will not be a one-sided beatdown because Dillian is too big too brave and too strong to let that happen. He’s shown that against various heavyweights in the world, big, big dudes.

“Even when he was out of shape, eating everything the MasterChef could offer, he still puts in a valiant performance against Robert Helenius, and Helenius is a big, big lump. So, Dillian is a problem, he really is, and I wouldn’t write off whatsoever.

“Tyson Fury is the clear favorite going in, there are no two ways about it,” said Bellew. 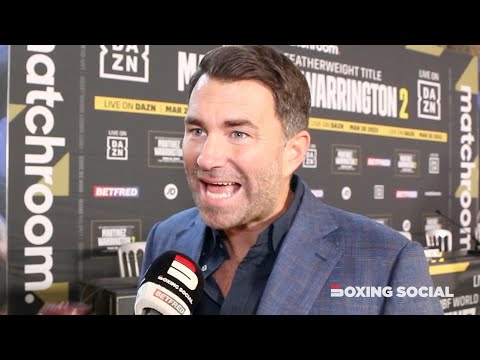