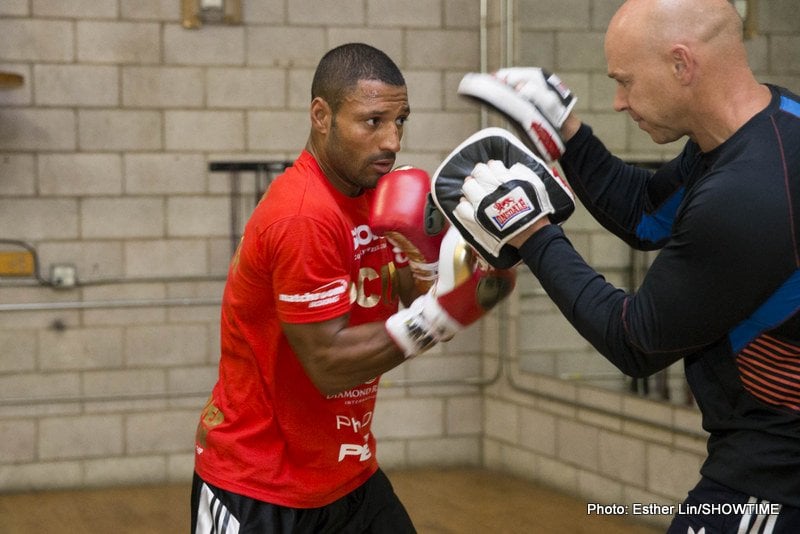 British fighters, even rivals in the sport, often rally around one another when the need arises (see the selfless gestures a number of British fighters made in aid of the recently retired Nick Blackwell; David Haye especially). And this need, in the form of wishing to get behind Kell Brook as he enters his absolutely massive, potentially life and career-changing fight with the feared Gennady Golovkin, has arisen again.

All the British fighters you care to name are now offering their support to the welterweight champ who will be moving up not one, but two weight divisions in a bid to dethrone the powerful middleweight ruler in September. Heck, even Brook’s fiercest rival, Amir Khan – the man Brook openly says he has craved the opportunity of “punching his face in” – is offering words of support to Brook (whether he listens to them or not is another thing altogether). And one man who knows all about being an underdog when entering a big world title opportunity and then smashing the odds on fight night, is newly crowned WBC cruiserweight king Tony Bellew.

Speaking with BBC Sport, Bellew said Brook should receive the same praise for taking on GGG as Khan got for taking on Canelo Alvarez in his own middleweight title fight adventure (at a catch-weight of 155-pounds of course). Bellew also states how Brook, a massive welterweight, will be “an absolute wrecking machine” at 160-pounds.

“A lot of people are scared of Golovkin’s power but Brook’s stepped up and should only be commended,” Bellew said. “Do not write him off. These are two men who can land big punches and it can end at any time but Brook is a serious athlete and deserves massive credit for taking this fight. Everyone showed respect to Khan when he stepped up to face Canelo. Brook should receive the same recognition for taking on the most feared middleweight anyone has seen since Marvin Hagler.”

Is Golovkin worthy of being mentioned alongside the great, the Marvelous, Hagler? In terms of fighting style, GGG and Hagler are totally different (has there ever been any fighter quite like Golovkin, what with his frightening power and his punches launched from unorthodox angles?) – but Golovkin, while not carrying Hagler’s shaven-headed menace, certainly has enough fighters running to the hills for cover. But not Brook. Can Brook beat him?

The Hagler comparison is interesting, and during his career, Marvelous met and defeated three British fighters: Kevin Finnegan (twice), Alan Minter and Tony Sibson. Hagler stopped all three – Finnegan in the 9th and then the 7th-round in non-title fights in the late 1970’s (Hagler later calling Finnegan the toughest man he had ever fought), Minter in the 3rd-round when Hagler absolutely butchered his man and finally became world champ, and the brave Sibson in the 6th-round in his sixth title defence.

Brook might be a more talented boxer/puncher than all three of these Hagler victims, but he is, we can never forget, a welterweight. No-one, including Brook himself, knows how he will react to a natural middleweight’s punching power and physical strength, and in GGG Brook is facing a pure puncher who is talented enough, and already has a sufficient aura about him, to have forced fans to ponder who would have won in a Dream Fight between he and the mighty Hagler.

Will Brook meet a similar fate to Minter, who he was smashed to bits inside three-rounds against Hagler, or will Brook take a prolonged beating against GGG, the way Finnegan and Sibson did against the Brockton southpaw? Or will we see an entirely different fight altogether?

I wonder, will GGG later be calling Brook the toughest man he has ever faced?