Tony Bellew was in total awe of Joe Joyce after witnessing him obliterate Joseph Parker last Saturday in Manchester, England.

Instead, the fight turned out to be a route from the get-go, as Joyce’s pressure, high work rate and powerful shots to the body & head drained the 30-year-old Parker like a battery.

The way that Joyce keeps proving the doubters wrong suggests that he might be the best heavyweight in the division. After Joyce destruction job of Parker, it’s easy to picture him doing the same to Oleksandr Usyk, Tyson Fury, and Anthony Joshua.

“It went exactly as I thought it would go. I thought Joseph Parker would be in the fight early door. But ultimately, Joe Joyce’s durability comes through once again. He outlasts his man, and his talent is there for everyone to see,” said Tony Bellew to talkSPORT Boxing, reflecting on Joe Joyce’s stoppage win over Joseph Parker.

“His durability is on a level that I’ve never seen. He also has the fitness, the dexterity, and the calmness to come through storms. He’s done it against Daniel Dubois, and he’s now done it against Joseph Parker.

“I’m not going to lie, guys. He’s a problem for any heavyweight in the world. The only one that could potentially knock him out is Deontay Wilder or maybe AJ. I’m not even sure Fury can do it.

“If you can’t get rid of him [Joyce], he’s a danger. He throws punches back, and he’s busy himself. He threw 800 punches last Saturday night.

“Six hundred of them are not very damaging. They’re just taps. If you keep knocking on the wall in the end, it’s going to fall down. That’s what Joe Joyce does. He keeps coming and just keeps that work rate going.

“He fights at a pace that most heavyweight don’t do. You can’t keep up with him, and then to add to that, you hit him with everything, and his pace is just continuing. He continues to walk you down, so he’s a problem.

“He’s in your face, and his pace just destroys guys. He’s stopping guys with just a minimum of fights. The fight that we expected him to lose, he didn’t against Dubois. He bullied him, roughed him up and made him quit. That’s because you can’t put a dent in him.

“I’ve never seen him rocked or wobbled. I remember commentating about this guy in the European championship and I labeled him a human Terminator.

“I’ve never seen anyone in my life take what he can take and just keep coming. It’s frightening. If I was fighting him and you nail him with an absolute perfect punch and he just keeps going. 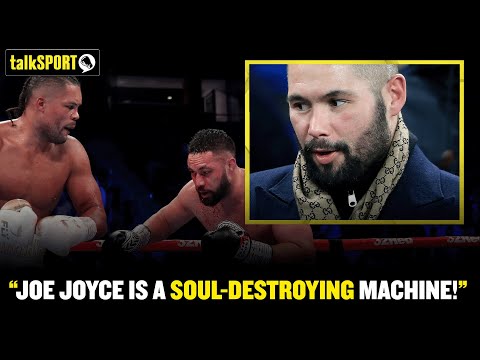