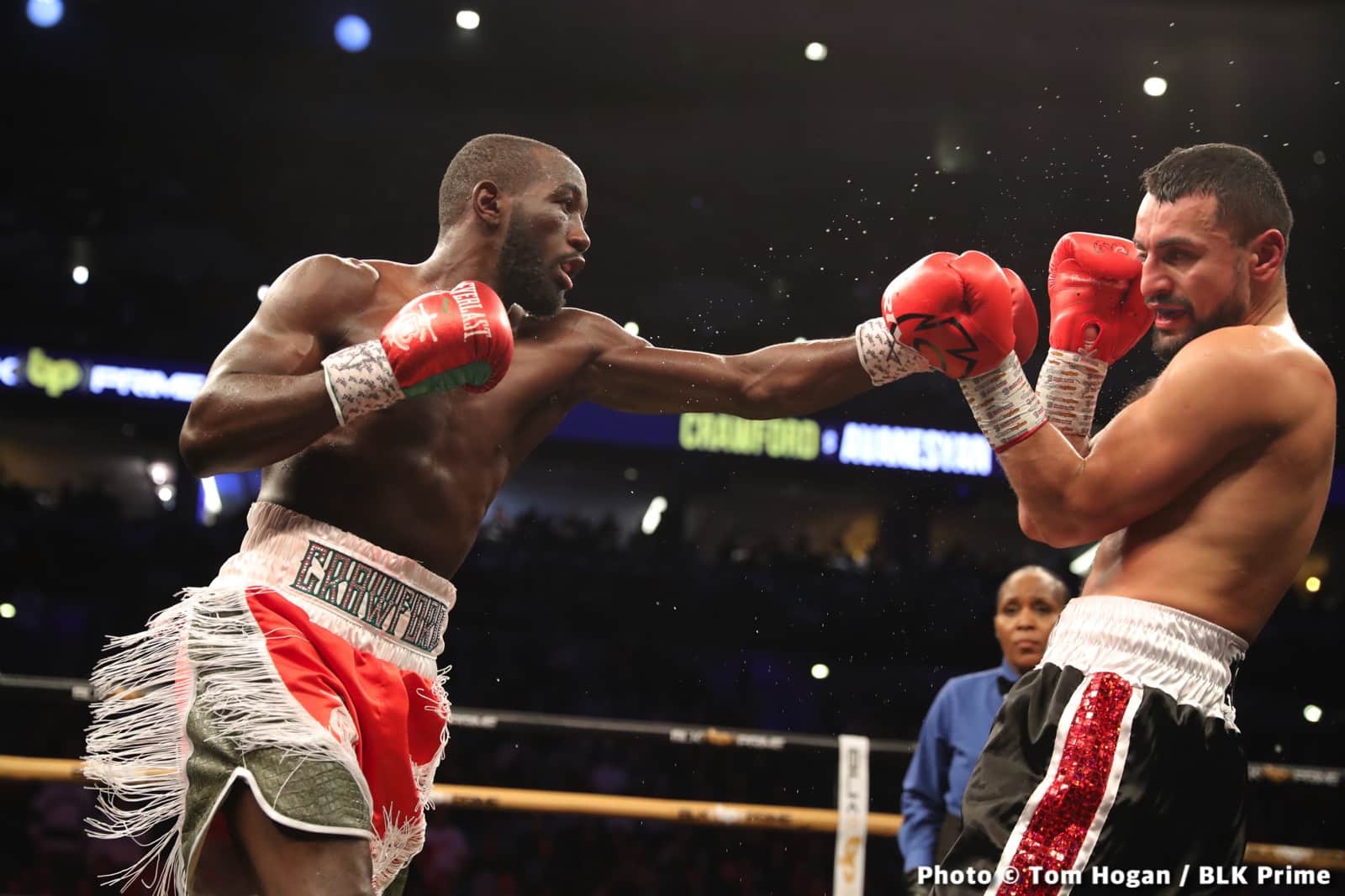 Terence Crawford (39-0, 30 KOs) retained his WBO welterweight title with a 6th round knockout over contender David Avanesyan (29-4-1, 17 KOs) in his debut on BLK Prime PPV at the CHI Health Center in Omaha, Nebraska.

In the sixth round, Crawford landed a scorching left hand that put the 34-year-old Avanesyan down flat on his back on the canvas. The pro-Crawford went wild at seeing their hero pick up his 39th pro win.

To his credit, Avanesyan gave Crawford a good fight until he was knocked out in round six. He was competitive with Crawford, despite lacking the same hand speed and boxing skills.

The shots that Avanesyan did land were crushing punches that gave Crawford something to think about.

In the sixth, Avanesyan made the mistake of being stationary too long, allowing Crawford to load up with a left that split his guard, sending him falling back onto the canvas.

With the win, Crawford will try and negotiate a big-money fight with Errol Spence Jr. That’s Crawford’s best bet for a massive payday.

If he can’t get that fight, boxing fans expect him to defend his WBO strap against Jaron ‘Boots’ Ennis, and that won’t make a lot of money unless BLK Prime wants to pay Crawford a ton of money again.

Female junior middleweight prospect Cris Cyborg (2-0, 1 KOs) showed glimpses of power, beating Gabby Holloway (0-3) by a lopsided four round unanimous decision. The judges scored thee fight 40-35, 40-34, and 39-36. Holloway was down in the fourth after getting caught by a right hand from Cyborg. Preview: According to Bud Crawford, he took the fight with the 34-year-old Avanesyan because he wanted to stay busy. However, #2 WBO Jaron ‘Boots’ Ennis was available and was screaming for a fight.

In an ideal world, that should have been the fighter that Crawford should be fighting tonight, especially with him repeatedly calling himself the #1 welterweight in the division.

If Crawford is really the top 147-pounder in the division, he should be willing to take risky fights against guys that could potentially take his #1 spot.

The combination of Crawford walking out of the Spence talks and opting not to face Boots Ennis in favor of a lesser threat suggest that he lacks the confidence to be the #1 welterweight. It’s one thing for Crawford to call himself the best at 147 and another thing for him to go out and try and prove it.

Avanesyan (29-3-1, 17 KOs) comes into the fight as a sizable underdog, but he still has a decent chance of the 35-year-old Crawford (38-0, 29 KOs) is overlooking him due to his interest in fighting Errol Spence Jr next.

Avanesyan, 34, has never mixed it with anyone at Crawford’s level before, so it will be a massive step up for him. Avanesyan has won his last six fights against lower-level non-contenders.

In the past, Avanesyan has fallen apart in losses to Egidijus Kavaliauskas, Lamont Peterson, and Andrey Klimov. Crawford beat two of those three, easily defeating Klimov by a one-sided 10 round unanimous decision in 2013 and stopping Kavaliauskas in the ninth round in 2019.

If tonight’s fight sells out and brings in a huge amount of PPV buys on BLK Prime, it could spell doom for a Spence-Crawford fight.

If tonight’s event is a huge success on PPV, BLK Prime will likely offer Crawford big money for his next fight, and it might not matter that he faces another fringe contender instead of an interesting foe like Spence or Jaron ‘Boots’ Ennis.

Hopefully, a decent-sized crowd turns up for tonight’s Crawford-Avanesyan card. Goodness knows, the weigh-in was as quiet as a library, and the crowd was sparse.

With all the money Crawford is getting from BLK Prime, that might explain why the undercard lacks exciting fights.

WBO welterweight champion Terence Crawford is in a high-pressure situation tonight, needing a good performance against challenger David Avanesyan to keep himself in the running for bigger fights against PBC stars Jermell Charlo and Errol Spence.

Crawford-Avanesyan fight tonight on BLK Prime PPV in an event that begins at 9:00 p.m. ET/6:00 p.m. PT. Boxing247 will give updates below on the action tonight.