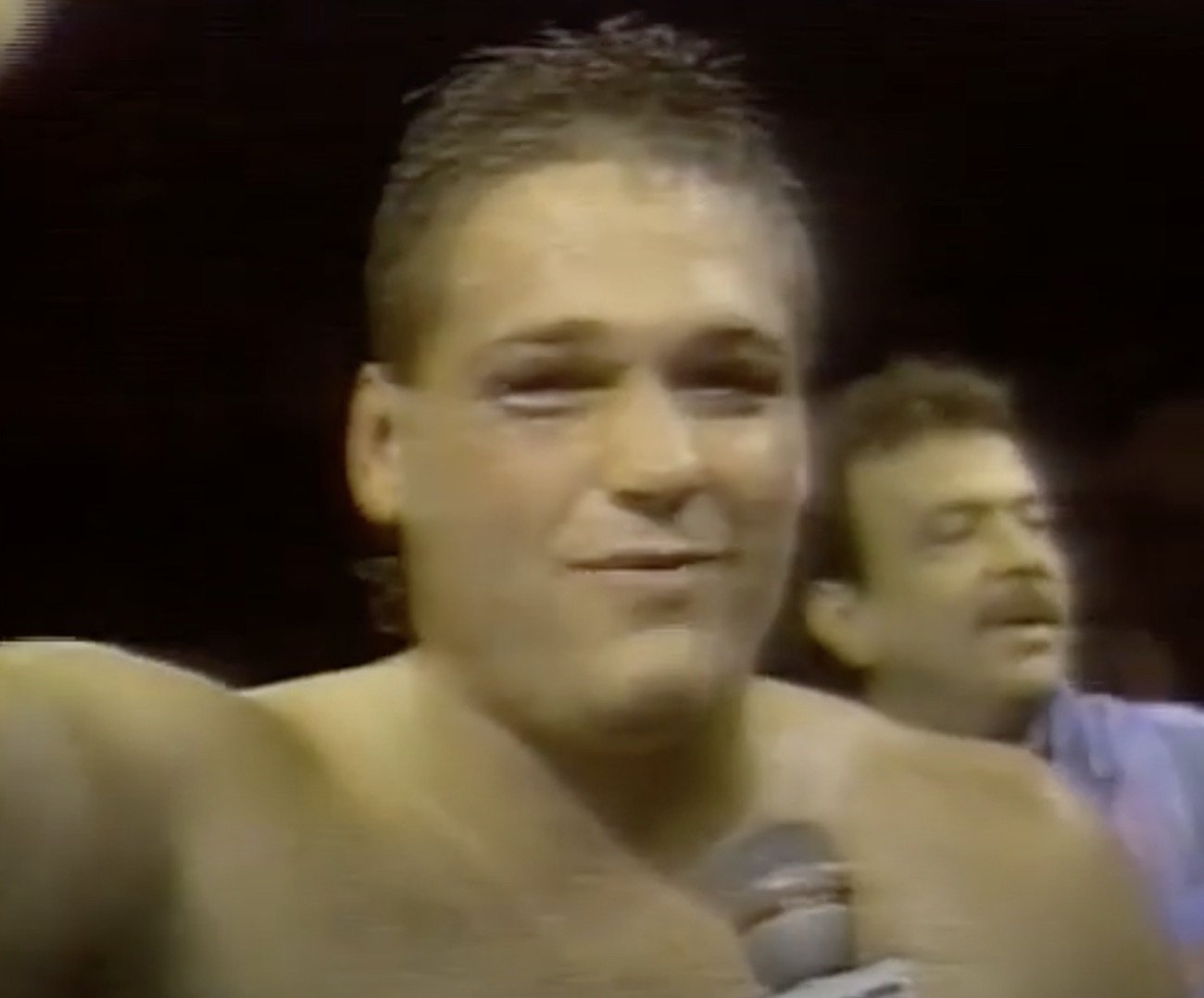 Doughboy Vs. The Duke.

This one belongs in a category all by itself. It was the evening of August 30th in 1993 and heavyweight star Tommy Morrison was getting ready to fight Mike Williams in the first defence of the WBO belt he had won by outpointing living legend George Foreman a little over two months earlier. Sat in the audience, drinking a few beers, was pro heavyweight Tim Tomashek of Wisconsin, a 27 year old who had, five weeks earlier, pounded out a points win over an 0-2 guy named Emory Towles (this being a rematch, Tomashek winning a previous decision over Towles that May).

Out of the blue, the unsuspecting Tomashek was to be elevated from beer-drinking fan to main event fighter. Williams got cold feet, refusing to leave his dressing room. The show had to go on, and as word quickly got round that there was an active heavyweight in the house – one who was limited, not too dangerous but was known for being pretty durable – Morrison had his incredibly short-notice replacement and nobody had to go home having first demanded their money back.

Tomashek, fleshy but game, took the $2,500, he had around 15 minutes to get ready, and then “Doughboy,” a man with a 35-10 record made up mostly of fighting no-names with poor or even losing records (Tomashek also dropping decisions to good names such as Frans Botha, Anaclet Wamba, and Jerry “Wimpy” Halstead; Tim also being stopped by Halstead, Johnny Du Plooy and Seamus McDonagh) was swapping leather with one of the hardest punching heavyweights of the 1990s.

Fight fans have heard of the term “coming off the couch” for a fight, but what Tomashek did was really taking it to another level. The thought of what would have been had Tomashek been badly hurt in the fight is enough to send a shiver down the spine. It was like something out of a far-fetched movie, perhaps a low-budget made-for-TV movie at that. But Tomashek, a real character of the game, sure enjoyed the ride, and then the 15 minutes of fame he got as a result of what happened.

Morrison targetted the head, largely ignoring Tomashek’s invitingly rotund midsection (“If he’d hit me in the guts I’d have vomited on him,” Tomashek said to OnMilwaukee when looking back years after the fight), and soon enough the most unlikely world heavyweight title challenger of recent memory was banged up around the eyes and then on the canvas. Tomashek hung in there until the end of the fourth round, when he was pulled out of the fight/beating.

But for a time, Tomashek enjoyed cult hero stardom, even being a guest on David Letterman’s chat show. “Jeepers” was Tim’s favorite word (Letterman had to tell him, after what seemed like about the twelfth straight uttering of the word, to cut it out!) and the word used to express alarm or concern pretty much sums up how the fans in attendance that night at The Kemper Arena in Kansas must have been feeling.

Tomashek carried in fighting afterwards, eventually going 53-12(18) overall. Tim retired in 1996. Morrison ran into, or was ran over by, Michael Bentt in his next fight after hammering out Tomashek.

One heck of a bizarre chapter in world heavyweight history.