WBO mandatory challenger Tim Tszyu says the “Angry” undisputed junior middleweight champion Jermell Charlo must face him next or give up that title.

After the fight, Jermell didn’t mention whether he would elect to defend against Tszyu next. It’s unclear what Charlo will be doing when it comes to the WBO belt. If he vacates, he’ll be off the hook and won’t need to worry about Tszyu.

Tszyu (21-0, 15 KOs) states that he’s been waiting for two years for his mandated title shot against the WBO champion, and now that Charlo (35-1-1, 19 KOs) is holding the title, he will no longer wait.

“I had it 3-3 going into the sixth, and then Castano started to fade a little bit and gave Charlo the space that he likes, and he needs,” said Tim Tszyu to Fight Hub TV about last Saturday’s undisputed match between Jermell Charlo and Brian Castano.

“In the first six rounds, it was highly competitive. I think it was the pace,” said Tszyu when asked what made Castano slow down after the sixth.

“He [Charlo] just kept coming with the pace, and I thought Charlo looked really tired at one point, but Castano let him off the hook. I think he was tired, and that’s all it takes.

“Charlo is an angry person. He never really smiles,” said Tszyu when asked about his thoughts on Jermell looking so angry during the post-fight press conference.

“I would have thought after the fight that he would have been happy. Just sitting there all cranky, going off on different reporters. It wasn’t only our reporter. I think it was a few reporters.

“That’s how he is. He doesn’t like to be told anything. I agree, but it just got to be the right way,” Tszyu when told that Charlo has trouble with pressure.

“You’ve got to be able to strategically break him down. I’m going to keep at it and bring a pace that he’s never felt before. No, of course not, but you can also be able to take it,” said Tszyu when told that he can’t be hit by Charlo’s bombs.

“I’m mandatory, and I’ve been mandatory for two years,” said Tszyu when asked if he believes he’ll get a title shot against Jermell in 2022.

“The reason why those two blokes Charlo & Castano fought was because I allowed it to. So if he doesn’t want to fight, he has to vacate the [WBO] belt. There are the two options. 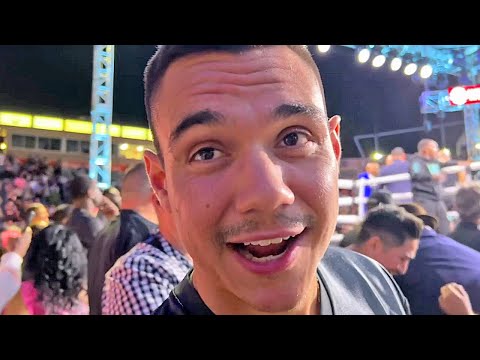