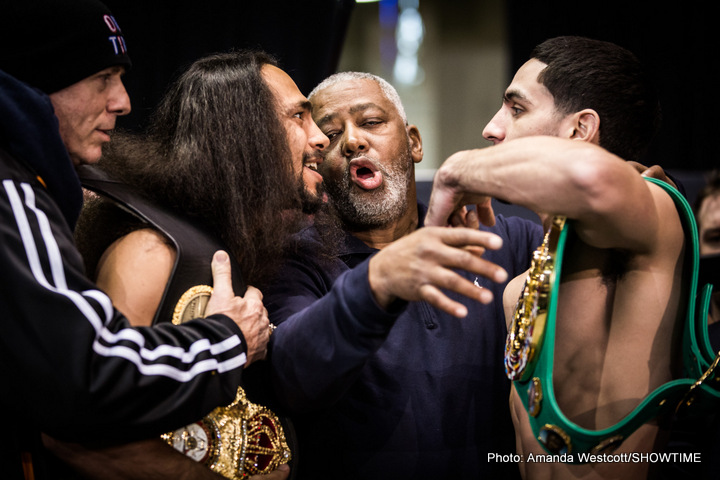 The PBC puts a stamp on 2 years of business with a pair of fighters who’ve attracted the most exposure on terrestrial television. Danny Garcia meets Keith Thurman in a unification bout to start a new chapter at the welterweight division. Once again, Garcia is the underdog in this CBS main event live from Brooklyn, New York at the Barclays Center. Also, rising prospect Erickson Lubin takes on hard-punching Jorge Cota for a WBC Title Eliminator in the co-feature.

Stealing from Jay-Z here, please allow Danny Garcia to reintroduce himself to a real challenge sharing the ring with a true welterweight in Keith Thurman. If it seems like it’s been years since you can remember when Garcia took a risk, it’s because 3 1/2 years have passed from his impressive outing upending Lucas ‘The Machine’ Mathysse.

Danny did take on decent foes, eking out controversial decisions over Mauricio Herrera and Lamont Peterson both at a catchweights. A faded Robert Guerrero is the best opponent for Garcia since making the leap to a full 147. The only reason why Garcia has a WBC belt is due to Floyd Mayweather relinquishing it. The luster of Garcia’s career has worn off and now more than ever he needs to prove his worth and silence the critics.

Keith Thurman may not be knocking dudes out left and right as he once was on the come up but his style seems a perfect fit to foil the Garcia’s. It wasn’t a mistake adding the ‘S’, after all Danny’s father Angel acts as if he’s the one taking punches and not his son.

Thurman possesses the ability to fluster the Philadelphia native with his foot and hand speed. Herrera and Peterson were able to tee-off on Danny, who tried but couldn’t cut the ring off on either man beyond a few moments on the ropes. Herrera is more of a trap-setting counter-puncher ripping right hands that snapped Garcia’s neck.

Peterson implored a more traditional outside game with movement and pot shots, only in spots did Lamont stay in the pocket to bang. The reason why Peterson didn’t get his hand raised, he had too many gaps of inactivity. Not to mention literally taking a walk across the ring with no plans of punching or trap setting, just taking a break. The boo-birds will be Danny’s friend and just like Lamont in April 2015, Thurman’s enemy.

Normally Keith is a busier guy then a Herrera or Peterson, that’s when Lamont chooses to box on outside anyway. A slight uptick in punch rate for Thurman will be needed as long it’s within reason. The moment he lingers by throwing a few extra punches instead of a quick combination, is the time that ‘Swift’ Garcia strikes.

Danny may be slow both hand and foot speed-wise but has damn near elite level timing. His chin and punching power allows him to weather a storm. It may seem that he’s taking too much punishment but there’s a method to Garcia’s madness. The question is, will Keith hang around in the pocket long enough to get caught with one of Danny’s signature left hooks?

That answers lies within the mentally Keith brings to the ring on Saturday night. Does he want to win or make a statement? Obviously those two things can go hand and hand at peak level but they often haunt fighters. If Thurman tries to take the fight to Danny at some point he will touch the canvas or be hurt enough to slow activity. It could be just talk when Thurman continually brings up the fact that Garcia is facing a real 147-pounder. But something tells me Keith will at least make an attempt to knockout or bully Danny.

Naoya Inoue Is “Happy To Be A Monster”

However once the action ensues I assume Thurman will look to stay busy on the outside with his jab and two or three punch combos mixed with stick and move game plan. Garcia won’t be as ineffective as he was versus Peterson because Keith will give him more opportunities.

This scribe is settling in on Thurman being savvy and smart but in an entertaining fashion. For all my gambling degenerates out there don’t be afraid to put some loot down on Danny Garcia if you feel you can back it up smartly. This won’t be a rock’em, sock’em affair but will sustain viewership with just enough two-way action. If Thurman hooks with Danny, a great hooker himself, it could spell trouble. Expect moments of inside exchanges that won’t last long as Keith pulls out of the pocket to reset.

My Official Prediction is Keith Thurman by Majority Decision.

Side Note: David Haye returns to the spotlight against Tony Bellew on Sky Sports Box Office PPV Saturday late afternoon in the states. It’s not about if a KO happens, it’s about when the knockout will come for David Haye.

This fight will be fun while it lasts but Bellew is just not a true heavyweight but to be fair neither is the Hayemaker, who hasn’t had a serious challenge in years.

My Prediction is David Haye by late stoppage.