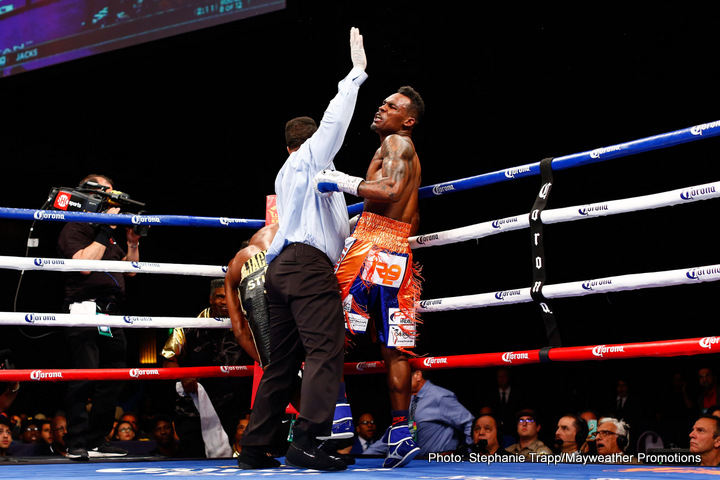 It looked as though he was the one who would be teaching a lesson. He used his slight height and reach advantage, moving quickly side to side, and in and out. When Jermell was trying to reset, Jackson would fire off a pot-shot or two.

As the fight progressed he gained confidence and gambled with multi-punch combinations. Charlo tried to freeze him with a jab and body punches, but it was proving to be a difficult task. Charlo continued to work hard, wanting to close the distance between the two.

In the eighth round, Charlo caught up with Jackson, and bounced a right hand off the left side of Jackson’s head. Jackson reacted as though he was having a problem with his left eye. In the post-fight interview he explained that he was trying to push his mouthpiece all the way back into his mouth. What he failed to realize was the hitch in his getty-up caused by the punch. His knees locked, and then loosened, causing a funny motion.

Charlo recognized Jackson’s vulnerability and jumped in with a long left. It landed smack on target. He fired off another. It too crashed on target. Jackson was on his way out of the ring. Referee Tony Weeks saved the day by jumping in to signal Jackson was done. It was 0:51 seconds of round 8 in a twelve round fight for the vacant WBC World super welterweight title. Jermall desperately wanted to pull off a win to keep the IBF World Super Welterweight title. Then both brothers would hold titles in the same weight class. An impressive feat.

Jermall’s (24-0-0, 18KO) win was much less decisive. He had difficulty dealing with the crafty southpaw Austin “No Doubt” Trout (30-3-0,17KO). But, he did use his slight height and reach advantage well. He stayed strong, with good balance and defense. Trout was having a tough time landing a consistent right jab. Charlo kept up the pressure, countering just about every time Trout threw anything. In the later rounds, Trout seemed to get in a better rhythm, which enabled him to the get off first.

All of a sudden, Trout seemed to take charge. His punches were coming faster, and with more zip, befuddling Charlo a bit. He was determined to make the judges’ job tougher. No longer was Charlo the general. Several of the earlier rounds could be scored either way, but the close ones usually go with the title holder. “The challenger has to take the title.”

Lara was no stranger to bad decisions. Back in 2011, most thought he deserved the nod over Paul “The Punisher” Williams, and two years ago he lost a close decision to Saul “Canelo” Alvarez. Lara felt he deserved the nod in both fights. He wanted to make sure he avenged the “draw” to Vanes “Nightmare” Martirosyan back in 2012-11-10. He wanted everyone to know his right hand was healed, and he was in tip top shape.

In the other corner, Vanes Martirosyan (36-3-1, 21KO) was still carrying more than just a little anger over the draw. He wanted to remove any doubt about who was the better fighter. He promised fans he was going to beat Lara’s body and maybe break a few bones in the process. He planned to hit anything he could. He’s not the first fighter to make such bold promises. Usually they end up being frustrated. You can hear them saying, “I’m going to cut off the ring. I’m going to slow him down with body shots. I won’t let him rest.” Think how often Floyd Mayweather, Jr. heard those or similar words.

It’s a hard plan to fulfill. Lara put on a pretty good display. Even though he is shorter than Vanes, it didn’t matter. His superior reach enabled him to land his right jab and straight left. Then he would quickly moving out of danger. Lara isn’t just a mover. He is a complete fighter. He uses his speed to be first, and he counters well. He depends on his legs to take him out of harms way, and give him angles. He’s a master at avoiding punches and landing good counters.

When tagged, he will come right back with greater speed and steal away anything Vanes was trying to accomplish. Vanes did pound the right side of Lara’s body with left hands, and he would shoot through right hands around the belt line. Apparently referee Vic Drakulich felt too many of Vanes’ punches strayed low. He warned Vanes several times, and then penalized him for one that seemed borderline. The penalty wasn’t needed for Lara’s victory, but it seemed to seal Vanes’ fate. Lara got the UD with (2x) 116-111 and 115-112.

Even though Lara came away with the victory, he seems to suffer from the same affliction as many skilled defensive boxers. They win the fight, but fail to captivate the fans. Fans want excitement. Victories without risk leave fans wanting. If a fight is capable of knocking out the other man, then fans feel it should be done, or at least attempted. Too often skilled fighters such as Lara aren’t willing to take the necessary risk. Regardless, all three fights were fun to watch, and any one of the six fighters involved represents the junior middleweight division well.