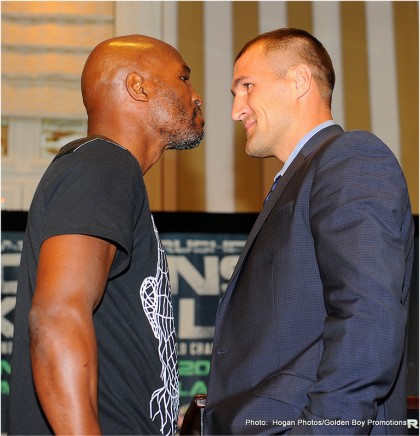 Around the age of 50, there are a few things expected of men. Forgoing jeans and being permanently embedded in trousers? Probably. Switching to un-pasteurised milk? Maybe.

But fighting someone that is 18 years younger and also a legitimate killer? Hardly. Very few men approaching that age fight anything other than male erectile dysfunction. However, very few men are anything like Bernard Hopkins.
And that is why he is doing just that. The oldest boxing champion in history, 49 year old (50 in January) Bernard Hopkins, is fighting one of the scariest men to ever step in a ring, in Russian knockout artist Sergey Kovalev. The two will compete for the title of undisputed light-heavyweight champion of the world on November 8th, in Atlantic City.

Russia vs America, youth vs experience, knockout artist vs defensive master; this fight has it all. At any time, this type of high level bout between two such contrasting fighters would be hugely anticipated, but the twist of fate that has seen the two cross paths at this stage of their careers gives this fight an historic edge that makes it one of the most significant in boxing history. Sure, there is a lack of mainstream hype that only the likes of Floyd Mayweather – with his hip-hop beefs and lady dramas – or Manny Pacquaio – with the attention of a nation behind him – can bring. But for real sports fans, this fight has just as much importance as any fight in recent years.

Bernard Hopkins is currently going under the moniker of ‘The Alien’, as he insists he is out of this world, something which he is proving in the ring. In what has thus far been a 26 year career, Hopkins has broken records and arguably been a top 10 pound-for-pound for the last 15 years. And all this after having lost his very first fight.

Having lost on his debut, Hopkins racked up 22 wins in a row, before facing a young Roy Jones Jr in 1993. Losing via unanimous decision against the best fighter of the 90s, this was the last time Hopkins ever lost a fight clearly. By 1995 Hopkins was a middleweight world champion and remained so for 10 years, defending his belt a record 20 times, beating legends such as Oscar De La Hoya and Felix Trinidad along the way. During this period Hopkins was known as “The Executioner”, due to his efficient but deadly style.

In 2005 Hopkins found himself matched up against undefeated up-and-comer Jermain Taylor and lost two very controversial decisions back-to-back. Aged 40, this could have been the perfect time for Hopkins to retire.

Instead, he decided to move up two weight classes to take on Antonio Tarver, considered the best light-heavyweight in the world at the time, having just beaten Roy Jones Jr at the weight. In a virtuoso display, Hopkins battered Tarver for 12 rounds, earning himself the title of best light-heavyweight in the world.
Hopkins has since stayed at light-heavyweight and continued in the same form. Two scrappy, tight losses to Chad Dawson and Joe Calzaghe lay in between more top level wins on the way to becoming light-heavyweight champion, including a rematch victory against Jones Jr. By beating Canadian Jean Pascal, in Montreal in 2011, Hopkins beat George Foreman’s record to become the oldest boxing champion in history at 46 years old.

Again, this could have been the perfect opportunity to retire. But as he showed by doing press-ups in between rounds during that fight, Hopkins was not ready to retire. Thus, three defences later, after being unable to secure a fight against the likes of David Haye (a heavyweight!) or Floyd Mayweather (whom he was willing to move down three weight classes to fight!), Hopkins did the next best thing by agreeing to fight a man that the only other champion in the division avoided.

Already a legend in boxing and already a wealthy man, Hopkins has no need for this fight, and as such, by even taking the fight against Kovalev, Hopkins has enhanced his legacy. This is not just because Hopkins is soon to be 50 though, as just six months ago he beat another undefeated Eastern European champion. This is because Kovalev may be the most dangerous fighter in the world today.

“Each punch was like being hit by a sledgehammer”, is how former world champion Nathan Cleverly described Kovalev’s power. Cleverly, a Welshman that prides himself on his toughness, was barely able to last four rounds against “The Krusher”. Kovalev followed up that win by devastatingly knocking out Ismail Sillakh in two rounds, in a win that really showed his viciousness. It was not just that he sent Sillakh through the ropes with his punch, it was also that he had to be pulled away by the referee after he did it, as he was screaming at his unconscious Ukrainian opponent due to animosity built up between the two during the run up to the fight. Nevertheless, if somehow the power of a man that has knocked out 92% of his opponents is in doubt, his tragic fight against Roman Simakov can be pointed to.

In his 18th fight Kovalev faced the highly rated Simakov, who sported a 19-1 record at the time. Simakov made it to the 6th round before feeling the effects of Kovalev’s punches. Hitting the canvas after a barrage, Simakov somehow made it to the 7th round before being put down a second time. The fight was stopped by the referee and soon after Simakov collapsed. Falling into a coma, he died three days later.

In 25 fights only two men have managed to hear the final bell and both of those fights came early in his career. Discounting a draw that occurred after Kovalev’s opponent was unable to continue after an accidental blow to the back of the head, the Russian has knocked out 13 men in a row. A former Russian soldier, along with his power, Kovalev’s cold, ruthless manner clearly mark him out as a uniquely brutal and devastating fighter.

Yet, even with all the hype around Kovalev, the odds on the fight are pretty even. Never being one to strictly stay within the rules, it would not be too surprising to see Hopkins attempt to neutralise Kovalev’s power with smothering tactics. However, not only is Hopkins fighting the most powerful man he has ever fought, he is also fighting father time. Having spent five years in jail from 17-23, Hopkins turned to a life of Islam upon leaving prison. This has seen him live a clean life since, which he directly attributes to his amazing fitness. Aged 49, his stamina, strength and reflexes will all need to be of amazing standard to escape succumbing to the power of Kovalev.

Stylistically, although Kovalev does not have the kind of speed that has previously troubled Hopkins in the past, he has the ability to stop anyone at any time, which is a game plan he will stick to. He also will be pressuring Hopkins throughout, making sure he has to work his 49 year old body every minute of the fight. Hopkins will be firstly looking to slow down Kovalev with shots to the hips and ribs, before trying to draw him onto right-hands. Tying him up and working out of a clinch will be Hopkins plan, as he is not nimble enough to be able to win the fight on the back-foot.

In some way though, as much as winning or losing will mean in this fight, the level of performance will mean more. If Hopkins can run Kovalev close, his legacy will not be tarnished. If Kovalev can be the first person to seriously hurt Hopkins, he will still be one of the most feared men in boxing.

Hopkins is a once in a lifetime athlete. Kovalev is a once in a generation monster. It is an alien vs a beast. When the two meet either a myth will be exposed or a legend will fall. A new era may start, or an old tale will continue to ring true. It is a fight for the ages. Come November 8th, Atlantic City will host one of the greatest fights in history.