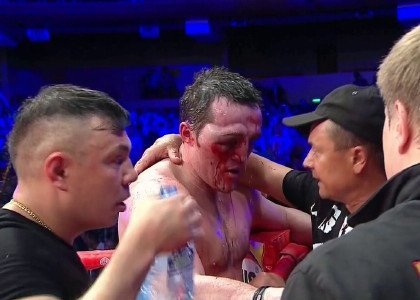 Answer this, fight fans – have you ever, ever seen a more horrific, disturbing and gruesome eye injury – or ANY facial injury – suffered by a fighter who was somehow permitted to carry on fighting? Never before have I seen a more battered and bloodied fighter be allowed to continue. Lebedev, looking far worse than Vitali Klitschko did when he was banged up by Lennox Lewis, and worse than George Foreman looked when Alex Stewart turned him into a grotesque mess back in 1992, was a pitiful sight from the mid-rounds on. Speaking of pitiful, the officials in Moscow – the referee Stanley Christodoulou, the entire Lebedev corner and the ringside doctor especially – performed pitifully in doing what they should have done: protect the fighter.

Lebedev may never be the same again and he may never regain full vision in his right eye, a detached retina would certainly some as no surprise. That this situation was allowed to come to pass is simply intolerable. Yes, both Lebedev and Jones deserve immense credit for showing the sheer heart and guts they did, but yesterday’s cruel battle should have been terminated far sooner than it finally was. The critics of boxing, those who want to ban boxing, will be having a field day over this one.

Let’s all just hope that Lebedev – and Jones, who had his brain rattled in alarming fashion – prove to be okay and able to live a healthy life after what they went through a matter of hours ago. But can anyone really see either guy ever being the same fighter he was pre-May 17th?

Boxers never quit, the great ones anyway, but there is nothing wrong with a corner man, a doctor or a referee making a beaten fighter quit. This was totally forgotten yesterday and an incredibly brave warrior may pay a big price as a result. Boxing, too, may suffer due to what was witnessed in Russia.