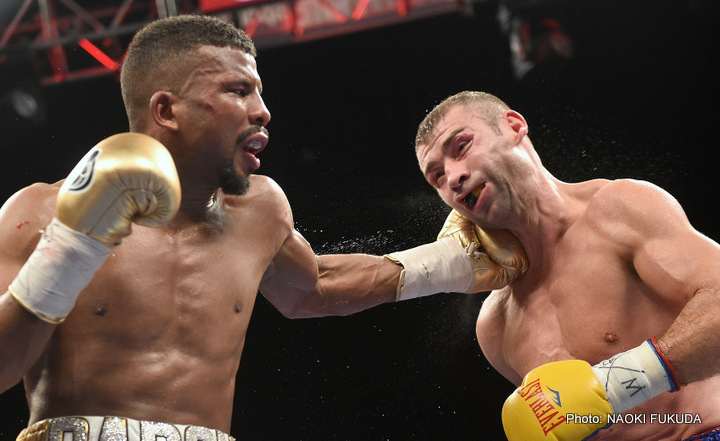 By Boxing’s Devil’s Advocate, Daniel M Webster – Ladies and gentlemen of the jury, today I intend to prove, by a preponderance of the evidence, that the majority draw decision in the Badou Jack vs Lucian Bute fight is a perfectly acceptable outcome. It is true that the decision was initially met with shock, dismay and outrage. After what appeared to be 12 dominating rounds, Badou Jack found himself having to settle for a draw against former champion Lucian Bute. “How could such a thing have happened?”, you might ask yourself. Surely this is a sign of incompetent judging, as Teddy Atlas so often professes; the kind of thing that is killing this great sport of ours. I am sorry to shatter the illusions of conspiracy and corruption, but this was neither the result of unscrupulous promoters, greased palms, or underworld influence. Lucian Bute received a draw in this fight simply because two of the three judges objectively believed he won 6 of the 12 contested rounds.

Many observers felt that Jack was pummeling Bute for much of the fight, and the lopsided SHOStats figures clearly favored Jack. So how could Showtime’s answer to Compubox not accurately represent the story of the fight? While Jack may have landed the more frequent and more telling blows, the real question is did he do so in the majority of the rounds? That is where the subjective nature of boxing scoring rears its ugly head. The fight started cautiously, with Jack off to his usual slow start, and Bute living up to his promise of jumping on Jack from the opening bell. The early rounds didn’t give us much to distinguish between the two fighters. Bute focused on head shots and Jack did some solid body work, which the commentators had no doubt would pay dividends later in the fight (the fact that it didn’t notwithstanding). All those shots underneath, while cleanly landed, lacked the flashy appeal a few well placed head shots would have produced. In the meantime Bute was very busy through the first four rounds, and while he may not have landed the majority of those head punches, he landed enough to persuade noted boxing scribe Dan Rafael to have Bute up 3 rounds to 1 after the forth. That is not to say that ESPN’s boxing guru scored the fight a draw, he saw it as a clear win for Jack. Nonetheless, a case can be made for giving Bute rounds 1, 3 and 4, as Mr Rafael did.

After round 4 it looked like Jack was really taking control of the bout. He mixed up his attack upstairs and downstairs, and presented Bute with angles and a varied offense to the extent that he appeared to sweep rounds 5-9. By the start of round 10 Lucian appeared to be well behind in the fight, taking perhaps 3 rounds while Jack had secured 6, and looked to have all the momentum. But there was a clear shift in the flow of the fight at the start of round 10. Jack slowed down and his punch output dropped precipitously. At the same time Bute started targeting Jack with his vaunted uppercut, and his movement seemed to improve to the point where it was he who was dictating the geography of the contest. Despite all of Jack’s early bodywork, it was Bute who was fresher down the stretch, and looked to be sweeping the championship rounds. The Showtime announcers lamented that we were no longer in the days of 15 round championship fights, for if we were, the surging Bute may well have taken out the fading Jack. Steve Farhood, Showtime’s unofficial scorekeeper (who had given Bute only a single round prior to the start of the tenth) saw Lucian Bute sweeping rounds 10, 11 and 12.

At the end of the fight one judge had Jack dominating the contest 117-111, scoring a scant 3 rounds for Bute. He was overruled by the other two judges who had the contest even at 114 apiece, a majority draw. This viewers, pundits and the fighters themselves were left to wonder how any impartial judge could find 6 rounds to give to Bute. Even the aforementioned Steve Farhood and Dan Rafael couldn’t understand how this verdict could be justified, despite the fact that between the two of them a case could be made for giving Bute rounds 1, 3, 4, 10, 11 and 12, the requisite six rounds required for a 114-114 scorecard.

Admittedly it did look like Jack won the contest. Despite his poor showing in the last quarter of the fight, Jack seemed to be doing real damage to Bute for a large portion of the fight. But much like in the first televised fight of the evening, the overall amount of damage sustained is not the primary scoring criteria for a boxing match. The fight was contested over 12 individual rounds, and a round in which one fighter dominates is generally scored the same as one in which the fighter barely edges their opponent. In addition, the primary scoring criteria is clean effective punches, with the emphasis on the punch’s effect on the opponent. Until we can find an objective way to measure the actual effect of a punch, we are left to use our eyes and ears to subjectivity measure a punch’s impact. Unless a body punch leaves a fighter doubled over, those punches upstairs which push a fighter’s head back will tend to get more love from judges. Jack’s early body work may have wowed Pauly, Al and Mauro, but apparently didn’t have the same effect on two of the three judges (or Lucian Bute for that matter). Much like in DeGale vs Medina, the fighter who is more beaten up at the end of the fight is not necessarily the loser. Just for the record, I did have Medina winning the DeGale fight, but that is another story.

So ladies and gentlemen of the jury, the defense rests. Boxing’s own Devil’s Advocate has made the case for a draw in Jack vs Bute. I will now leave you to your deliberation. Is boxing corrupt, are judges incompetent, is the fix in, or had three impartial judges reached a decision to the best of their ability? Surely boxing phenom turned promoter Floyd Mayweather felt that his fighter Badu Jack was wronged. No surprise of course, Mr Money is hardly impartial in this instance. Speaking of Mayweather the promoter, he seemed far more interested in keeping his name in the limelight, teasing Jim Gray about a possible ring return, than he was in promoting his charge. Perhaps this is just a result of the transition phase between fighter and promoter, but if he intends to be successful in the promotional field then he has to temper his ego and allow the spotlight to fall on someone other than himself. That too is a story for another day. For now, I patiently await your final ruling, and look forward to seeing you on the next edition of Boxing’s Devil’s Advocate.