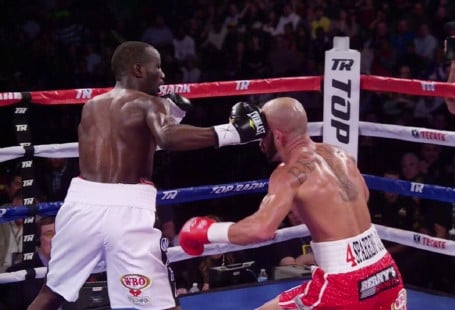 Terence Crawford thrilled the standing room only crowd at the Century Link Center Omaha, Nebraska with his skill and finesse. Once again he managed to display a touch of artistry in the most violent of sports. He always remains calm and poker-faced while he carves and sculpts his subject. Saturday night, after twelve one-sided rounds, the skillful practitioner named Terence “Hunter/Bud” Crawford 25-0-0 (17KO) presented his finished work in the form of a swollen and bruised Raymundo “Sugar” Beltran 29-7-1 (17KO). Everyone was impressed. They liked what they saw.

What’s not to like about this young man. First of all, he seems to have his priorities straight. The first thing he did after winning his fight against Ray Beltran was to give thanks to God. He obviously understands and his grateful for the gifts with which he has been blessed. He also acknowledged he fought his last fight as a lightweight and will be moving up to the 140lb division.

HBO’s Max Kellerman seized on that announcement, and tried to pin down Terence as to whom he would like to fight next. Another noteworthy thing occurred. Terence calmly and softly answered, explaining he doesn’t “call out anyone”. He leaves those things to his manager and promoter. It’s nice to hear a really good fighter act like a gentleman. There was none of the usual bragging, and no feeling of self-importance evident in his demeanor .

The fight itself was exciting. It started slow, with Crawford working from an orthodox stance. He darted side to side, occasionally gliding backwards, out of range. Beltran was the aggressor, but cautious as well. Both men were content to probe and prod, looking for openings and those moves that potentially can be exploited. Beltran knew he had to be the aggressor, but he also understood he needed to be extremely careful, because Crawford was an excellent counterpuncher. As a result, Beltran used a lot of feints and other movements, hoping to get Crawford reveal his plans, or maybe even commit and get himself out of position.

Beltran’s task was a daunting, even discouraging one. First, it was very difficult to get Crawford to make a mistake. Secondly, just when Beltran felt he had Crawford where he wanted him, he would realize he was the one who got suckered, and soon was eating leather. Those times when he got through with a straight right, or left hook, he realized Crawford had tough chin whiskers. He never did get the desired result. In fact, the expression on Crawford’s face wouldn’t change.

When Beltran would land something, he would naturally try to follow up and gain an advantage. Crawford just wouldn’t let him get the upper hand. He would skillfully deliver accurate counter shots that took the play away from Beltran. A look at the face of each fighter attested to that fact. By the end of the twelve round fight, the left side of Beltran’s face resembled a piece of raw meat, after taking a steady diet of right jabs, and right hooks.

Crawford never gave Beltran a chance to figure him out or disrupt his rhythm. Crawford would seamlessly transition from orthodox to southpaw. His footwork was a thing of beauty, which to Beltran’s credit, was needed. Beltran is a very good fighter and deserved the shot at a Crawford’s WBO world lightweight championship belt. Beltran tried his best to employ some deception with his aggression. He feinted. He jabbed and doubled jabbed. He moved his head (at least early). He tried to set traps, and he tried lead rights against Beltran’s southpaw stance.

His efforts were enough to keep the fight exciting, but not enough to win rounds. Crawford carved him up, and kept up his advantage into the late rounds, even though he had to know he was way ahead on the score cards He continued to dominate, even though it meant continued risk for him. Scores from the three judges were: 120-108, and 119-109 (2x). It was obvious, Terence wanted to please his fans, all of them, not just those in Omaha, Nebraska.

This twenty-seven year old fighter is a bit of dazzle for the midwest or Mid-America. It has been many years since a fighter has brought any ray of light into the boxing world, at least not to the degree that Terence Crawford has done. He seems to have all the ingredients. He is an excellent fighter, and a boxer puncher. He is willing to fight anyone, and he has the skills to deal with any style. Roy Jones, Jr, HBO analyst, paid Terence a high compliment when he said, Terence is the best at transitioning from right to left and back again since the great Marvin Hagler. Terence doesn’t seem to be the type to let such praise go to his head. He is a talented, but humble young man, one who has impressed fans far beyond just Omaha.