Scott has been tirelessly working with the former WBC heavyweight champion Wilder (42-1-1, 41 KOs) to improve his left hand, jab, and working on his upper body movement. Thus far, the results don’t look promising.

Crawford says that if Wilder hasn’t made corrections in those areas of his game, Fury (30-0-1, 21 KOs) will likely win tonight.

Terence wants to see more boxing from Wilder, not just him looking for one single knockout punch like he’d done in his previous two fights with Fury.

Fury will be defending his newly won WBC heavyweight title for the first time tonight against former WBC champion Wilder in the main event on ESPN+ PPV at the T-Mobile Arena in Las Vegas.

The winner of tonight’s Fury vs. Wilder III  fight will be in a position to take on the Oleksandr Usyk vs. Anthony Joshua II rematch in 2022.

Wilder must use his left hand more

“It’s going to be a good fight. If Wilder comes in and develops a better left hand and some upper body movement and some rhythm, he could make a different fight this go around,” said Terence Crawford to Fighthype in analyzing the Fury vs. Wilder 3 trilogy tonight.

“But if he [Wilder] goes in there looking for the one punch, he’s going to lose. Fury,” Crawford said when asked who wins the Fury-Wilder III fight.

“I got Fury by a slant,” said Teofimo Lopez in leaning in the direction of Tyson beating Deontay. “I got to see the first round.

“They’ve been talking about it, but I want to see. I feel they’re going to come right into it.

“Absolutely, I believe it’s going to be better than the first two fights combined, and that’s why we have this trilogy because both of them know.

“They’ve both tasted the canvas. They both fell, and they know their power,” said Lopez Jr.

“He’s [Fury] is going to do the same thing he did before. I just see this fight going six or seven pounds,” said Teofimo Lopez Sr. to Fighthype.

“Tyson Fury is mentally good right now, he’s probably at 80% mentally great, and 20% is his style. He fights tall.

“I see him knocking out Wilder in the fifth or sixth round. It’s probably going to be a little bit earlier than that time, but he’s got to go in there and approach the fight.

“If he [Fury] fights on the outside, he’s in danger because Wilder with one punch can change the fight, but I got Fury in that fight,” said Teofimo Sr.

It’s not likely that Wilder will use his left hand more or employ upper body movement the way Terence Crawford would like to see from him.

In watching Wilder’s workouts with new coach Malik Scott, his left hand looked as weak and underdeveloped as ever. It’s like batter trying to change their stance for the first time and having no power from the opposite side.

If Wilder worked on his left hand for years and years, he might develop some punching power in that hand. But at 36, Wilder doesn’t have that kind of time to devote to improve his left.

Fury will be looking to steal rounds

“Tyson Fury – Wilder, I think this is a great fight. I’m rocking with Wilder; I love Wilder and everything he stands for,” said Devin Haney. “I hope he [Wilder] does knock him out. If Fury goes in there and wins, I won’t be surprised, but come on,  Wilder. Let’s do it,” said Haney.

“Fury – Wilder, that’s a tough one,” said Jamel Herring. “In the first two fights, I picked Wilder because the equalizer with that big a** right hand.

“But it’s like sometimes you may be at a case where someone may have your number and as the old saying goes, ‘styles make fights,’ and that style.

“But I look at Wilder now; he seems really determined for revenge. It looked different because it was something we ha’n’t seen him doing,” said Herring about Wilder’s video clips of him working out with new coach Malik Scott.

“I’m going by his demeanor as of late. He seems like he’s razor-pinned, sharp focus, and it’s like Fury is being Fury, but you never know.

Fury plays many head games, so you don’t know if he’s focused and taking it seriously or not or if he’s just trying to get into Deontay’s head.

“In looking at Deontay, he put on more weight to stand tall with the bigger man [Fury], which is something he’s really not used to.

“There’s a lot going into that fight, and I keep going back and forth with it. We’ve seen it before, even in the last two fights.

“Tyson didn’t have the physique like you would think where he could be elusive or slick any damn way.

“It’s not him,” said Herring when asked about Fury keeping his shirt on during Friday’s weigh-in and not looking in great shape, “Herring said.

I’m afraid I disagree with Herring on his view that Fury will be looking to “steal” rounds against Deontay.

If anything, Fury will continue to use the Krong Gym approach of fighting taught to him by his trainer SugarHill Steward and will be looking to batter Wilder into submission like last time.

Fury already proved that if he put pressure on Wilder, he couldn’t handle and folded almost immediately. Wilder was already worn down by the pressure Fury was placing on him by the third round. From the fourth on, it was a massacre with Wilder taking a terrible beating from Fury.

It was pointless for the contest to continue, but Wilder was left out there until the seventh before his trainer Mark Breland threw in the towel.

To this day, it’s baffling to understand why Wilder was upset with Breland for stopping it.

If you look at the seventh round, Wilder had no chance and was the stuffing beaten out of him by Fury while pinned against the ropes. Tonight, we’re likely to see a replay of that.

“Some people thought that even with the knockdowns, he probably won the first fight, and that’s just Tyson Fury.

“He’s not going to be your AJ [Anthony Joshua] or Lennox Lewis in terms of his physique, but he still goes out there and gets the job done.

“He [Wilder] can get it done any night. He’s got one of the best weapons in the world [his right hand].

“I don’t care what anyone says. Anyone would love to have a one-punch knockout power in boxing.

“Anybody would want to have that. As I said, you got to be wary of that, but I feel like if Deontay boxes and sets it up instead of going out there and looking for it, he may have more of a chance.

“But Tyson is going to go out there and box, steal rounds and just keep moving. He’s not stupid. Tyson Fury is a very smart fighter.

“I’m just glad we’re getting the third fight, and hopefully, we can put it to rest. So I’m looking forward to a good fight,” said Herring on the Fury vs. Wilder 3 trilogy tonight.

Fury weighed 276 lbs for that fight, which is one pound less than he did last Friday, with him coming in at 277 lbs.

It’s well documented that Fury has gotten away with his ability to fight at a high level while carrying around a lot of extra weight on his 6’9″ frame, and he came back successfully from a long 2 1/2 year layoff in 2018.

Fury is now 33, not as young as he was three years ago, and he’s now been out of the ring for 20 months.

That’s almost two years of Fury’s career that has evaporated, and he was carrying around enough fat st Friday’s weigh-in to where he didn’t want to remove his shirt. If you think that was a calculated move, you’re wrong.

Fury chose not to remove his shirt out for vanity reasons. He knows he’s in bad physical condition compared to his previous fight with Wilder and didn’t want to be open to criticism from boxing fans and the media for how badly he let himself go in the last year and a half.

There’s a better than average chance that Fury’w eight WILL hurt him in this fight, and it could lead him to get knocked out.

Although Wilder came in at a career-high of 238 lbs, his movements during the weigh-in were quick, showing no signs of him being musclebound from the weight. 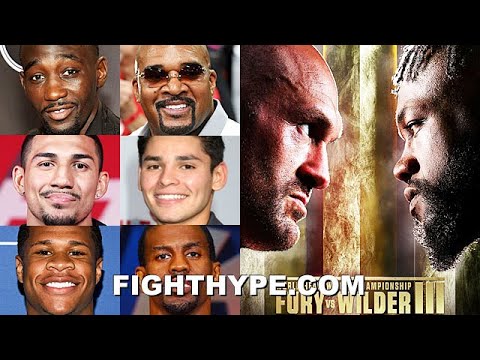