Andre Ward was the only man Carl Froch was unable to beat in a great, great ring career. “The Cobra” avenged his loss to Mikkel Kessler, this just the second loss on his record, but no return fight with Ward came – even though the two talked about a rematch for some time. Ward and Froch met a decade ago today, in the long (too long) awaited “Super Six” final.

The two best super-middleweights on the planet at the time, Ward, 24-0, and Froch, 28-1, met at The Boardwalk in Atlantic City. But this fight was no sizzler, no thriller. Instead, Ward boxed masterfully, and frustratingly, nullifying Froch’s punches and making his rival look slow. “I couldn’t really get anything going,” a beaten Froch said after the fight. “He was too slippery.” 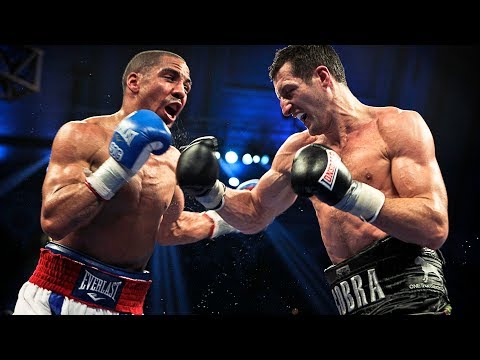 Ward later said he had hurt his hand in one of his final sparring sessions ahead of the fight, and that he hurt the hand again in the sixth round. Ward nevertheless looked like a clear winner at the end. He was, but only on one score-card. To the surprise of many (perhaps even to Froch) two of the three officials had Ward edging the fight by just a couple of points. It was 115-113 twice, while the third judge seemed far more accurate at 118-110 for Ward.

Neither man had too much of anything good to say about one another after the fight, and the disdain lasted for many years. Indeed, with talk of a possible rematch, Ward was convinced he’d be able to stop Froch in a second fight, when both of his hands were 100 percent healthy. Froch, who labelled Ward “boring,” said he’d fight him again, but only in the UK. It never happened.

Might both men have been able to raise their game in a return? Ward “won ugly,” according to Froch. Froch was “an overachiever” according to Ward. With the apparent bad blood, there should have been a rematch between these two. Ward won their one and only fight, yet Froch always did say that Ward’s style was “borderline cheating” (Sky Sports, September 2019). Did these two great fighters really sort out their rivalry?

Maybe Ward would have won a decision over Froch a second time if the sequel came, it’s certainly hard to imagine Ward knocking out the iron-chinned Froch. Or, just maybe, Froch would have fought a different fight – perhaps somewhat similar to when he shocked Lucian Bute the year after losing to Ward – and earned Ward’s respect. All these years after their WBA/ WBC/ Ring Magazine title fight, it seems these two still have very little respect for one another.