Teddy Altas thinks the judges were ready to rob WBA light heavyweight champion Dmitry Bivol of a win last Saturday night in his title defense against superstar Canelo Alvarez at the T-Mobile Arena in Las Vegas.

Atlas notes that all three judges surprisingly gave Canelo the first four rounds, having him up 4-0, and later in the fight, they each gave him the ninth round.

If the judges had given Canelo the 12th round last Saturday night, the fight would have been a draw, and you can imagine the reaction from the boxing world.

After all, this is the same venue where Canelo twice fought Gennadiy Golovkin in fights that many people believe were robberies, particularly the first match in 2017.

“The old saying in boxing that when you fight the superstar, you have to win every round and pray you to get the split decision. That almost happened the other night [in the Dmitry Bivol vs. Canelo Alvarez fight],” said Teddy Atlas on The Fight.

“I can’t see Canelo winning more than three rounds. I think you can say two rounds, but to have it a two-point fight? Are you serious?” Atlas continued about Canelo’s narrow loss to Bivol last Saturday.

“If you look at the absurdity of these rounds, it’s absurd. He didn’t win a round, Bivol, in the first four rounds. Are you kidding me? [Later when] You had it 4-4, what’s the next move? You put your guy [Canelo] ahead.

“You give the ninth round to break the tie [by giving it to Canelo]. You got your guy ahead. You know what? You kept the guy in a fight that wasn’t close. You did your freaking job; your dishonest job.

“You got your guy [Canelo] ahead going into the championship rounds. Do you think that’s a coincidence? I don’t. Here’s the thing that went astray that went haywire with the plan. Now it’s up to your guy [Canelo], the golden goose. It’s up to him to do his part and bring it home,” Atlas said.

“If you do anything more here where you acknowledge it’s not a close fight, and that’s the key you keep in your head,” said Atlas. “It shouldn’t be this close this late, honestly. But they did their job, they kept an unclose fight, close down the stretch,” Atlas said about the judges keeping Canelo in the fight despite it appearing to be a one-sided affair in favor or Bivol.

“Now they got it close, and it’s up to Canelo to bring it home because they gave him the lead, even though he didn’t earn it, and guess what? He couldn’t get it home.

“Bivol went out there and won the fight, and if Bivol didn’t win the fight by really bouncing this guy’s head around in the rounds that he did, as big as he did, he don’t get it,” said Atlas.

“It’s not fair to say, ‘Oh, you got to win it by enough.’ You should be able to win. In boxing, for some reason, people say, ‘If you’re the champ or in this case, you’re the golden goose, you’ve got to really beat the guy.’

“Okay, that’s not fair. You should just be able to win. But, he [Bivol] beat the guy. He really, really beat the guy, and it was close to that old saying. Where you win every round and hope for a split decision.

“Maybe three rounds, or if you want to go crazy, maybe four. So maybe three rounds to Canelo, but my God. They were ready to rob this kid, and he didn’t let them. They didn’t suddenly get a conscience. He just did not let them rob him,” Atlas said of Bivol. 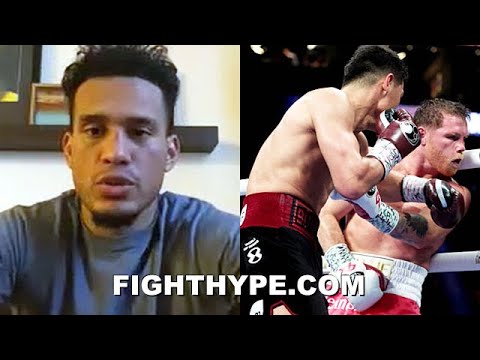