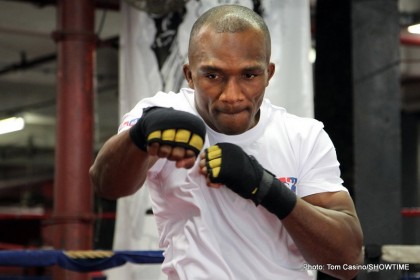 “After all these years fighting at 168 pounds, it was becoming increasingly difficult to make weight and that was a major factor in my defeats,” Bika said. “I see no problem making the jump to light heavyweight to face Stevenson and I do not feel I’ll be at a disadvantage because the champion made this transition successfully himself less than two years ago against Chad Dawson. I promise you that I will be the new champion on April 4.”

Stevenson, 37, won the world light heavyweight title in June of 2013 in Montreal, via a sensational 76-second, first-round knockout just over the then-undisputed king of the division, Dawson. The impressive victory earned Stevenson “Knockout of the Year” and “Fighter of the Year” accolades. In his first defense the following Sept. 28, former world champion Tavoris “Thunder” Cloud was meant to be a major test for the new champion, but the powerful southpaw forced Cloud to retire at the end of the seventh round.

Two months later, “Superman” concluded the year with an unequivocal victory over his No. 1 mandatory contender, Tony “Bomber” Bellew of Great Britain, who was unable to complete the sixth round. In May 2015 at the Bell Centre in Montreal, Polish challenger Andrzei Fonfara proved to be a tough challenger and fans were treated to a memorable bout as Stevenson knocked Fonfara down twice in the early rounds only to visit the canvas himself in the ninth round. Judges scored the fight 116-109, 115-110 and 115-110 for Stevenson in his SHOWTIME® debut. In his last outing, Dec. 19, 2014 on SHOWTIME from the Pepsi Coliseum, “Superman” made short work of Russian veteran Dmitry “The Hunter” Sukhotskiy, stopping him in the fifth.

Bika, fighting out of Australia by way of his native Cameroon, which he represented at the 2000 Olympics, has earned the reputation as a tough, rough brawling warrior who has fought the best. He has been in six world title fights (1-3-2), holding one of the 168-pound division crowns in 2013-14. He has fought many world champions, never been knocked out in 41 professional bouts and he was “The Contender, Season 3” reality television series champion in 2007.

“The Scorpion” demonstrated his world-class toughness and determination in fights with the world’s elite super middleweights at that time, challenging world champions Markus Beyer and Joe Calzaghe in 2006, Lucian Bute in 2007 and Andre Ward in 2010. Resilience and hard work finally paid off for Bika when he won the coveted 168-pound title, defeating Marco Antonio Periban by decision in 2013 at Barclays Center in Brooklyn, N.Y. He successfully defended his title six months later by fighting to a 12- round draw with Anthony Dirrell on SHOWTIME in 2013. Bika eventually lost his belt in a rematch with Dirrell on SHOWTIME last August.

PBC on CBS, headlined by the light heavyweight world championship fight between Stevenson and Bika, is promoted by Groupe Yvon Michel (GYM) and presented by Videotron and in association with Mise-O-Jeu.

Because the show is being held the day before Easter, GYM encourages the Quebec public to come as families and groups by offering two tickets (in the stands) for-the-price-of-1 special offer for two days only (Saturday, Feb. 28 and Sunday, March 1) for those purchasing tickets directly through www.billetech.com.

Adonis Stevenson has not been beaten for the past five years and boasts an impressive record of 25 wins (21 by KO) and only one loss.

Sakio has not been active in the ring since relinquishing his WBC title to Anthony Dirrell in August 2014 and is hungry to again become a world champion.

“It is a big opportunity; I have to put everything on the line. I’m focussed, fit and pushing myself to become a Champion again”

“Adonis is nothing special to me. I have fought the best southpaws in world; he has never fought someone like me. I’m relentless; I will work very hard and strip that belt from him”

Sakio has recently returned from his country of birth Cameroon where he was accompanied by filmmakers Ben Damon and Calum Stewart who have been following Sakio around the globe over the past 12 months filming a feature documentary about the Australian’s amazing life from poverty in Africa to becoming the world champion.

SAKIO BIKA’s career record is 32 wins (21 by KO), 6 loses and 3 draws.  SAKIO won the Australian middleweight title, before his victory in Season 3 of the American reality TV show ‘THE CONTENDER’. He won the IBF Pan Pacific, NABF, WBO Inter-Continental and IBO super-middleweight titles before beating undefeated Mexican Marco Antonio Periban in June 2013 to be crowned the WBC super-middleweight champion of the world.