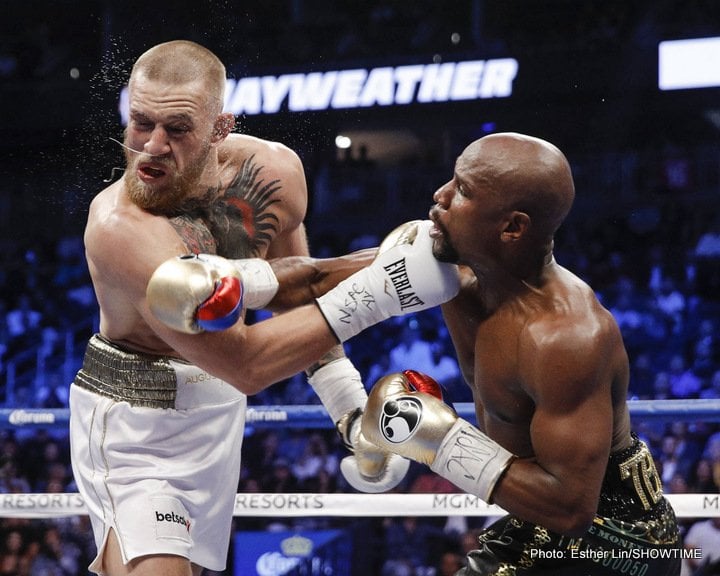 I don’t blame Mayweather for taking this fight. Put yourself in his shoes – some obnoxious ponce incessantly trash-talks you, AND you get to beat the shit out of him? Like legally? For hundreds of millions?

And I don’t blame Mayweather for ignoring his critics. At present, they might bash him for beating a neophyte. But imagine if he had ignored McGregor’s challenge – how many of those same critics would attack Floyd for NOT taking that fight? For passing an easy payday like an idiot? For denying the fans the fight actually DID want, despite their simultaneous eye-rolling? For being afraid of McGregor’s unfathomable power, which as everyone knows, makes the earth tremble and rips holes in the space-time continuum?

The hell with it. Might as well take the millions.

But getting to the point – what you just saw counts, Mr. Arum. Period. Mayweather fought an opponent in a fair bout sanctioned under all the recognized rules of boxing (despite the concerns of more than 100 doctors), and emerged victorious. He has no losses, nor any draws. Thus, his record stands at 50-0.

Everyone’s entitled to their opinion, but I’m not entitling anything here. Opinions have no effect on objective reality.

Arum says the 50th win does not count because McGregor was making his debut? Let’s take Arum Logic a step further, and see what questions this creates.

Every fighter – including the greatest champions – builds up an early diet of easy pickins’. Arum knows this full well, having personally arranged such fights for Floyd’s early career. Now take a look at the record of the sainted Rocky Marciano, whose cherished 49-0 record fell to Mayweather. You’ll see more than a smattering of losing records and debut fighters who probably brought even FEWER tools and LESS training to the ring than McGregor did. In fact, a quick trip down Boxrec Lane shows that prior to Saturday, both Marciano and Floyd had beaten the same number of debut fighters – two each.

Just padding records early in their careers – fine. But according to Arum logic, there must come some point where victories over insufficient opposition no longer count.

Does this mean that wins against losing records don’t count either? Must a committee of detractors judge each individual bout to determine its worthiness? As a side note – said committee might be a bit prejudiced with Arum on board, seeing as his bitter split with Mayweather cost him a cut of $1 billion in earnings.

It also bears mentioning that historically, champion fighters often stayed sharp by beating tomato cans in between their title fights. In fact, Julio Cesar Chavez even continued the practice into the modern era. If wins versus debut fighters don’t count, then certain records need some serious reevaluation.

Does this mean we’ll finally stop fawning over the 132-3 record of Jimmy Wilde? Or that we subtract at least a dozen wins from Chavez’s scorecard? And what of the modern-day career of Thai flyweight Pongsaklek Wongjongkam?

Come on. A win is a win. Obviously, a fighter with 10 wins over elite competition fares better in legend than the Lamar Clark sideshows. But that’s where discussions of greatness actually come into play, and the answers are never clear-cut.

Mayweather’s record is instead a question of mathematics. Of counting past 49. Fifty wins. Zero losses. Don’t read ‘em and weep – COUNT ‘em and weep.