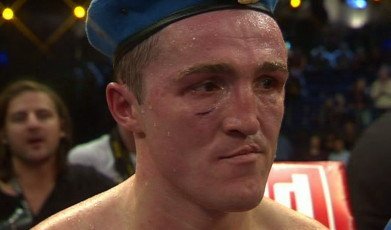 Russian cruiserweight and former champ Denis Lebedev has announced his retirement from the sport – At age 39 and seemingly unable to secure any further meaningful fights, the gutsy southpaw who engaged in a number of thrillers during his 34 bout, 18 year pro career announced his decision to “say goodbye” on social media.

“It’s high time to say goodbye to big sports, Lebedev wrote on instagram. “As a true man, husband and father I must focus on my great family and do my best to give those closest to me my full attention. However, life does not stand still, and together with you all we are going to do good deeds – be they big or small – for our country and our youth.”

Lebedev added plenty of thrilling drama to the cruiserweight division. Holder of both the WBA belt and later the IBF title, the man from Chekhov began his pro career as a light-heavyweight back in February of 2001, pounding out a six-round decision. Soon making the move up to 200 pounds, Lebedev won the WBO inter continental belt with an impressive third-round stoppage of Welshman Enzo Maccarinelli. Then the big fights came.

After dropping a hugely debatable decision to defending WBO cruiserweight boss Marco Huck in December of 2010 (Lebedev leaving the ring in disgust, so sure had he been that he deserved the decision), Lebedev knocked off a pair of living legends in Roy Jones, who he brutally KO’d in the tenth-round, and James Toney, who he pounded for a full 12-rounds six months after the decimation of the once-untouchable Jones.

It is perhaps the gruesome war Lebedev had with Guillermo Jones in May of 2013 that sticks most in the minds of fans, though. Lebedev and Jones went to war and the younger man paid the price big-time. Lebedev refused to quit even though his face had been severely disfigured; writers later saying he looked like the Elephant Man, so badly swollen was his head and face. Lebedev was stopped in the eleventh-round of a genuine X-rated affair. Later, Panama’s Jones, who began his career as a welterweight, failed a drugs test and the fight was changed to a no contest.

Lebedev carried on, having some success, but more than a few fans felt he was never the same force after shedding so much blood and being so badly banged up by Jones. Lebedev bagged another belt and he gave us one more great effort/fight in his losing battle with Murat Gassiev in December of 2016, the two going hammer and tongs, Gassiev getting a split decision nod. Lebedev endured layoffs and inactive spells but he did manage three more wins after losing to Gassiev.

Retiring with a fine 32-2(23) record, Lebedev may never get into The Hall of Fame but he sure made his mark on his chosen sport.