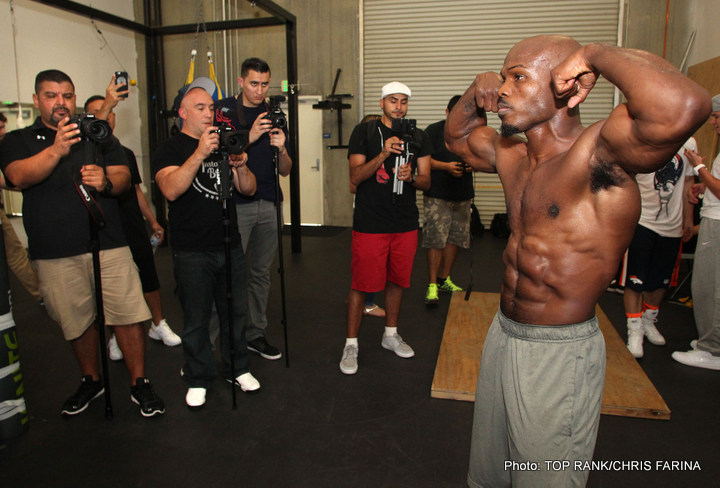 The 32-year-old star has claimed he is a much improved fighter since joining forces with Mike Tyson’s one-time cornerman and that he is unfazed at anything the relentless Rios will throw at him.

“I don’t care what Rios is doing in his camp. I am only concerned about what I am going to do on fight night. I am absolutely, totally focused. I am not the same fighter I was before,” said Bradley.

“There were notes about what I did right and what I did wrong. No trainer of mine has ever prepared for a fight like Teddy has for me against Rios,” he said.

Two-weight champion Bradley, who controversially beat Manny Pacquiao in their first meeting before losing the rematch, his only loss to date, knows exactly what Rios is going to bring to the ring ahead of their fight, exclusively live on BoxNation.

“Rios can bring on the pressure all night long and we will deal with it. We are prepared for intense pressure. The only chance Rios has is a lucky punch and that’s not going to happen.

“Teddy Atlas brought in two sparring partners who have put pressure on me every single second for the last three weeks. Rios is living on a prayer and he knows it,” Bradley said.

“My game plan is to stay totally focused for 36 minutes of fighting. Rios fights hard, is relentless, can endure pain and look for one shot to hurt me.

“I want this fight badly. I plan to keep it in control my way. Teddy is full of wisdom. Together we are going to win this big fight,” he said.

The respected Atlas is also backing his man to show his maturity in the ring as he takes the reins for their first fight together since Bradley released long-time trainer Joel Diaz.

“We looked at a lot of videos of Rios to take a look at how he moves and his tendencies. We are not concerned about what is happening in the Rios camp because I’ve seen fighters have bad camps and fight well and have seen fighters who had great camps not perform on fight night,” said Atlas.

“Tim did his job to prepare for Rios. He knows what it takes and what we have to do to win on Saturday. Tim is ready to fight. We both know what needs to be done – total focus for 12 complete rounds – to win this fight.”

Former lightweight world champion Rios though has other ideas as he comes off a blitzing third round win against the tough Mike Alvarado earlier year.

29-year-old Rios is known for his all-action style and is ready to claim his second world title against his fellow Californian.

“We are ready for the best Tim Bradley, the one who beat Juan Manuel Marquez. I have been in camp in Riverside, California for three months. This is the Camp Zone,” said Rios.

“We brought in three kinds of sparring partners – a boxer, a brawler and a boxer-brawler. I want to get back on top in boxing. Bradley is in my way. Bradley is going to be my ticket back to the top,” he said.