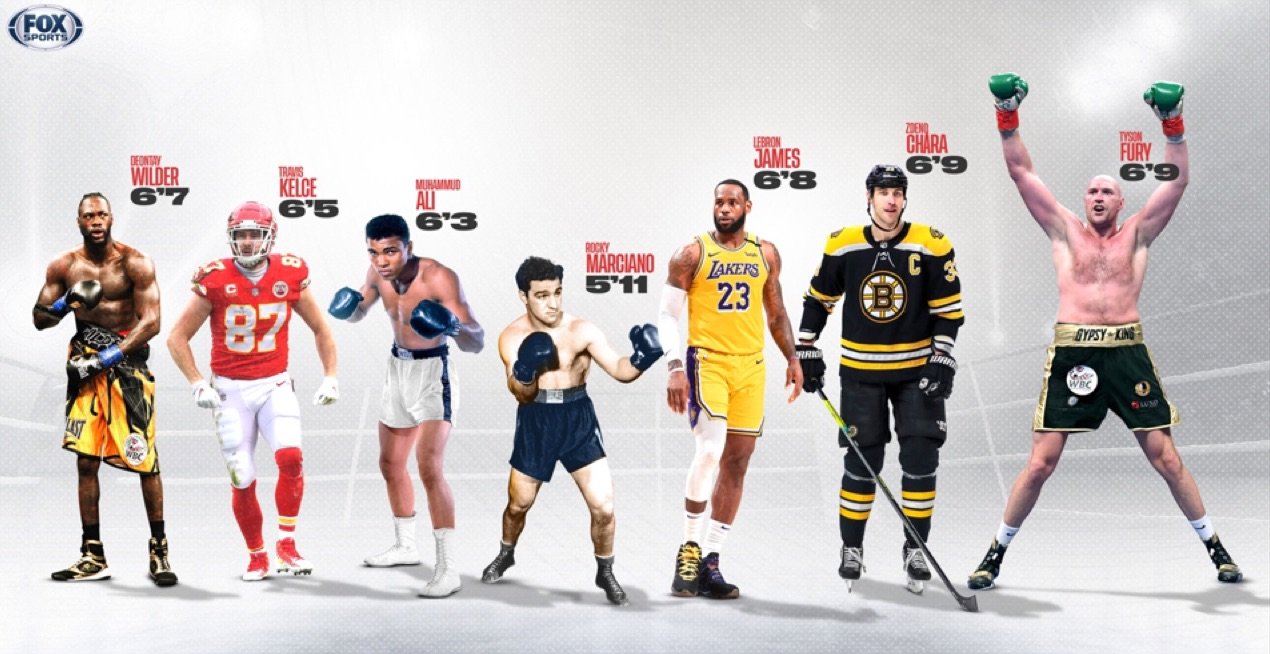 Standing 6’7″ and 6’9″ respectively, Wilder and Fury create the greatest combined height ever seen in a bout for the WBC, Ring Magazine and lineal heavyweight titles, standing a collective 13 feet and 4 inches. The only heavyweight title bout “taller,” so to speak, took place in 2007, when the 7-foot Nikolay Valuev defended his WBA heavyweight title against the 6’6″ Jameel McCline. But never before have the sport’s very best big men been as large as they are today.

To put in perspective how large Wilder and Fury are, it’s best to compare them to the land of giants: The NBA. Consider the fact that at 6’7″ and in the neighborhood of 220 pounds, Wilder is the same size as Los Angeles Clippers small forward Kawhi Leonard. Fury, meanwhile, is nearly identical to LeBron James in terms of height and weight.

These days, a look at the Top 10 of any rankings you choose shows that most contenders are built like Super Bowl champion tight end Travis Kelce, who stands 6’6″ and weighs around 250 pounds.

As anyone who watched the thrilling first contest between Wilder and Fury will know, the two are indeed athletes, far from the lumbering behemoths you might expect men of their measurements to be. Wilder might be known for his titanic one-punch power, but he’s displayed some truly dynamic movement in the ring as well. Go watch the tape of his knockout of Bermane Stiverne and watch him bound laterally to create angles before landing his devastating shots, juking like a wide receiver in the open field, and you can see why Wilder dreamt of playing college football at Alabama when he was in high school.

Fury never dreamt of doing anything other than boxing-how could you when you were named after a heavyweight legend and born into a family rich with fighting history in Ireland. But the “Gypsy King” was also born with remarkable nimbleness to go along with a lifetime of developed boxing acumen, gliding around the ring and boxing with a style that would befit a welterweight, not a power forward-sized heavyweight.

Wilder and Fury are distinctive because ironically, giants aren’t usually dominant in sporting fields. While some have been all-time greats-i.e. the 6’9″ Boston Bruins defenseman Zdeno Chara, who is a lock for the Hockey Hall of Fame-often times big men are known mostly just for being big, and don’t reach the pinnacle of their sport. And understandably so. Being colossally large is often a hindrance in as many ways as it’s an advantage, particularly when it comes to movement and dexterity. The NFL’s tallest player, seven-footer Richard Singh, played just eight career games, the MLB’s all-time tallest player, the 6’11” Jon Rauch, was a journeyman reliever, and tennis’ 6’10” and 6’11” skyscrapers Ivo Karlovic, John Isner and Rilley Opelka have no majors to their names.

As human beings have become bigger and stronger over the years, naturally, so have boxers. Rocky Marciano, standing 5’10 ½” and weighing just above 180 pounds, would be a tiny cruiserweight by today’s standards. Joe Louis and Muhammad Ali, considered by many to be the two greatest heavyweights of all-time, and certainly not tiny fighters in their time, stood 6’1 ½” and 6’3″ respectively. Theoretically, Louis would give up nine inches in reach to Fury, whose wingspan is 85″. There were outliers in earlier eras, of course-Jess Willard and Ernie Terrell were 6’6″ and above and captured heavyweight titles-but for decades it was possible to be the size of a modern cruiserweight and not just compete, but be an imposing figure in the division.

Things began to change in the late 80s and 90s, when Tony Tucker, Riddick Bowe and Lennox Lewis, a trio of 6’6″ heavies captured belts. But the modern era was ushered in by Vitali and Wladimir Klitscko, the 6’6″ brothers who essentially ruled the division for the better part of a decade before Fury unseated Wladimir for the lineal crown in 2015.

Boxing has had its share of giants through the years, many of which have fallen short of the elite levels. In recent times, fans will remember the much-hyped American prospect Tye Fields, a towering 6’8″ southpaw who despite a massive amount of hype, never fought for a world title. Julius “The Towering Inferno” Long started his career 5-0, and at 7’1″ with a 90″ reach looked like a force to be reckoned with, before settling in as one of the sport’s most notorious journeymen and reliable sparring partners.

Wilder and Fury are a remarkable blend of size and athleticism and are bucking the trend that you can be “too big” to be great. As the rematch nears, it’s exciting-or perhaps scary-to think about the next evolution of heavyweights that will come after these two. There was a time when the great George Foreman, at 6’3″ and with a 78″ reach, or Larry Holmes at 6’3″ with an 81″ reach, were considered among the most daunting physical presences to ever step in the ring. But Wilder and Fury have set a new physical standard. Will NBA-sized heavyweights become the norm in the coming years?

At least for the moment, Wilder and Fury are far from normal. They’re colossal presences, yes, but they’re also the two very best heavyweights in the world at the peak of their powers, looking to follow up one of the most memorable fights, and hotly debated draws in recent history.

Who will stand tall on February 22?