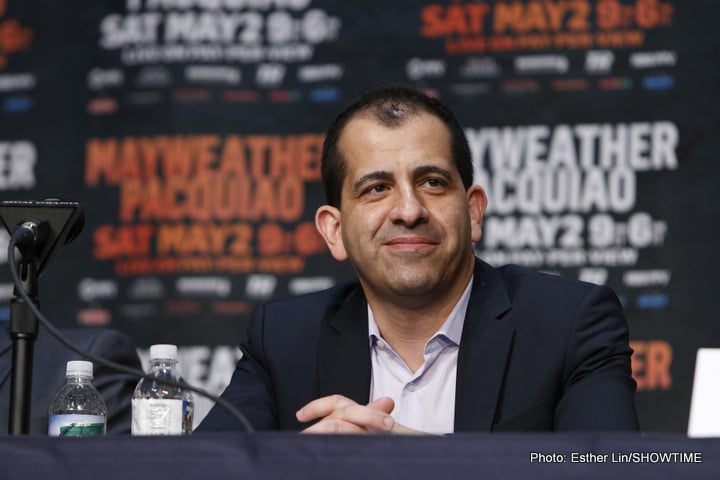 Anthony Joshua could be heading towards his US debut in his next fight. Promoter Eddie Hearn has been looking over potential venues in Las Vegas, with the T-Mobile Arena now the frontrunner to host the expected rematch between the reigning WBA/IBF heavyweight champ and former king Wladimir Klitschko (Klitschko has still to officially confirm that he will face AJ for a second time).

And Stephen Espinoza of Showtime says Joshua-Klitschko II “would be the biggest heavyweight Vegas fight in probably a couple of decades.” Joshua wants it, Hearn wants it and Espinoza wants it – now it just needs Klitschko’s signature on the contract to make the rematch happen in Vegas. At least this is how it seems.

“It feels like it’s coming to a head,” the Showtime boss told Sky Sports. “Eddie is much closer to it at this point, but from my vantage point, I think a lot of the options have been explored and dismissed, and I think a decision is forthcoming pretty quickly. It’s no secret we’ve been salivating about getting him over here and certainly that would be a phenomenal fight. It would be the biggest heavyweight Vegas fight in probably a couple of decades, so we would love to host it.”

The last true heavyweight mega-fight to be held in Las Vegas was the infamous Holyfield-Tyson II “Bite Fight,” which celebrated (if that’s the right word) its twentieth anniversary a couple of weeks ago. It is high time, then, that a big, big heavyweight event of a fight took place on The Strip. And judging by the great action fight Joshua and Klitschko thrilled us all with back in April, the return fight could well be the fight to do it.

Does Klitschko really want it though? If not, then who knows what Hearn will put into play as his Joshua Plan-B. It could be IBF mandatory challenger Kubrat Pulev challenging Joshua in Cardiff, Wales. Here, though they are both decent, neither the venue nor the opponent have quite the same magical ring to them.