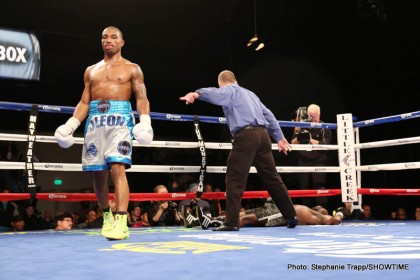 Each won by convincing knockout, much to the delight of Floyd, who watched from ringside.

“I’m proud of my team,’’ he said. “We have a talented group of fighters and they proved that tonight. It was a nice crowd of boxing fans and I enjoyed myself. The city of Shelton, Wash., welcomed us with open arms and the hospitality was great! I’m looking forward putting on more exciting shows like the one Mayweather Promotions put on tonight.’’

“What we saw tonight was four prospects doing what they had to do,’’ said ShoBox analyst and boxing historian Steve Farhood afterward. “For Chris Pearson it was an introduction and for Love, Jack and Bey it was a re-introduction.

“With the exception of the Jack fight, the bouts were a bit one-sided but in each fight the ending was spectacular.’’

Love, 26, in his first start in seven months, finished Simon, a former two-time world title challenger, with a devastating right hand at 2:48 of the sixth.

“This was a good fight,’’ said Love, who moved up to 168 pounds for the fight and was making his first start for trainer and former light heavyweight world champion, Eddie Mustafa Muhammad. “This guy was a vet. I knew I couldn’t just go in and blow him away. I knew I had to work angles and fight smart.

“But I had to do something. Everybody on my team before me was knocking everybody out. We work so hard as a team. We’re always behind each other. There is no limit to what we can do.’’

Super middleweight Jack, who is ranked No. 5 in the WBC, No. 6 in the WBA and No. 12 in the IBF, scored three knockdowns in the sixth round to turn back a determined bid by Medina, a former WBC Silver super middleweight champion. A fight that was relatively close after five rounds was stopped by the referee at 2:30 of the sixth.

“He was tougher than I thought he’d be,’’ the 30-year-old Jack said. “I’m known as a slow starter and it took me a while to break him down, but it felt great to get that knockout.

“I thought the referee would stop the fight after the first knockdown. After the second knockdown I thought that Medina was definitely done, but then he got up and the fight went on and I was like, I gotta go for the kill.’ ’’

Bey, 30, regained his winning ways by destroying the aggressive-minded Cardenas, finishing him with a single left hook at 2:22 of the third.

“It always feel good to get your hand raised,’’ Bey, a 135-pounder, said. “I know he was going to come out strong and try and catch me in the early rounds. The fight before me ended so quickly I’m not sure I was totally warmed up so I just took my time.

“This guy was not an easy opponent. But I wanted a tough fight. Honestly, I didn’t even know I threw the punch that knocked him out. It was so automatic, just like I do all the time in training. It was like hitting the mitts. It’s good to get back on track.’’

Pearson, 23, set the tone for the ShoBox night of knockouts. He staggered Ferreira with a three-punch combination that knocked him back and then followed with a flurry of punches before the referee quickly stepped in and stopped it.

“I trained hard and was prepared to go 10 rounds, but I knew if I caught him right I could take him out of there,’’ Pearson said. “I’m just glad to give the fans what they love to see.

“This was a good win, but now it’s time to get ready for the next one.’’