Boxing fans may soon need to pay to watch Shakur Stevenson fight on ESPN PPV if he defeats Oscar Valdez on Saturday night, and picks up a small handful of similar important victories.

Gervonta ‘Tank’ Davis has been fighting on pay-per-view since his win over Leo Santa Cruz, but it’s unclear whether he’s bringing in a lot of buys, in part due to the weak opposition he’s been facing.

It’s going to be difficult for Stevenson to become a PPV attraction if he’s fighting regular contenders and belt holders.

If Stevenson, 24, beats Valdez on Saturday, there will be no one left for him to fight in the 130-lb division that has a big enough name to increase his popularity.

Shakur says he wants to stay at 130 long enough for him to become the undisputed champion. That means Stevenson will need to devote the remainder of 2022 to the division, hoping that his promoters at Top Rank can set him up with a fight against WBA champion Roger Gutierrez and IBF champ Kenichi Ogawa.

It would be better for Stevenson to forget about investing energy in becoming the undisputed champion at 130, and instead move up to 135:

“I’ve been preparing for this fight my whole life. You have to understand that I’ve been boxing since I was five years old,” said Shakur Stevenson to Fighthype when asked if he’s fought good enough opposition to prepare him to fight Oscar Valdez.

“When I fought Chris Diaz and Joet [Gonzalez], who was an undefeated fighter. It doesn’t matter to me. I’m going to show y’all when it’s time.

“He’s a great fighter, but my confidence comes from me believing in myself. If they don’t have any faith or hope of winning the fight, they’re going to lose,” said Stevenson in stating his philosophy on fighters that win.

Stevenson fails to recognize that there are countless fighters that win fights all the time that they didn’t think they could going in the bouts.

“I’m thinking 100%, I’m going to win this fight. I see my superstar boosting a lot higher than what it is right now,” said Stevenson on how the boxing public will react if he defeats Valdez on Saturday.

“I see the world paying attention to me a lot more, and I can be a pay-per-view superstar real soon. I think boxing is getting bigger and bigger. You got a lot of fighters that are going to bring boxing back alive.

“It feels real good, but I got to do it first,” said Stevenson when asked what his thoughts are about Canelo Alvarez giving Valdez tips on how to beat him.

“After I do it, I’m going to feel real good knowing that I beat Canelo, [Eddy] Reynoso, Oscar, and Oscar Valdez too. I feel like that’s a victory in itself,” said Shakur. 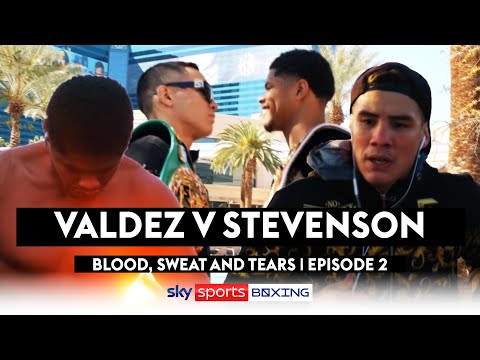