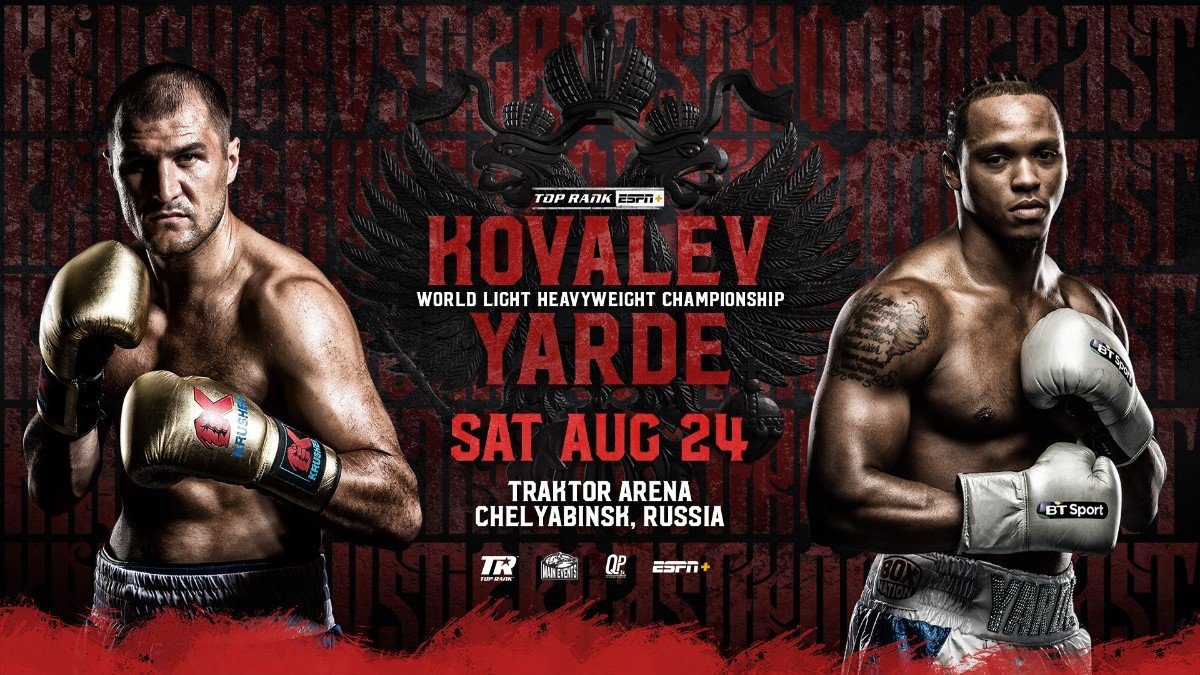 Here are a selection of quotes from the media event ahead of Saturday night’s show.

“I haven’t done no trash talking. I don’t do trash talking. I posted pictures, to me they are good pictures. I am a fighter, that’s what I’m meant to visualise. I’m meant to see these things in my mind, the same way Kovalev probably sees things in his mind. As fighters we want to do the best we can so we visualise what we want to happen. I posted a picture that a fan made, when I saw this picture I reposted it as that’s what’s going to happen.” (In reference to a journalist’s question on an Anthony Yarde social media post)

“I believe that right now I’m mentally very strong and I believe what happens on the night is what matters.”

“I’m just going to literally go in the ring and be myself. I’m going to focus on myself, be the best that I can be and get the knockout victory because that’s what I feel like I need to do to win the fight.”

“I don’t know which round. I’m not a psychic… but that’s my plan. In boxing you can’t predict rounds. I’ve just got to go in there with a goal in my head and produce.”

“This is my first time in Russia. I’m enjoying myself, I’ve been treated well and I’m enjoying the country but I’m not nervous. This is why I’m smiling so much. Because where I’ve come from, I’ve rose very quickly to be here, so I’m happy to be at this level and I’m going to make the most of it.”

“No disrespect to Kovalev, he’s been a champ for a long time, he’s unified, he’s been there and done it. I’m very ambitious and I’m literally just hungry and I want to get to that stage and change my life. I’m sure he wanted to change his life when he started so I’m at that stage now and I’m just aggressive with my approach and how hungry I am.”

“Life is about challenges and you don’t know if you can do something until you try. I’m here to do a job. It don’t matter who the crowd is rooting for, Kovalev would probably say the same… once you get in the ring, it’s you and your opponent and that’s all that matters.”

“I am indeed very pleased to be home. We have a big fight ahead of us. We’ll try to do our best to come out happy and very pleased after the fight.”

“My career and my schedule doesn’t really let me live here. I try to be as far as possible from home so I can work harder and not lose energy.”

“We did have an offer (from Canelo Alvarez) but we can talk about that after Saturday night. Official agreements were already made with Antony Yarde. My primary task is to defend the title. If the fight is still interesting for Canelo afterwards then OK.”

“I understand Anthony Yarde’s ambitions. He calls himself a lion but to me he is a cub. He is so young. I will have to get rid of all that baby fur off his skin so he will run away back home. It is clear he comes here and he wants to be like that. I have this experience. Now is my time.”

“Thanks again to Main Events, Egis Klimas, Top Rank, RCC Boxing Promotions and Krusher Promotions in helping us to get the deal done and over the line. It wasn’t the easiest deal, it took some time but we’re here and we’re here to win.”

“Credit to Anthony, he’s stepping up to the challenge. It’s been mentioned already Anthony has had 18 fights, 12 amateur fights, which I believe is 6 or 7 less than Sergey has had professionally… it’s a testament to his character and the belief that Tunde has in him.”

“We are fully aware and know about Kovalev and what he’s capable of. He’s a fantastic boxer and will go down as a potential future Hall of Famer.”

“It was actually on our promotion in the UK back in 2013 when he knocked out Nathan Cleverly to win the title.

“Anthony is here for Queensberry Promotions and for the UK to get the title back.”

“I’m his sparring partner, Tunde Ajayi. I’m Anthony’s best sparring partner. Because I believe just like in the old martial arts movies that the teacher is the trainer of the student.”

“I have developed a system which I know is capable of bringing a fighter from an embryonic stage to the stage where we are now.

“The Chelyabinsk region and the South Urals are the center of energy power. Here are the Ural Mountains and the country of the cities of Arkaim. And only in such a place can integral and purposeful people, such as Sergey, be born. Of course, we are all very proud of him. When Sergey enters the ring, he always remembers his home region. And his every victory is a victory of all residents of the Chelyabinsk region. ”

“We started working with Sergey in 2009, and in 2012 a contract was signed with a promotion company. Ten years ago, we believed in each other and started working. And today we have created each other. Today I have 17 people from the countries of the former USSR, the guys are good and can become champions. ” 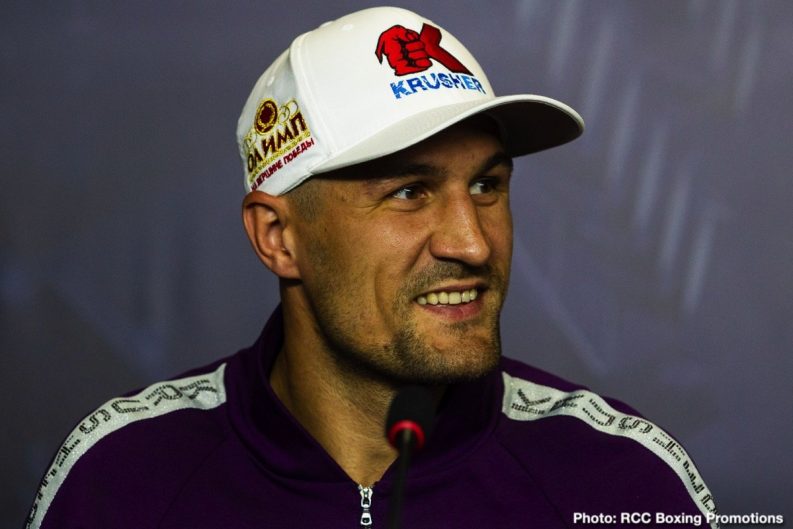 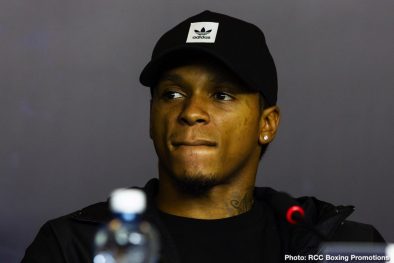 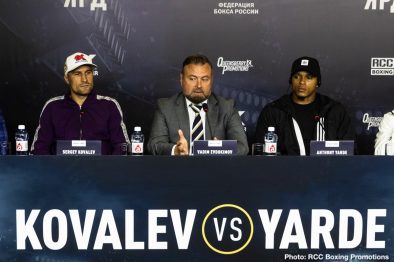 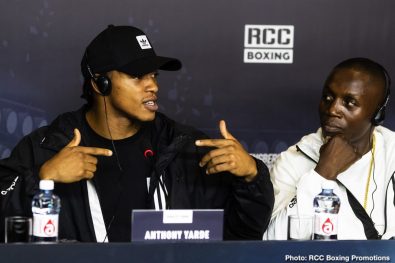 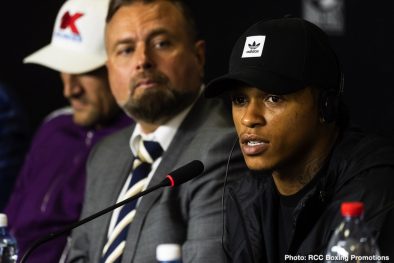 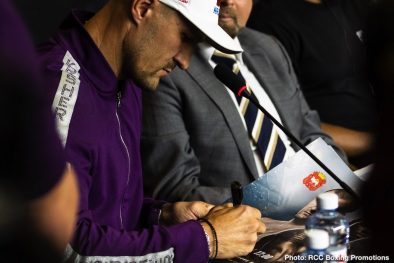 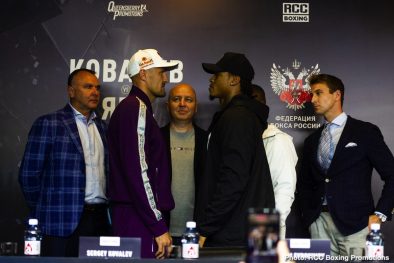 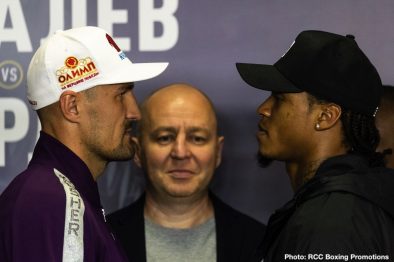 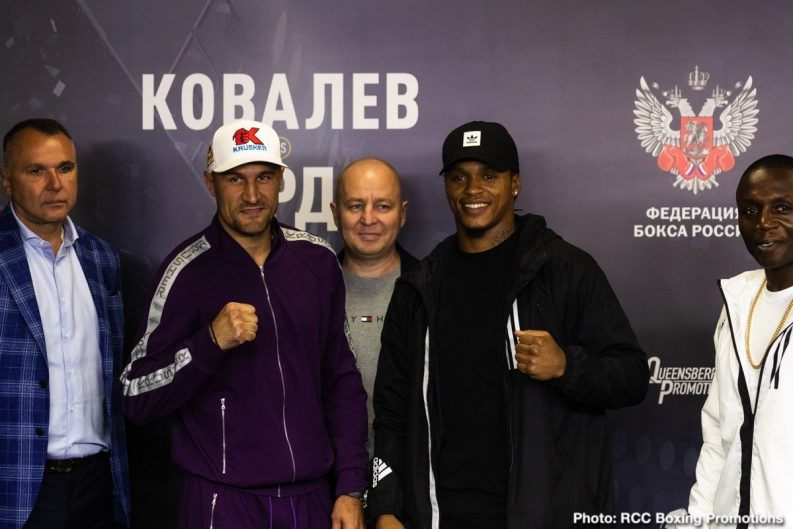 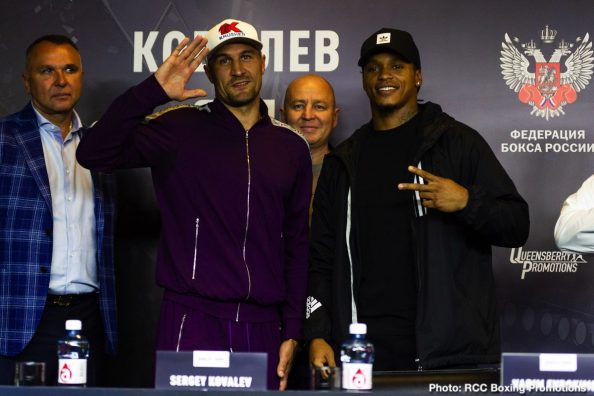 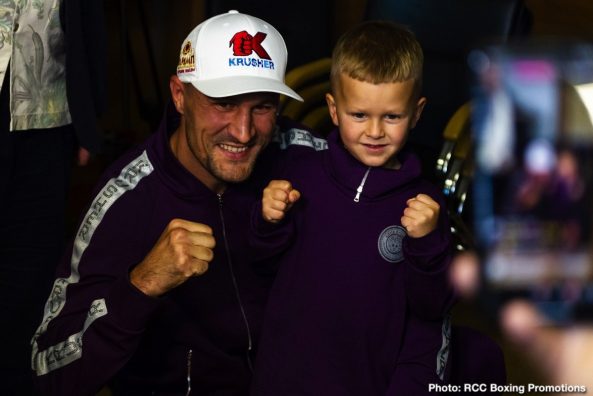 WATCH LIVE ON ESPN+ IN THE US

Kovalev-Yarde will stream live and exclusively in the United States on ESPN+, the leading multi-sport streaming service, beginning at 12:30 p.m. ET/9:30 a.m. PT. The stream will also showcase the co-feature bout between unbeaten cruiserweight contender Aleksei Papin (11-0, 10 KOs), and former world title challenger Ilunga Makabu (25-2, 24 KOs). Fans in the U.S. can sign up at www.ESPNplus.com or on the ESPN App.

“I am thrilled to fight for the first time in my hometown of Chelyabinsk,” Kovalev said. “It is a dream to defend my WBO title in front of all my friends and family back home. I am also thankful ESPN+ will show the fight to my fans in the U.S. Thank you to Igor Altushkin, Egis Klimas, Main Events and Top Rank for making this dream a reality, and thank you to Anthony Yarde for agreeing to fight in my home.”

“Sergey has done just about everything a professional fighter can do, other than fight in his own hometown,” said promoter Kathy Duva, CEO of Main Events. “One of the sport’s greatest road warriors, Sergey will finally get the chance to salute his legion of fans in Chelyabinsk, where he grew up. It will be an exciting, long overdue homecoming for Sergey. And I am so happy to confirm that Sergey’s many fans in the U.S. will be able to watch this great event only on ESPN+. I wish to thank Igor Altushkin, German Titov and everyone at RCC for making this all possible. I also wish to thank Bob Arum and Top Rank for their continued support.”

A world championship fight in one of boxing’s hottest divisions is coming to @ESPN+.

Kovalev coming off of win over Eleider Alvarez

Kovalev (33-3-1, 28 KOs) is a veteran of 15 world title bouts and has won the light heavyweight world titles. He’s done this on three occasions. A former unified champion, he revived his career in February by scoring a wide points win over Eleider Alvarez, the man who’d knocked him out less than six months prior. One of this generation’s most decorated champions, Kovalev holds victories over Jean Pascal, Nathan Cleverly and living legend Bernard Hopkins. In Yarde (18-0, 17 KOs), he faces a London native with a giant hand. Yarde is taking a giant step up in competition. Yarde has won his last 16 bouts by knockout. Most recently, Yarde stopped Travis Reeves in five rounds in a bout that streamed on ESPN+. This will be only his second pro bout outside of England.

Use the hashtag #KovalevYarde to join the conversation on social media.