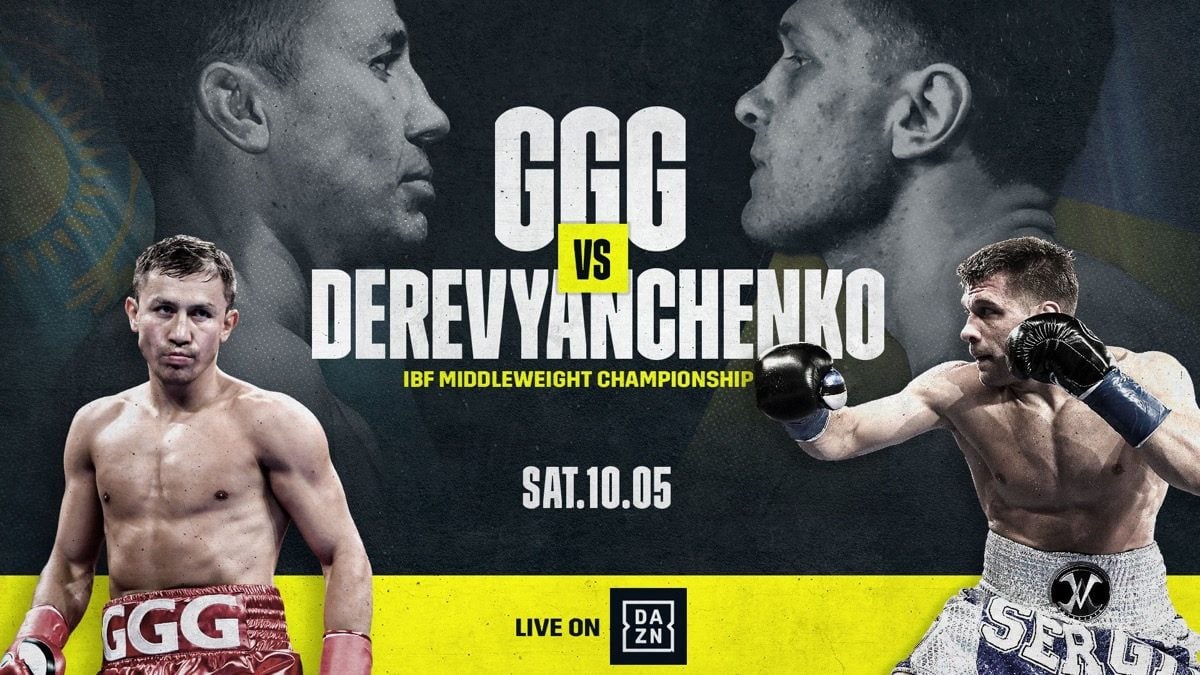 Gennadiy Golovkin and Sergiy Derevyanchenko will clash for the vacant IBF World Middleweight title on Saturday October 5 at Madison Square Garden in New York, live on DAZN, in a fight brought to you by GGG Promotions and Matchroom Boxing USA in association with DiBella Entertainment.

Former unified Middleweight king Golovkin (39-1-1 35 KOs) is aiming to regain the IBF crown he held for three years before being stripped of the title following the first of his two epic battles with Mexican rival Saul Canelo Alvarez.

GGG boxes at the Manhattan mecca of boxing for the seventh time in his career as he looks to return to the summit of the 160lbs division, and ominously for Derevyanchenko, the Kazakh star has finished all six of his opponents at MSG inside the distance, with Canadian top-ten contender Steve Rolls succumbing to Golovkin in four rounds on his DAZN debut in June.

Derevyanchenko (13-1 10 KOs) challenges for the IBF belt for the second time in his career having pushed Daniel Jacobs to the limit for the vacant belt at the Hulu Theater at MSG in October, being edged out via split decision in a back and forth scrap where many gave the Brooklyn-based Ukrainian the victory. The 33 year old got back to winning ways and moved into #1 position in the IBF with a points win over Jack Culcay in Minnesota in April, and now faces fellow Olympian Golovkin in a mouth-watering battle in the Big Apple.

“Everyone knows that I consider Madison Square Garden as my home away from home and there is nothing better than fighting there again. It is old school,” said Golovkin. “On October 5, it’s going to be a good fight. Every time I enter the ring I try to give my fans the fight they want to see, the show they deserve. This will be such a fight. We will bring back Big Drama Show to the ring of The Garden and to DAZN. Don’t miss it. You will see everything you love in the sport of boxing. See you in New York.”

“I’m very excited that my team has secured another opportunity for me to fight for the Middleweight championship of the world,” said Derevyanchenko. “I have a great deal of respect for ‘GGG’ and looking forward to proving in the ring that I will be up to challenge and fulfill my lifelong dream of becoming a World champion.

“Those in attendance at Madison Square Garden and watching on DAZN will see an outstanding battle on Saturday October 5 — I can’t wait to enter the ring.”

“They call it the Big Drama Show and that’s exactly what the fans will enjoy at MSG on October 5, live on DAZN,” said promoter Eddie Hearn. “Gennadiy has a chance to regain his World Middleweight crown and Sergiy will bring the fire – the styles should gel brilliantly for a brutal battle. We look forward to a fantastic event with a stacked card at the iconic Mecca of boxing.”

“I’m very proud to provide Sergiy Derevyanchenko another opportunity to become the Middleweight champion of the world,” said Lou DiBella, President of DiBella Entertainment. “Sergiy came very close to fulfilling his dream last year and I truly believe that his time is now against GGG, one of the best Middleweights of this era. Saturday, October 5, will be a very special night for boxing at Madison Square Garden and live on DAZN, when GGG will be tested to his limits by a true threat in the Middleweight division.”

“We’re happy to have Gennadiy back in the ring looking to reclaim a piece of the middleweight championship,” said Joseph Markowski, DAZN EVP, North America. “October 5 is just the beginning of fight season on DAZN, which promises to be the best year-end schedule in the sport.”

Tickets go on sale at noon ET on Friday with full details on prices to be released on Thursday.