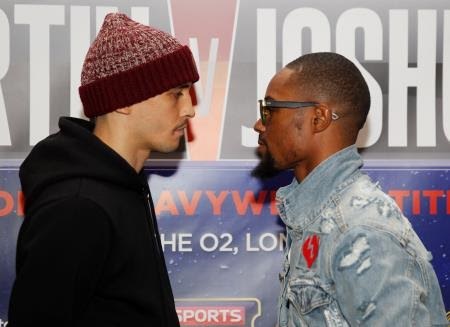 Selby (22-1, 8 KOs) vs. Hunter (21-3, 11 KOs) is the second of five scheduled featherweight title bouts in 2016 (details below), a lineup showcasing many of the world’s best 126-pounders aiming to unifying one of boxing’s deepest divisions.

Here’s what Selby and Hunter had to say during fight week:

“I will put on a devastating and clinical performance. I am going to take the fight to him. You are going to see spiteful punches and hurtful shots, so Hunter better be ready.

“I will show why I am the IBF World Champion and show people what I can do. If he wants to stand and fight, we can fight. If he wants to box, we’ll box. I haven’t needed to show how tough I am yet and that I can grit it out, because I’ve out-boxed everyone I’ve faced. However, he wants it I don’t mind. If you see me sparring every day in the gym, I just want to have a tear-up.

“You don’t win fights like that – or at least, I’m instructed not to. I’m told to box all the time but when it comes down to it, I’d love to have a tear-up.

“I’ve never had the trash talking and at weigh-ins I’ve never had anyone in my face, but it won’t affect me at all. It doesn’t change my mindset one bit.

“I’ve had a little look at him, seen his style. He’s a good fighter, he’s awkward, switch hits, has power, so it’s going to be a tough fight.

“Eric is my No. 1 challenger and he’s there for a reason. He’s going to give me a real test but that’s what I need.

“There have been some great fighters calling me out. Carl Frampton was talking about me after his last fight, Josh Warrington has called me out a lot of times and Leo Santa Cruz has mentioned me, too. There are plenty of options but I’ve got to come through this one.

“Warrington will never get to my level. He’s done everything asked of him and won all the titles I vacated, and it’s a fight that could be made straight away if he comes through his next fight and I come through mine. Warrington talks about me a lot, and it’s a fight I would definitely be interested in and if we both win our next fights. Maybe it will happen, and it would be a big fight.”

“Selby is a runner, we know he’s a runner, he boxes and runs away. He hasn’t really fought anyone yet. He beat Evgeny Gradovich, who has not really been the same since he fought Billy Dib. He just walked forward with his hands up.

“I was rated by the IBF for the longest time. I was rated higher than Lee Selby when he fought Fernando Montiel and when he got Gradovich.

“Not to be smart or cocky, but I’d never seen him fight. I never heard of him until the Gradovich fight. And with that fight, I think Gradovich was winning but Selby got the hometown decision. He boxed well. He runs pretty well too.

“I can adjust. I can fight. I can box. I got better footwork. I can bang. I can do a few things that he probably can’t.

“I’m excited about fighting in front of all these people. It gives me the chance to show off my skills. They are going to see a new IBF champion.

“I don’t need to win a war of words, I’m going to show what I can do on the night. I love the London fans, I’m looking forward to coming over there and showing them what I can do.”