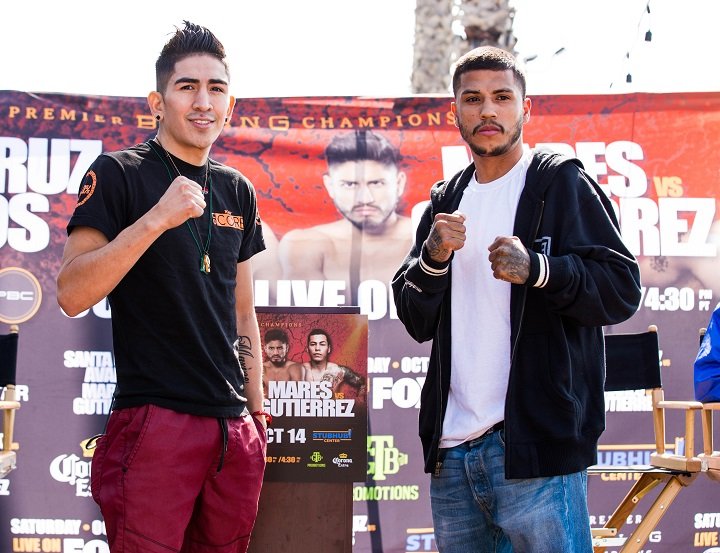 Fighters entering the ring for Saturday’s Premier Boxing Champions on FOX and FOX Deportes tripleheader event went face-to-face at the final press conference Thursday before they compete at StubHub Center.

Here is what the fighters had to say Thursday from Whiskey Red’s in Marina Del Ray:

“I’m very happy to be in this position. I’m going to give a great show to the fans. There are a lot of great fighters here and we’re all going to try to put on the best performance of the night.

“I just want to give the fans a great fight. I’m going to bring the fight to Avalos and I hope he stays in there and looks to make it a war as well.

“I’m prepared, motivated and focused. I need to win on Saturday so that I can get the Mares rematch. That’s the fight that we want.

“I’m definitely not overlooking Avalos. I know that I have to fight a dangerous guy. He’s going to come to take my belt and he doesn’t care about any fight I want in the future.

“I hope that all my fans enjoy this fight because I’m going to give it my all. We worked really hard and trained really well for this fight. I have to take care of Avalos before I can worry about any other fights.

“I always prepare the same for my opponents. People have their opinions on each guy, but I respect all of my opponents the same.

“We’ve worked on versatility during training camp. You never know how an opponent is going to come out so I have to be ready to do anything and adjust in the ring.

“It’s important for me to give the fans in Southern California a great fight. These are the best fight fans and I always owe it to them to be at my best.

“This has been another very hard training camp for me and my team. No matter who the opponent is, we work hard every day and build each other up.”

“It’s really a blessing to be here. I’m thankful to my team for giving me a strong, hard camp that has me very confident heading into this fight.

“This is a great card to be able to show my skills on. With so many high-level fighters, it’s a chance to do my best with the world watching.

“I’m happy Leo took this fight and gave me the opportunity to prove myself. I know that I still have a lot to give and this is exactly the chance I need to show everyone that.

“I’m very confident heading into this fight. Leo and I sparred a lot when we were amateurs. I’m going to take that experience and use it to my advantage on Saturday.

“I’m really happy to be in this position. I’m fighting a great competitor. He’s a hungry kid who has the opportunity of his lifetime. He’s going to take advantage of it

“I trained really hard. There were no shortcuts. It was hard training every day. Fighters like Gutierrez are the most difficult because they have everything to gain and nothing to lose.

“It feels great to be back in this position fighting in what is basically my hometown. Everyone knows that StubHub Center is the ‘War Grounds.’ After Saturday night, I’m anticipating that everyone will go home happy.

“I can’t wait to get back in that ring. I want to give the fans a great show and make sure they leave satisfied. I’m really excited to take in the atmosphere before I enter the ring and go to work.

“The game plan always changes depending on the opponent, but I’m also ready to adjust during the fight. I have to stay focused and ready. In the end I think it’s going to be a great fight for the fans.

“Robert Garcia has taught me a lot and he’s brought some extra things out of me. I’ve looked great in sparring, but now it’s time for me to bring it into the ring.

“I definitely see some of myself Gutierrez. I was once the young fighter looking to upset the established veteran. That’s why I’ve trained for this fight like I’m facing any of the champions or top fighters. I know that it’s a tough fight and I’ll be ready.

“I think this fight will make me better. I like to entertain and I’m going to give you a really good show on Saturday.

“I’m honored to be here and give the fans a great fight on Saturday. What happened before the Frampton fight is behind me. I’m prepared and I feel very strong.

“I know that Abner is the highest level fighter that you can face. I have to be at my very best to win a world title. That’s the kind of challenge that I want and I’ll be ready for anything.

“I hope that Abner is not underestimating me. I want him to be at his very best so that when I win. My plan is to go in there and fight hard until the fight is over and show everyone how I compete.

“There’s no quit in my body. I’ve worked too hard to get to this point of my career. I’m going to absolutely give it everything I have and then some.

“I want to give everyone a great fight. I’m ready for a war. I’m excited to put on a spectacular performance.”

“I had a great training camp and I’ve put all the hard work in. I stay in the gym so I’m always ready for an opportunity like this.

“My team is really important to me and they get a lot of the credit for getting me to where I am. We work hard and push each other every day in the gym.

“I get better every single time I get in the ring. This is going to be another learning experience for me as I get to where I want to go in my career. This is still only the beginning.

“Fights like these are ones that all champions have to go through before they reach the top level. It’s important to win, but also to impress when I’m in the ring.

“DeMarco is a guy with a lot of experience so I know that he thinks he has that advantage over me. All I can do is be at my best. I’m confident that my youth, speed and power will be the difference in the end.

“I can’t wait to showcase myself this Saturday and I hope to see everyone there. DeMarco is fighting for his career so I know that he is going to come prepared and put on a great fight.

“I want to thank everyone for being here and I’m thankful to be on this stage. This is another great experience for me in my career and one that I’m not going to take lightly.

“I also want to thank Eddie Ramirez for putting in the work and accepting this fight. I know that he will come prepared to give the fans a great show.

“It’s a blessing to be on a card of this magnitude. With guys like Leo Santa Cruz and Abner Mares, I can’t stress how blessed I feel. I can’t wait to get in the ring.

“I have put myself through a terrific training camp for what I hope will be a great fight. I’m ready to prove to myself. I want to show the fans that when things get difficult, you can still overcome and come out victorious.”

“It’s going to be party time this Saturday from StubHub Center. There will be a lineup of champions, including Mikey Garcia and many more, at the Fan Fest on Saturday afternoon at 12:30 p.m. Live music, food trucks and autograph signings for all fans, so make sure you show up early.

“This is a 12-fight card that is going to be a boxing festival at StubHub Center. Besides the three TV fights we have two rising Olympians in Eimantas Stanionis and Mexico’s Misael Rodriguez, the first Mexican Olympian to bring a medal home in 16 years.

“Eddie Ramirez is rising in the sport and he will face a very familiar name in boxing in Antonio DeMarco. DeMarco knows that this is his chance to prove that he still has a lot left, but Ramirez will try to add another name to his contender resume.

“Andres Gutierrez has an opportunity to go in against a true legend of the sport in Abner Mares. You don’t always get a second chance in this sport so I know that Gutierrez is going to be prepared. This is a fight that you don’t want to miss.

“Abner is a true student of the sport and he’s had a lot of great trainers in his life. We have seen what happened with how Abner reinvented himself by working with Robert Garcia. Some people had written him off, but he proved that he is still among the elite.

“The main event is another fight that will bring non-stop action. Chris Avalos knows that this is his moment, maybe his last chance, to capture a world title. These are the kind of fights that you truly can’t underestimate their opponents, because they are going to come ready to take it from you.

“Leo Santa Cruz is a true champion of this sport and truly on of its’ nicest competitors. He beings non-stop action every time he fights and I know that with this chance to perform on FOX and FOX Deportes, he will be at his best.”