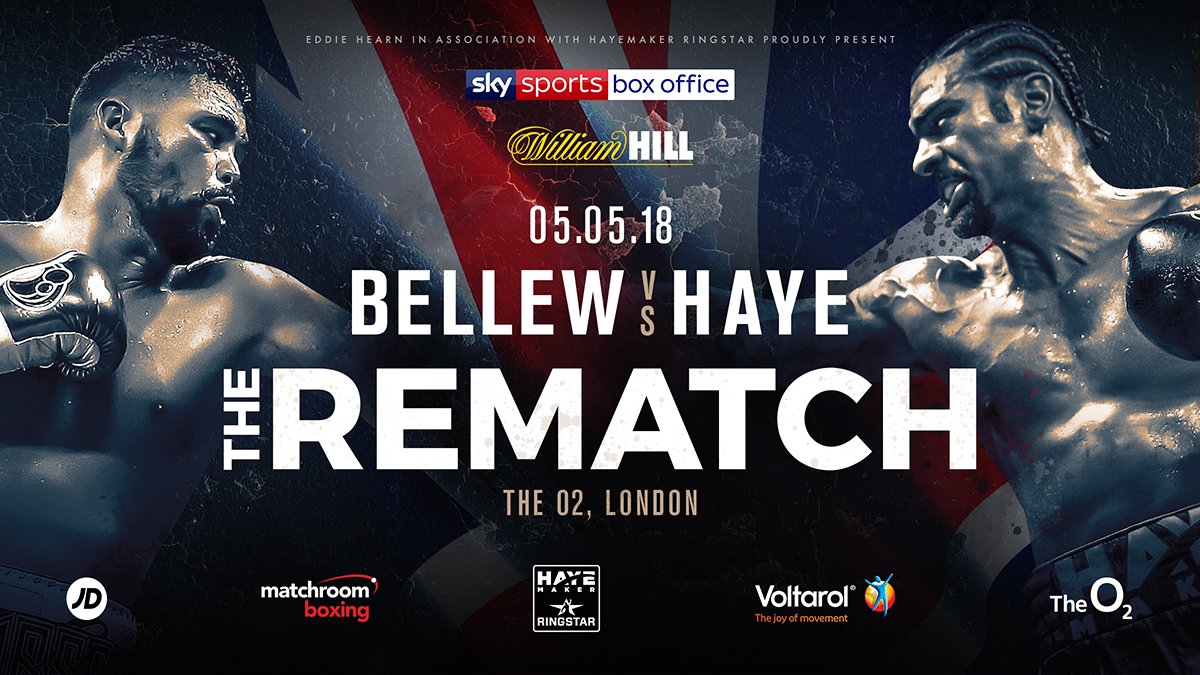 Joshua Buatsi will fight for the sixth time as a pro on the undercard of the Heavyweight rematch between Tony Bellew and David Haye on May 5 at The O2 in London, live on Sky Sports.

Buatsi has raced to 5-0 since turning over in July, ending three of those bouts inside the distance. The Team GB Rio Olympic bronze medal man tastes his first eight-rounder on his third appearance in the Greenwich venue, and the 25 year old talent managed by Anthony Joshua’s AJ BXNG is delighted to be back in action for the third time already in 2018.

“I’m happy to be back on the scene again on the big May 5 show,” said Buatsi. It’s my hometown in London which gives me that extra push to put on a display.

“It’ll be another entertaining fight I’m sure, people come with expectations which I can hopefully meet and surpass them. As AJ calls The O2 – ‘The Lions Den’ – it’ll be a fantastic atmosphere in there on fight night, I can’t wait to get back in there.”

Buatsi is part of a huge bill in London topped by the second instalment of the Bellew-Haye rivalry.

Paul Butler gets the chance to become two-time IBF World Bantamweight champion when he tackles undefeated Emmanuel Rodriguez at The O2 in London on May 5, live on Sky Sports Box Office.

Butler landed the IBF strap in April 2014 by taking it from Stuart Hall in Newcastle before vacating the strap to move down to Super-Flyweight in March 2015 to challenge IBF champion Zolani Tete.

The ‘Baby Faced Assassin’ returned to 118lbs and back into title contention when he comfortably saw off Hall in a rematch in Liverpool in September, and is rated at four in the IBF, one spot behind top-rated Rodriguez.

The unbeaten 25 year old visitor is hotly-rated having raced to 17-0 in the paid ranks with 12 wins inside the distance, a rise all the more impressive following an amateur background that was stunted by a car accident.

Rodriguez’s trip to London is his first outside the Americas since turning pro and his first over the championship distance, and Butler intends to make the trip a miserable one for the Puerto Rican and reclaim his title.

“I’m very excited for this,” said Butler. “It’s the reason we came over to Eddie in the first place, I knew he would deliver the big fights for me. We’re just four weeks away. It’s a big test but I’m confident.

“It’s an honour to contest the IBF title again. I want to win it back then hopefully defend which I didn’t have the chance to do last time.

“It sounded a good idea at the time to vacate but looking back now I should have kept hold of the belt. I should have worked on my strength and conditioning, filled out and defended my title. I’ve definitely got some unfinished business with this – it would be brilliant to go out there and win it again.

“It’s a tougher test the last time I won the title, but I’m up for the challenge. I’ve improved myself. He’s touted to be this next big superstar, but how many of them come over here and get turned on their heads?

“I never used to look at my opponents, but since I’ve linked up with Joe he’s always sending me little clips. He looks a good kid, he likes to work at midrange but in truth I don’t want to say too much about what he does and doesn’t do well.

“I don’t care how big and tough he is – we both have two arms, two legs, he’s from Puerto Rico and I’m from Ellesmere Port so let’s get it on. I can see this being a very good fight, we both like to go body to head, head to body but I’ll come out being the two-time IBF World Bantamweight champion.”

Butler’s clash with Rodriguez is part of a huge night of action in Greenwich as Heavyweight rivals Tony Bellew and David Haye clash in a hotly-anticipated rematch.

Limited tickets for May 5 remain on sale at www.theo2.co.uk

John Ryder and Jamie Cox will clash in a crunch Super-Middleweight battle at The O2 in London on May 5, live on Sky Sports Box Office.

Ryder is back in action following his brilliant win over Patrick Nielsen in October inside five rounds, a win that saw ‘The Gorilla’ take the Dane’s number four ranking in the WBA and leap into contention for major title shots.

Cox will be gunning to rob Ryder of that chance and take it for himself as he returns to the ring after challenging George Groves for the WBA World title at the top of the bill that Ryder landed his big win – and both men expect fireworks in a fight that ‘opens doors’ to the winner.

“There was talk of other fights that we were looking at, but they didn’t come off – that’s boxing. It was about picking the right fight rather than just going in there against anyone. Jamie has a good record and to beat him would hold me in good stead.

“A lot of people were writing me off before the Nielsen fight, I went in there and beat the man that was held in high regard and I beat him in good fashion. It was the best win of my career so far. The pressure was off. I was an away fighter, I just went in there and enjoyed it which was telling on the night. It was a great victory.

“Jamie had some success in the early rounds against George. He made it the fight it was but we all know how good Groves is. It only takes one shot… Just look at both my fight and his fight on the same card. Luckily my punch went to my advantage and he was on the receiving end of a peach.

“He got hit with a body shot, 9 times out of 10 you’ll take them but that one was in the wrong place at the wrong time for him and he couldn’t beat the count.

“I think our styles are geared up for a good fight, it’ll be a real treat for the fans on what’s shaping up to be a quality night of boxing.

“The British Title has evaded me for so long now, it’s a love hate relationship. I’d love to win it but I can’t build my career around the British Title. I’m taking things one fight at a time, Jamie Cox is my full focus.

“For the winner it opens a lot of doors, the loser it could be curtains potentially. It’s a must win fight for the both of us.”

“I’m looking forward to this one,” said Cox. “Facing Groves was a great experience, I know where I went wrong and I’m ready to prove where I believe I should be.

“I had a couple of weeks off after the last fight then it was time to get back stuck into training. I’m fully back into it now and ready for the next one.

“John put on a great display against Nielsen, it was a grand finish so hats off. Obviously, I didn’t see it at the time but I’ve seen it back since. Fair play to him, he got a big win.

“I’ve always been quite tough to the body. Groves wasn’t hurting me to the head, so I didn’t think he could hurt me to the body. To be fair he landed a great shot, full credit to him. I think George will go on and win the final against Callum Smith.

“John comes across a gentleman. It’s business at the end of the day. I know what he’s about, I’m expecting the best John Ryder. I’m looking forward to mixing it with him. Beating him will put me in a better position and nearer to a World Title shot.

“He’s ranked across a couple of the governing bodies and it’s my goal to become a World Champion. Beating John will open more doors, especially with the tournament finishing soon. It should free up some of the fighters. This fight has come at the perfect time.

“It’s going to be a tough task, he likes to come forward and have a go and I’m always up for the fight. There will be some big shots landed, it’s a great fight for the fans. I’m looking forward to breaking it down the gym with the team and the build up to the fight itself.”

Ryder and Cox clash on a huge night of action in Greenwich as bitter Heavyweight rivals Tony Bellew and David Haye meet in a rematch and Martin J. Ward defends his European Super-Featherweight title against James Tennyson.

Limited tickets for May 5 remain on sale at www.theo2.co.uk