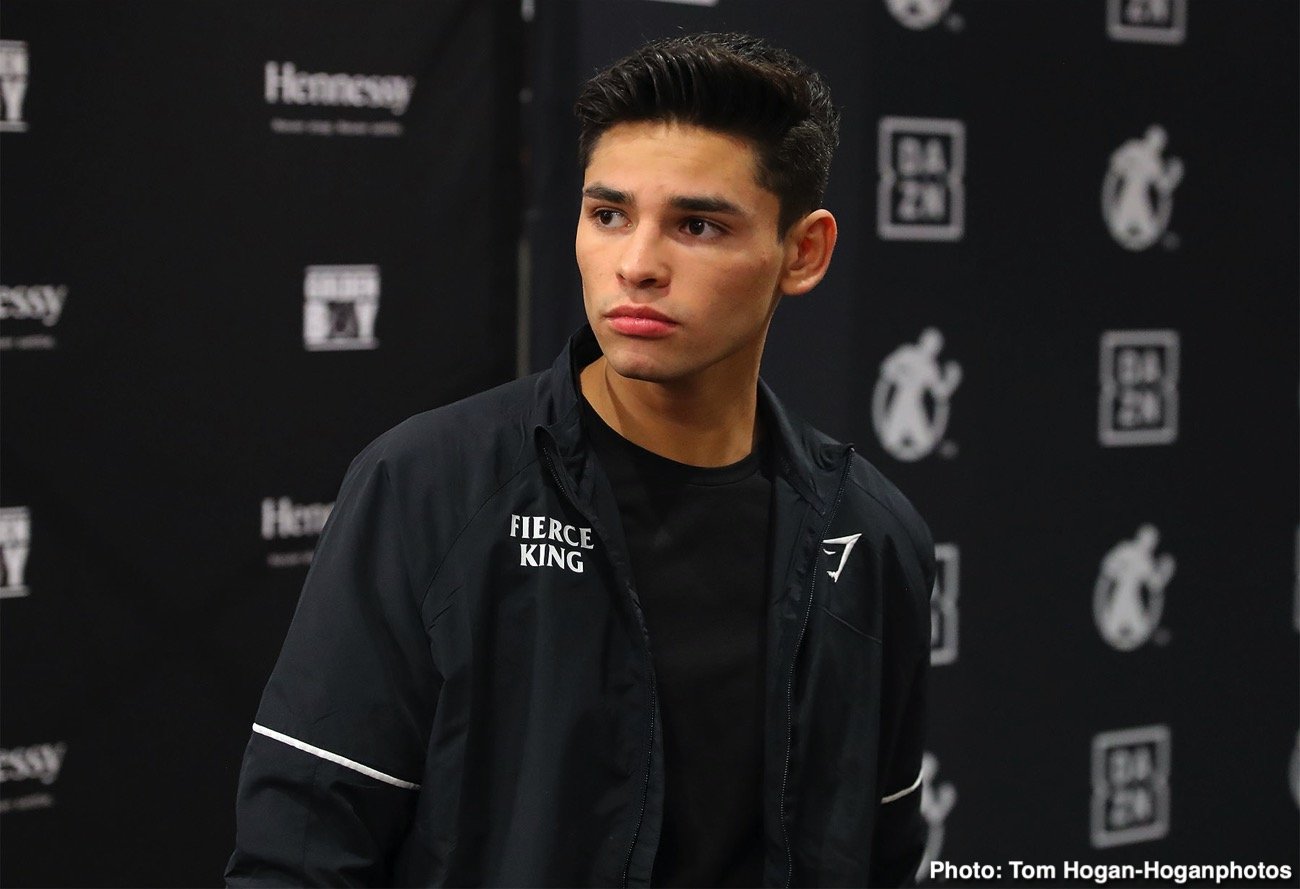 Henry wants Ryan to fight possibly Jorge Linares, Luke Campbell or Lee Selby first in the summer before taking on Tank Davis in December. The original idea was for the young 21-year-old Garcia to face former three-division world champion Linares (47-5, 29 KOs) and he still may, but Henry questions whether Ryan will receive credit for beating him.

Linares is 34-years-old, and he’s not young obviously nor is he the fighter he once was. What Henry doesn’t want is for Ryan’s accomplishment in beating Linares to be discredited by fans and the boxing media afterward. That’s why Henry likes the idea of having Garcia fight Luke Campbell or former IBF featherweight champion Lee Selby, who he feels are both still in their prime.

“I think the fight between Ryan and Tank is going to happen in December. Yeah, it’s going to happen this year,” said Ryan’s dad Henry Garcia to boxing media. “We’re already planning and everybody has agreed to it. He [Gervonta] said he’s going to go after Leo Santa Cruz or something like that.

Ryan will likely need to look good in his next fight in the summer for his fight with Tank Davis in December to go ahead. Garcia’s promoters at Golden Boy Promotions probably won’t give him the green light to face Gervonta if he loses to Linares, Campbell or Selby or if he looks bad in winning. The important thing is for Ryan to look impressive in winning that fight.

Linares already beat Luke Campbell by a 12 round split decision in September 2017. Henry seems to be under the impression that Campbell is younger and in the prime of his career, and that Ryan would get more credit beating him. Campbell is 32, and just a couple of years younger than Linares.

I’m not sure if Henry is aware that Campbell is roughly the same age as Linares, and that he’s lost to the only good fighters he’s faced as a professional. Campbell was beaten recently by Vasiliy Lomachenko by a one-sided 12 round decision last August in London. Campbell will be fighting Javier Fortuna for the vacant WBC lightweight title on April 17.

“I’ve always told people and just like Fury. Fury is a boxer. A boxer can always beat a brawler, and Ryan has got just as much experience as Tank Davis,” said Henry. “Ryan has got 225 amateur fights, and he’s got a strong pedigree. He’s got 15 nationals. So there’s not a style that we don’t know out there.

‘Plus, Ryan has got the height. He’s 5’11”, he’s got speed, and he’s got the power and the distance. Look what happened right now [the taller heavyweight Frank Sanchez beating his shorter opponent Joey Dawejko]. Sanchez used his height and his distance as an advantage, right? So that’s what we [Ryan Garcia] plan on doing [against Tank Davis],” said Henry.

Ryan does have the advantage in boxing skills over Tank Davis, but we don’t know if he’ll be able to hold up under his power. Davis is a big puncher, and Ryan is straight up and down fighter. The lack of offensive variety for Ryan could give him problems against a talented fighter like Tank Davis.

Right now, the only punch that Ryan throws is his left hook. He’s forgotten about his jab and right entirely. He just looks to land his left hook, and that’s something that a talented fighter like Gervonta will take advantage of potentially.

It’s going to be difficult for Ryan to keep Tank Davis from walking him down, and landing his big uppercuts. With Ryan standing upright, he’s going to get hit hard to the body and head from Tank. Carlos Morales gave Ryan major issues in their fight a couple of years ago, and Tank would be a lot tougher.

Kingry Ryan Garcia will use reach against Tank

Ryan, to me right now, he’s a very smart boxer. He’s going to use that distance, and he’s longer. Its’s going to be bad for Tank. Look what he did to [Yuriorkis] Gamboa. Look how long it took to finish him, right? That should tell you something. He’s [Gamboa] not a joke, but he was injured. If Ryan knows that you’re injured, watch what he does to you. He’ll get you out of there.

“Ryan, right now, I want him to fight Tank when he’s 22-years-old, okay? You’ve got to have full man strength, and I figure at 22, he’s going to have full man-strength. Right now, he’s 21. That’s why we’re holding back until the end of the year. Ryan turns 22 in August. So we’re good. We’re in no rush here,” Ryan’s dad said.

Ryan will obviously have success with his height and reach against Tank Davis. The only question is for how long he’ll be able to do that? Can Garcia hold Gervonta off the entire fight to shut him out completely? With Tank’s power, he can end the fight with just one big power shot or he can hurt Ryan. Once Ryan is hurt Davis is an excellent finisher, and it’ll be difficult for him to escape the round.

It would be good for Ryan to face Linares first before he takes on Tank Davis because he needs experience before he steps up to that level. Campbell is a poor option, as is Lee Selby, who for some reason Henry thinks is still in his prime. Selby, 33, isn’t in his prime. That’s why he lost his IBF featherweight title to Carl Frampton in 2018. In Selby’s last two fights since he’s looked poor in beating Omar Douglas and Ricky Burns.

“It’s not 100 percent. Negotiations still have to happen, and we got to go back and forth,” said Henry when asked if Ryan Garcia’s fight with Jorge Linares is certain for July. “But there are other fighters are out there as well. I love that. I think that was a very good question because that’s how we feel,” said Henry when asked if he thinks Ryan will get credit for beating the 34-year-old Linares, who is perceived as being old by some boxing fans.

“If we beat Linares what are people going to say? He was past his prime, you know? It’s a good fight, but it’s hard to please people. That’s why if you’ll notice, Ryan has been fighting people at their prime, right? He fought [Romero] Duno, he fought [Francisco] Fonseca. He fought Jose Lopez. These guys are at their prime, and they got their man’s strength. So if it’s working, keep on doing it.

“Luke Campbell, Lee Selby and people like that,” said Henry when asked who he wants Ryan to fight. “People, that are right there [in their prime? To me, that makes more sense. We started when he was 7-years-old. That’s the advantage that we have. When you start someone at 7-years-old, he hasn’t stopped. Ryan’s worth this is amazing. He hasn’t stopped.

“He’s not one of those guys that sits around, and gains 20 pounds or 20 pounds,” Henry said of Ryan Garcia. “He’s always in shape, and always working out. He starts itching after two weeks [of not fighting]. ‘Man, I’ve got to do something.’ Of course, I want to hold him back, because everything is a process, but I think more importantly is his man-strength. To me, that’s more important than anything. These guys are tough. They’re tough,” said Ryan’s dad.

Ryan would definitely receive credit for beating Linares, as long as the victory was conclusive, and he looked good. Linares might beat Ryan, so perhaps Henry is thinking of excuses for why he shouldn’t take that fight.

“Ryan is a superstar right now and he’s giving up exactly what you want, knockouts,” said Henry Garcia. “And these are people that people don’t even expect to get knocked out, and he’s giving you that. It’s called entertainment. He’s entertaining you guys. That’s a good thing, right?

“That fight in December is going to show, right?” said Ryan’s dad on his fight with Tank Davis in December. “A lot of people still have doubts, but I’m telling you, we don’t have doubts. That’s the most important thing. How we feel, right? Everybody can be critical and say, ‘Nah, he’s not ready. He’s going to get knocked out.’ I know that but we know there isn’t a style out there that Ryan hasn’t seen,” said Henry.

Ryan’s dad has lowered the bar for what constitutes being seen as a superstar in boxing. Garcia isn’t a superstar. He’s a prospect/contender level fighter with a lot of questions that need to be answered about whether he’s the real deal. It’s a bad sign that Henry is showing doubts about wanting Ryan to fight Linares in July because that’s a fight that will tell fans all they need to know about Garcia.

If Ryan beats Linares and looks good, then he may be the genuine article. But if he loses, looks poor in winning, or if he dodges the fight altogether, then you have to figure that he’s not the guy that some boxing fans believe he is.